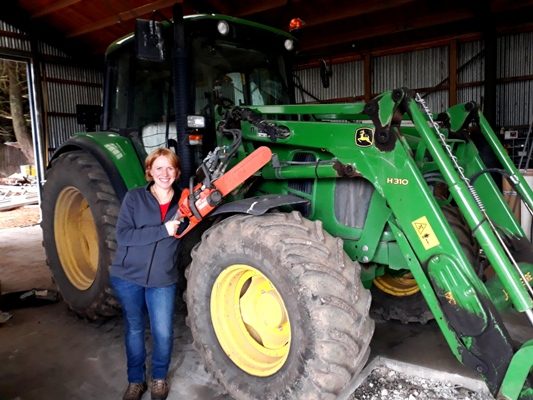 An important mission for firewood led to an incident with tractor tyres. Charlotte Rietveld reports.

It’s been a rough couple of months. As many farming couples will know, maintaining working relations with one’s beloved can be a delicate balancing act. As anyone working on farms with an intergenerational component will know, keeping the Gold Carders happy is an even more precarious feat. Sure enough I’ve managed to trample roughshod over both.

Predictably, my transgressions with both Vince and The Boss involve a collision between that which is dearest to their hearts – mechanical equipment, and to mine – heating. There is little that gives me more delight than a well-prepared, ample store of firewood. In contrast, it would seem there are few possessions as precious to your average rural bloke as tools and machinery.

I once heard a wise man utter some well-versed advice to a couple of young bucks. In gruff fashion he had them captivated, “Listen here lads, there are two things you never lend; your chainsaw or your wife”. I won’t mention any footnote he may have added.

Taking a leaf from my maternal forebears, from this I learned not that I mustn’t use my husband’s tools, but instead that I must be far more cunning when doing so.

Obviously, I’d hate to be supporting the notion that one’s wife is a possession and I won’t even venture near the subject of lending. But I remain unsure what his advice would be if, as it was for poor Vince, it’s your own wife borrowing your chainsaw.

As it happens, said saw was in the same sorry state as my own chainsaw; out of fuel and out of oil with a dull chain to boot. Thus to my defence, I never actually ‘used’ my husband’s beloved chainsaw. But that was wasted breath, blatantly insufficient defence for me to be spared the blame the moment his chainsaw wouldn’t start for him.

My normally gentle-toned husband was reduced to a muttering monologue of grieving fury from which I could only make out one oft-repeated phrase: “Don’t touch my chainsaw. My chainsaw.”

Taking a leaf from my maternal forebears, from this I learned not that I mustn’t use my husband’s tools, but instead that I must be far more cunning when doing so. I applied this logic soon after, when again out doing some farmyard borrowing. This time not from my husband, but my father.

The Boss had headed off to town on urgent business, which as is always the case, mysteriously materialises on a Friday afternoon. For years as children we thought our father was an admirably studious man that many a Friday evening he would announce he was off to ‘The Library’. It took a long time for the penny to drop that the fountain of knowledge known as The Library was in fact an on-tap chilled fountain of local knowledge.

But I diverge. The opportunity for some discreet mechanical borrowing had presented itself. Still in pursuit of my heating nirvana, it was clearly the perfect time to borrow the tractor for a bit of private firewood transportation.

Well-stacked into wooden potato boxes, I was on firewood load number three when a bottom plank fell off a box leaving no time to stop as tractor tyres met upturned nails. Ever the optimist, I convinced myself I probably didn’t actually run over them and even if I did, it was unlikely to damage a thick tractor tyre.

In keeping with my recent revelations, I knew that this tenuous balance of possibilities called for discretion and cunning. And so it was I returned the tractor to the shed and said absolutely nothing.

The next morning The Boss was scratching his head as to how all of a sudden his tractor had an utterly flat tyre. I was compelled to confess that I might have borrowed his tractor and I just might have run over a nail. The repair of which ended up taking a full week as one nail hole became three.

And so it is that I am out of favour on all fronts.

Never lend your chainsaw gentlemen. Nor your tractor. Least of all to your wife.

And ladies, don’t let any of that hold you back. Do keep up with the cunning.