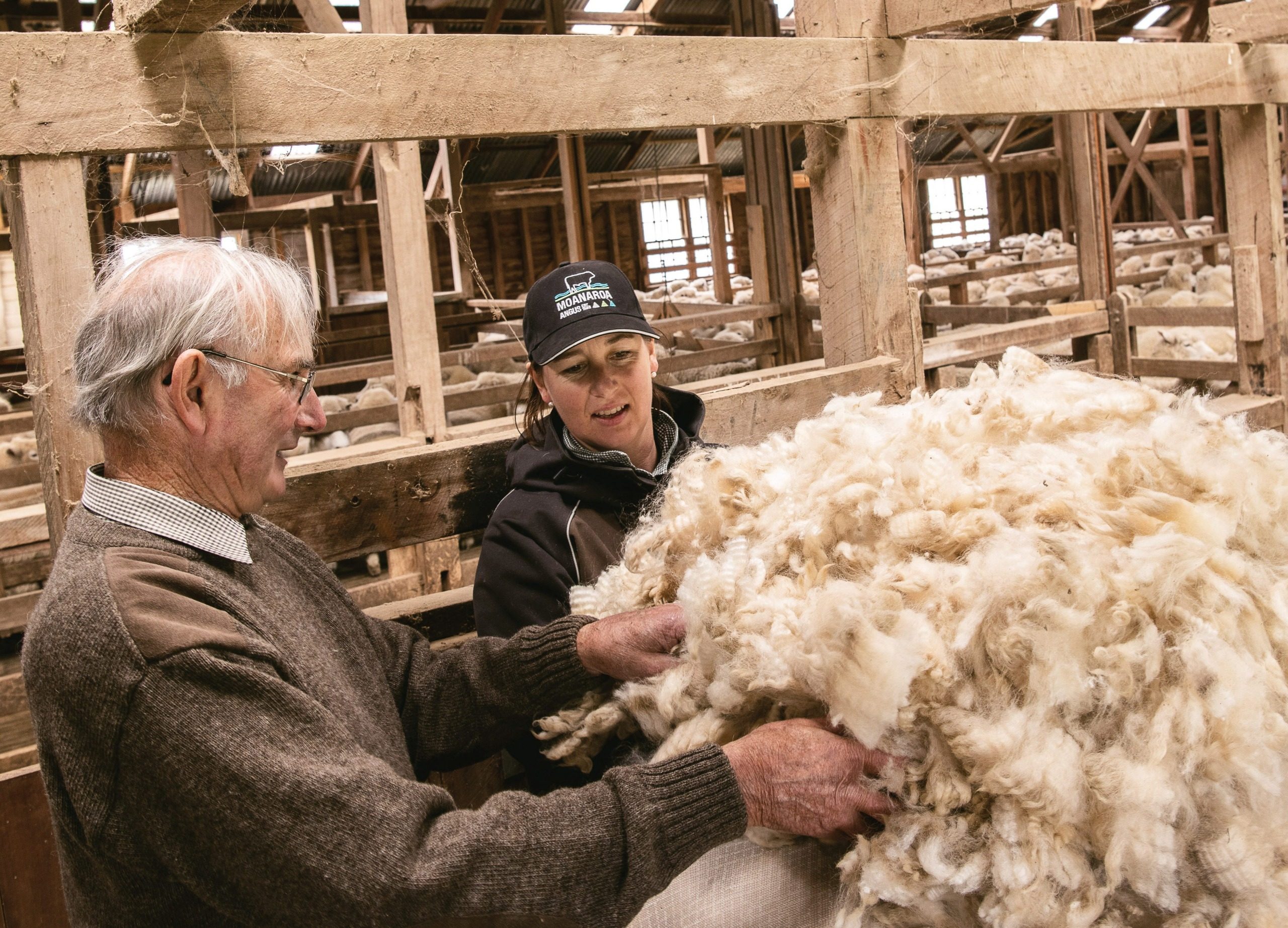 After a lifetime working with strong-wool sheep, Dan and Barbara Ramsden are moving on from the family’s farms. Terry Brosnahan reports.
Photos supplied by Ravensdown.

Dan Ramsden is a wool man. He has grown and worked with wool all his life.

It has been a major focus of his farming of Moanaroa and Ware Ware stations, near Dannevirke.

The two stations produce about 70,000kg of strong wool.

Dan and his wife Barbara have retired from farming and are moving to Havelock North.

There is a 400ha finishing block at Pongaroa. They also run cattle and sheep studs. The land is in trust and the farms are run under a family company structure.

Dan may have given up control of the cheque book but will still be involved with farming, especially wool.

Born in Dannevirke on the last day of 1939, Dan grew up on the family farm at Kumeroa near Woodville.

In 1959 Dan gained his wool diploma through Massey University, just in case he had an accident and had to take a new direction in life.

In the end he did farm all his life but never went wool classing outside of the family farms.

Dan thought he would’ve got more experience on other farms but in those days farmers were very protective of their wool.

He married Barbara in 1970. In 1971, when both were 30 years old, they took over Ware Ware Station near Dannevirke, about 15km from the coast. Barbara had inherited her mother’s quarter share of another farm and swapped it with her brother for Ware Ware.

Ware Ware means forgotten and it was like that when they went there. They had a 70% lambing in their first season from the Romneys. Dan had never lambed so many sheep in his life. He still hasn’t.

He gave a grim assessment of the situation to Barbara, “if we don’t do better than this then we will be walking down the road.”

They brought 200 ewes with them but had to buy more. Fortunately they were able to bail half of the livestock. Barbara’s aunties owned the sheep and they paid a rental of $2/head/year.

Dan had no family money until 1980 when his brother paid him out of the 607ha family farm.

He was one of four children so it wasn’t a big payout. His brother also bought him out of the 61ha block they were partners in.

In the 1980s the Lange Government changed the taxation laws. No one wanted to pay the tax on the livestock valuation write-up. So the Ramsdens had to borrow the money to buy the livestock.

In 1980 Dan took over as supervisor of Moanaroa at Akitio. It had had managers since 1943 and had not made a lot of progress. Half of the place was topdressed every third year. The lambing was barely 100%, now it’s 130%. They dropped about 1000 ewes after the end of the ‘skinny ewe subsidy’ but still produce 6000 lambs.

Dan lifted the quality of the wool on the stations, especially colour. The stations shear early so moisture and heat don’t ruin the colour. After rain the wind on the coast dries out the wool and keeps the colour bright.

He selected rams for wool with good character and what he calls 46 or 48 in the old standard which is about 35 micron. He uses the old standard for selecting ram hoggets rather than trying to put a micron on it because it varies from year to year.

He grew the unregistered stud on Ware Ware which supplied Moanaroa to 500 recorded Romney ewes. At the peak he was selling 200 rams to clients. It still has 300 recorded ewes.

In 1989, with permission from councils, they trucked 500 beef cows to south of Hunterville and two shepherds with a caravan drove them home, grazing the roadside for a month. Water was difficult to obtain in the holding paddocks due to the dryness. A lot of whisky changed hands.

As Country-Wide went to print Moanoroa was facing a spring drought as little rain had fallen, only about 40mm in July and August respectively.

A big change under Dan’s watch has been the increase in fertiliser which allowed them to normally fatten all the lambs and most of the cattle. In dry years some lambs are sold store.

He preferred selling wool by auction and was not afraid to hang on to it if it didn’t meet reserve. They sell wool to Primary Wools on contract.

The Ramsdens are also supplying Big Save furniture with strong wool at $4.50/kg to make into furnishings (see Country-Wide August, 2021).

Dan is worried about the impact carbon forestry is having on the future of livestock farming with 80,000 livestock gone from the district. Landowners can make more money out of carbon credits than livestock. This has impacted on the rates which were up $16,000 last year. The studs have lost clients, especially the cattle stud.

He still sees the future of wool as bright.

In the short term, once most people are vaccinated, economies around the world will start to recover. It took about five years after the Spanish flu, but hopefully it will be a lot shorter and people will start using more wool sooner.

He believes long term consumers will move away from plastics and carpet manufacturers will move from nylon back to wool. However, it has to be at an affordable price and wanted by consumers.