What’s Plan B for your farm business? Could someone step in and run it tomorrow without any direction from you? If you suffer a serious accident or worse and the answer to that question is no, then you and your family have a problem. In the first of a series, Country-Wide writers look at Plan Bs.

Keep farm systems simple to help make the business manageable in the event you’re suddenly taken out by illness or accident, says a South Canterbury farmer who has first-hand experience of such a situation.
In June last year Andrew Hurst found himself under the farm ute, looking at the sole of his boot and thinking that’s odd, you can’t usually see it like that. The boot was still on his foot but the shin was shattered and bent double.
“There was bone sticking out through the trousers. It was pretty gory.”
He’d been riding a motorbike up the farm drive to grab another fence tester from the house when the ute, driven by his farm worker, crossed the drive, coming over a sharp blind brow on to it.
“I just happened to be in exactly the right place for us to collide,” he recalls.
Neither he, nor the worker, were going particularly fast but they couldn’t see each other as they approached the junction and as the only two people working on a 2300ha farm, neither expected anyone or anything to be crossing their path.
“I remember seeing the Toyota emblem by my right elbow and thinking this isn’t good. I hit my head on the bonnet then went straight underneath. My leg was trapped between the bike and Hilux.”
Judging by the dent in the ute bonnet, he reckons his bike helmet was probably the first thing that saved his life. Then, as Josh went to fetch help he says he could feel the life draining out of him, so wriggled round to get his head, and the blood-flow to it, downhill.
“What I didn’t realise at the time is that doing that bent my leg round and slowed the blood-flow, which is probably the second thing that saved me.”
Police were first on the scene, then St John Ambulance, the Fire Brigade, two doctors from Fairlie, and within about half an hour, the Westpac helicopter which took him to Christchurch. Awaiting surgery, he was warned he might not have the leg when he woke from anaesthetic.
“Apparently the thing that saved it was they could still make my toes wiggle even though the foot was only hanging on by a thread.”
Eleven months later, including a second spell in hospital with amputation again on the cards due to infection, he’s at home but physical farm work is still impossible with his leg in traction, growing new bone.
Reflecting on the experience, there are things he’s keen to relay to other farmers so that if they should suffer a similar misfortune, the disruption to the farm business and their families will be minimised.

One of those is ACC’s CoverPlus Extra option. “It will pay for someone to do your job. I’d recommend every farmer gets it.”
That’s especially important for owner operators with no staff, he believes.
“If you’re on your own and no-one apart from you knows when, where and what to do to keep things running on the place, you’re going to have to get someone pretty good to come in and do it, and that’s expensive.”
In his own case, he’s grateful he and wife Jo, who works off-farm, had employed their then worker, now farm manager, full-time a year and a bit before the accident.
“He already knew the systems of the place because he’d worked here in his holidays while he was a Lincoln student and had gone through a winter with us. He became a farm manager overnight. He was dropped in the deep end.”

Besides, who is going to run the farm, there’s also family income to consider.
Hurst says his standard ACC (CoverPlus) has worked well in meeting his medical needs but loss of income cover is only 80% of the previous year’s income, as recorded in the accounts. Given the nature of farming, that can be highly variable, so you could find you’re getting 80% of not very much, he warns.
“With CoverPlus Extra you can nominate an income figure.”
He also reflects that he and his family would have been much better off now had they taken the life insurance policy they’d just looked into shortly before the accident.
“It can cover mortgages etc… you just never think something like this is going to happen to you.”
Another point he makes is the value of regular, reliable contractors who, over the years, come to know the farm and how things are done. They might not be the cheapest every year but in the event of an accident such as his, or worse, they’re generally ready, willing and able to come in and do tasks such as shearing, silaging, spraying and sowing with minimal direction.
“If you’ve shopped around on price and changed every year that’s much less likely to happen.”
Similarly, building strong relationships with farm service personnel, such as his Ravensdown representative, will prove invaluable.
“She’s been a fantastic support, helping Josh manage the feed crops.”
He also has some advice for those offering help to someone who’s just suffered an accident such as his own: look for a specific job that needs doing, and say you’ll come in and get that done.
“Everyone wants to help but farmers don’t like accepting help, even if it’s needed. What you need is someone to say ‘I can see that mob of ewes by the gate need crutching. I’ll just get that done for you.’”
While some individuals and organisations advocate writing detailed farm procedures to inform anyone having to pick up the reins after an accident such as his, Hurst believes that’s not so important if the business has good relationships with contractors and suppliers, and keeps a thorough farm diary. A simple flick back through that should inform a newcomer as to what needs doing when and by whom, he points out.
Another key point he makes is to keep farm systems simple, and where something is complicated for historical reasons, such as a tap hidden under a paint-pot for frost protection, half-way down a paddock behind a shed, or a quirk to starting the farm generator in cold weather, fix it so that someone coming in doesn’t need that niche knowledge. Such quirks aren’t practical to document in any case, he adds.
“We’ve all got things on our farms that only we know how they work. Try to minimise those so that any reasonably capable person could come in and do the job.”

With hindsight, Andrew Hurst wonders whether he should have seen the potential for the freak collision that nearly cost him his life, not to mention a leg.
“I’d been away in the North Island for three nights to go to a bull sale and only been back a couple of hours… so I was riding the bike, looking where I was going but with all these things going through my head I wasn’t really registering what I was seeing, other than the obvious.”
The obvious was the clear track up to the house ahead of him. What he might have realised, he says, is that the Hilux he’d seen pull out of the shed in the yards below a minute earlier might come up the track hidden from his view and be about to cross his path.
“I couldn’t see it coming, but if I’d been more alert, I might have realised it could have been coming up that track.”
His comments echo what he says a WorkSafe audit of the farm not long before the accident had emphasised. “It was more about attitude to health and safety than the physical things.”
The farm’s machinery is professionally maintained to minimise risk of brake, steering, or other dangerous failures, and Hurst says he’s always worn helmets when riding farm bikes or quads. Roll-over protectors on the quads have proven an invaluable investment and every farmer, even those on the flat, should fit them, he believes.
“A steer flipped me over on one on a flat paddock and I just got out and put it back upright again… If you were lying in a hospital bed with your neck broken and you were offered the chance to walk again for $1300 you’d take it every time.”
The blind cross-over, which had been there for ten years without incident since a drive cut to a new house site created it, has since been blocked with a barrier and will remain so until it’s reworked with a bull-dozer to improve visibility. 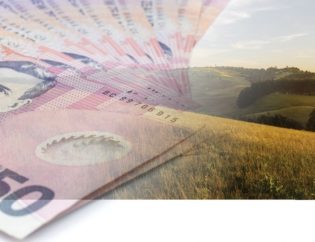 vamtam-theme-circle-post
 Category Country-Wide: Exclusive
Peter Flannery I was posed the question. “How do you get a bank loan?” The...
Read More

vamtam-theme-circle-post
 Category Country-Wide: Exclusive
Farming and building have similarities. You’ve got a framework and you shape it in a...
Read More

High productivity in hidden valleyBuilding a stable beef future