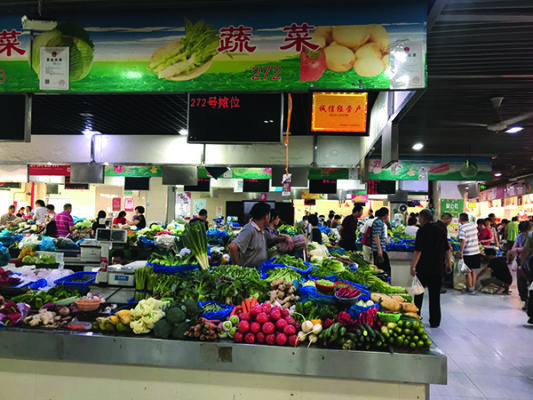 There has been a lot of talk about Chinese wet markets, especially around one market in Wuhan. There was some research which came out from Beef & lamb New Zealand saying wet markets in China have been banned. This is not the case.
Wet markets that I use in China, are a lot like the farmers’ markets in NZ. I regularly shop at one in Shanghai for fresh vegetables, fruits and some meat. I have never seen any imported products for sale at any of the wet markets I have visited during my thirteen odd years of living in China.
What clearly should be banned (and was after SARS) are wild food markets full of live animals. These types of markets are not very common in China and I was surprised to hear that a market like this was even operating in the city of Wuhan. It will be a challenge to change habits and remove places like that in China, but the Chinese Government has made moves to ban these types of markets.
Studies have shown that wet markets are the cornerstone of China’s food distribution system. Even in the middle of winter and when the Covid-19 situation started there was no panic buying or major price increases of food in China. There is always some pricing increase around major holidays (especially during winter) and by the middle of February prices at these markets were back to normal.
In the early 2000’s supermarkets tried to replace wet market in a bid to “upgrade and modernize” Chinese cities. Faced with this challenge, wet markets made major improvements to both sanitation and hygiene. Now they continue to thrive throughout China and other parts of Asia, and as of 2019 there are nearly 1000 wet markets in Shanghai alone.
Even though it is the backbone of China’s food supply, it is not a channel for NZ products. It is a high volume, low margin sales channel, where consumers are only looking for what is fresh, cheap, and the best value at the time of shopping.
Wet markets and supermarkets did not close over the past few months, and at one point they were the only places open. Shanghai was never locked down as NZ has been, but some other parts of China were. When Covid-19 started it was the middle of winter and nothing was open in Shanghai. People stayed at home. There were plenty of restrictions on the number of people in shops, buildings, and public places. Most of these restrictions have now been removed.
You often see in the NZ media that China is back to normal, but is it?
From a personal perspective the only thing that is different is that people are wearing facemasks. Outside of that you can just about do everything normally, and even bars are back up and running. Hotels and the tourist industry has very slowly restarted and during the May Day Holidays (May 1-5) internal travel was down about 70%.

For businesses in China it is a different story, and things are really tough. China’s e-commerce is leading the world in innovation. NZ companies could learn a lot from what happens in this space in China. Even though online food sales massively increased in February, this increase was not enough to offset the overall downturn in sales of major players, Alibaba and JD.com
In February, people bought food online but not much else. Things are slowly getting back to normal with all online sales. It is going to be interesting to see if consumers continue to buy large amounts of food online.
Logistics into and around China had plenty of issues in early February but most things were back to normal by March. SF-Express (SF) is one of the largest courier companies in China. Their delivery volumes are down. By how much it is not clear but in my Shanghai office building, it is considerable. Talking to my SF-Express delivery guy, my office building is down 50% in volume of deliveries and pickups compared to pre-COVID-19. We are not a large office building, seven floors with only about 140 or so small companies. The office building next-door is a little smaller and is 100% down in volume as all the companies have closed or moved out. This is only a small snapshot from downtown Shanghai, but it’s one thing to be open and another thing to be busy.
Many companies are adjusting their business model to keep going. One high profile example is BYD (Auto Company based in Shenzhen). In late January they started to make both facemasks and bottles of disinfectants. They built their own production lines and had about 3,000 engineers involved. Now they are the world’s largest producer of facemasks, about five million masks per day. They also produce about 300,000 bottles of disinfectants per day.
Some companies are investing into pig farming. Both Vanke (Chinese second largest real estate developer) and NetEase (large technology company) have started to invest into this area. There are still plenty of challenges within the Chinese pork industry because of African swine fever, but it is interesting to see that pork production is still an attractive investment.
China is back up and running but is experiencing plenty of challenges.

• Hunter McGregor is a Chinese-speaking Kiwi who has been based in China since 2007. In 2015 he started importing, distributing and marketing NZ venison to the top hotels and restaurants around China. He is the only Kiwi based full time in China selling NZ meat and offers valuable insight into what is happening in the Chinese market.