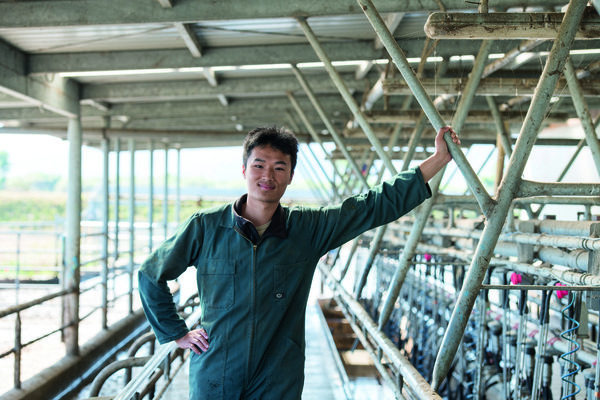 Coming from a city of 8 million, James Luo had no experience of farming. Now the Massey University agricultural science student is working his summer holidays on a Manawatu dairy farm. Jackie Harrigan reports.

Working as a summer student has been a great way to learn the practical skills involved in dairy farming for the ‘smiley man from Nanjing.’

Shixiong Luo, or James as he has renamed himself for the ease of his Kiwi student mates and Massey lecturers, has been in New Zealand studying for three years now and has “just a couple of papers” left to complete on his Bachelor of Agricultural Science degree.

Young Country first met James at the end of 2014 when he entered the ‘Test Drive your Dream Job’ competition as part of the Land Your Dream Job campaign run by NZX Agri during that year.

James had come to NZ to attend Auckland’s Taylor Institute to learn English language and foundation studies before entering university as an overseas student.

He won a Test Drive prize and spent a day on a Manawatu dairy farm with farm manager Hayley Hoogendyk. He loved the cows, the farm, the bike and Hayley’s friendly guidance and enrolled in an agricultural science degree at Massey. He was also  awarded $1000 towards his fees as part of the prize.

Hailing from the southern Chinese city of Nanjing, with a population of 8 million, James’ only exposure to farming was the Japanese farm simulation role-playing video game, Harvest Moon, that he loved to play. The main anime character was adapted from a comic and was a boy charged with tending his absent father’s farm which had fallen into disrepair.

Fast forward three years of study and James is working for the summer on the 700-cow low-input Tiakitahuna dairy farm of the Tocker family and being entertained and trained by young brothers Russell and Zac.

The Tockers employ a summer student every year on their 240-hectare Manawatu dairy farm, 120ha of which is on the flood plain next to the Manawatu River. Having a student is a great way to meet different people and they enjoy the banter and the opportunity to help a young person to enjoy working in the industry, the brothers say.

“Working through the summer on the farm is a lovely environment and its really enjoyable – students get really hooked on the dairy farming over the summer,” Zac says.

James is loving the experience and has been milking night and morning through the 40-aside herringbone shed, fencing, feeding calves, shifting the effluent irrigator, learning how to trim cows’ hooves, grubbing thistles and treating mastitis cows with teat treatments. The brothers also run a 190ha beef run-off, finishing 300 beef cross calves so James has been shifting stock.

Last summer and then during the year James worked for the small organic Biofarm operation on the outskirts of Palmerston North. The Tait-Jamieson family run an organic 120-cow herd, milked through a 16-bail rotary and make Biofarm organic yoghurt on their onfarm yoghurt factory.

A huge benefit of work experience for the young Chinese man has been the opportunity to experience different systems and farming methods to enhance and bed-in the theory he has learnt at university.

The Tocker brothers are the fourth generation on the family farm dating back 98 years to the original 60 acres of Tocker land and are now equity partners with their parents.

Zac did a geography degree at Otago before farming and Russell completed the Diploma of Agriculture at Lincoln and both have been active in Young Farmers over the years so know what appeals to young students in terms of work and banter.

James was treated to a “huge leg of lamb” for a celebration dinner with the family when he received his 2017 university results. As an only child, his own family in Nanjing are supporting his study financially – no small task when international students pay six times the amount Kiwis pay for university fees. While his parents are pleased he is studying at university they thought that his choice of agriculture was ‘very odd’.

“But they said it was up to me as long as I try my best,” James says.

The Tocker family started milking Shorthorn cows in their herd in the 1970s and Russell and Zac recently bought a complete herd of Oakley Stud Shorthorns, bringing the number in the herd up to 120 of the rare breed called Tiakitahuna Milking Shorthorns.

Russell is now a member of the Red Breed Genetics Shorthorn Board for proving young bulls and the brothers enjoy being involved in the Central Districts group of breeders.

“Five years ago there were only 5000 Milking Shorthorn cows left in New Zealand, as the breed was slow to take up AI in the 1950s which held them back,” Russell says.

Russell and Zac’s enthusiasm for Milking Shorthorn cows is also rubbing off on James, who says the cows are very friendly and have a good temperament.

“They don’t kick the cups off much, which is good.”

They also have very good udders and teat structure which makes them last longer in the herd, he says.

Russell and Zac also value the cows for their real efficiency in converting pasture to milk on the low-input farm, where no supplements are brought in and the young replacement stock are reared on the milking platform.

“We have less lame cows among the Shorthorns and less mastitis and better fertility,” he says. “The higher protein ratio is sometimes higher than the fat and we are paid more because of the high protein.”

The brothers are using Canadian and United States genetics and aiming for a medium-sized cow. Farming on a floodbank can have challenges with two or three flood episodes each year, when they get an hour warning of the Manawatu River rising to get their cows over the stopbank.

“Then the stocking rate spikes to five cows/ha on the rest of the farm while the water recedes.”

But the operation is run on a low stocking rate to compensate and cows producing an average of 316kg milksolids (MS)/head, mean 900kg MS/ha/year.

After the very wet winter the cow condition was looking good until the early summer heat kicked in and the feed quality started to decline just as the cows were hitting their peak.

“It hasn’t rained since October and the maize and turnips we planted haven’t really grown very well.”

James has been flatting in Palmerston North with some classmates and commutes to the farm each day.

Next year he plans to finish the last two papers for the degree and head into the dairy industry to build a career.

Now he has experienced life in NZ the crowds of Nanjing have lost their allure and he wants to stay here and use his new-found interest in soils and pastures and of course his skills with cows to get a job and get stuck into the industry.