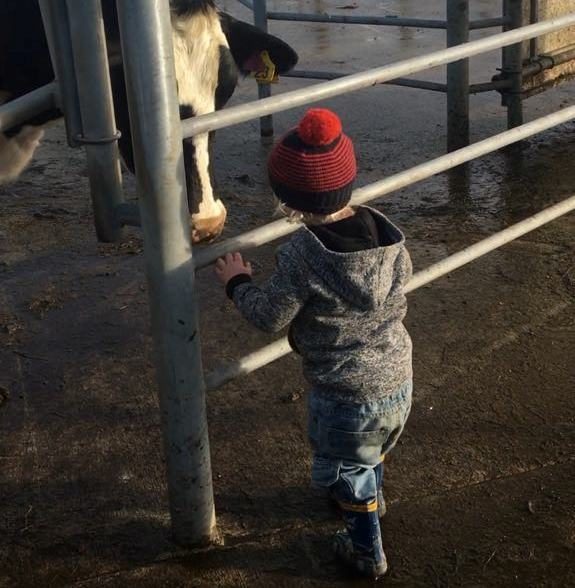 What will our youngest be doing onfarm in 10 years, Marty Orange asks from Feilding.

It has been reasonably dry here in the Manawatu, I not long ago had a fert truck driving around the farm but that was short-lived as I found out today when I got the side by side stuck.

The drier weather has meant I have been able to grow a lot more grass than this time last year, my cover is up 200kg on the same time last year. The last soil temperature I took was sitting around 9.8C which has meant that I have had a good result from the combination of applying ProGibb and nitrogen together post-grazing.

There are a lot of hot topics out there at the moment that could be discussed and perhaps one of the reasons that my soil temp is getting warmer is due to one topic in particular; global warming. Earth’s temperature has warmed by about one degree Celsius since humans started using coal, oil and other fossil fuels.

According to a soil scientist who recently spoke at a seminar I attended, global warming is a load of s**t.

Here in New Zealand, temperatures are about one degree hotter than they were a century ago. Now I am no expert, in fact I copy and pasted that last sentence from a new website www.farmingmatters. co.nz that has practical information, backed by science, to help farmers and growers get to grips with climate change.

According to a soil scientist who recently spoke at a seminar I attended, global warming is a load of s**t.

Load of s**t or not it is going to impact the way we farm. I’ve talked before about a shift in consumers and the way they perceive our products.

The move to alternative proteins, dairy-free, meat-free, are all decisions they are making because they see it as contributing to climate change. We already see farmers moving away from livestock and selling up for good money to farm carbon which appears to be one of the Government’s solutions to fighting the “problem”.

On the farm I manage we are about to plant three hectares of pines ourselves but this is less about carbon and more about stopping a hill from slipping away and retiring un-productive land.

I think one great thing about farmers and this climate change issue is that we haven’t buried our heads in the sand and we have been on the front foot.

I recall many years ago visiting an AgResearch or Massey farm where they were measuring methane from cows. It was like the real-life version of the old “easy daisy” Tui TV ad where they had these cows in big airtight rooms and collected the burps and farts. It was fascinating. Then there were the cows with holes in their sides, as kids we always talked about them but never actually saw them in real life. The story I heard was that you could see right through the cow. A quick Google finds that we have been spending $12 million annually over the last 10 years researching greenhouse gases from farming. Breeding, feeding, vaccines, all work has been carried out to reduce our impact.

It does leave me pondering what my youngest (the only one who seems interested) will be doing onfarm in 10 years’ time. According to one TV show host he should be looking at diversification and trading cows for cannabis. My hope is that he sticks to, in the words of Terry Copeland, “what we are successful at in New Zealand is pasture-based, grass-based farming”.