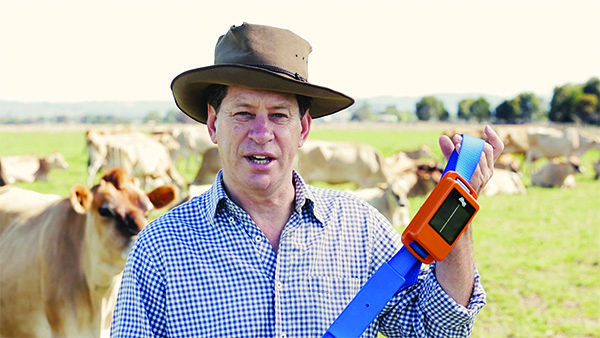 Virtual fencing looks to be cheaper and more effective than permanent fencing for keeping cattle out of waterways.

That’s the high-level conclusion of AgResearch trials investigating the suitability and potential for virtual fencing on a typical New Zealand hill sheep and beef system where cattle make up 25-30% of stock units farmed.

The finding is good news for farmers looking for cheaper ways to fence stock from waterways, but there are other add-on benefits from virtual fencing, AgResearch scientist David Stevens says.

“The upside is improved pasture utilisation and quality by being able to move and restrict cattle to certain areas of large hill blocks.”

Stevens is overseeing the second year of a trial at Waipori Station on the shores of Lake Mahinerangi in Otago. The project started in late 2018 following a visit earlier in the year to Agersens, an Australian company developing eShepherd, solar-powered GPS trackers for livestock.

A proof of concept trial of over summer 2018 looked at whether the Australian-developed technology would work in a typical NZ cattle system. As well as looking at whether the cattle could be tracked in rugged hill terrain the trial investigated how easily cattle adapted to the technology and whether they became stressed with the collar-based system.

For the trial a group of 50 Angus steers with non-active collars was contained in an electric fenced area, and another group of 50 with working collars contained within the same-sized area using virtual boundaries.

The cattle trained very quickly and once settled only needed audio cues rather than a minor pulse (which is about 20% the intensity of a boot from an electric fence) to deter them from overstepping the mark.

“They got the message very quickly and there was no evidence of stress. It proved that containment was close to 100%. We also found that the few times an animal did overstep the boundary it only took about 10 minutes to (virtually) herd them back to the group,” Stevens said.

The second trial started late last year, looked at the suitability of using the collars on cows with calves at foot. The collars, at 2kg each, can’t be used on livestock under 250kg liveweight (LW) so the experiment was to see if the cows become agitated and ‘broke’ the fence if their uncollared calf overstepped the virtual boundary.

The raw and yet to be analysed results are promising, Stevens says.

“There was less of a containment problem than with the R2s and no sign of agitation and stress of the cows if their calf wandered outside the boundary… the only failure we did have was with the electric fence used on the control mob.”

The next step is likely to be a large-scale grazing trial by Agersens in Queensland before commercial release of the collars.
The big question – the cost of the collars – is commercially sensitive at this stage, Stevens said.

The NZ distributor for eShepherd is Gallaghers.

How does it work?

A virtual fence is drawn on a device.

A base station is installed on the farm to relay the fence’s location to GPS-enabled collars worn by livestock.

The collars use patented CSIRO training technology to “shepherd” cattle to the desired location, largely by use of an audio cue. If the animal ignores the audio cue and continues towards the boundary, the collar delivers a mild electric pulse. It is a single pulse and not continual like a shock from an electric fence.

Livestock can be moved by changing the location of the fence assigned to their collar.

The life expectancy of an eShepherd collar is estimated at five-10 years.