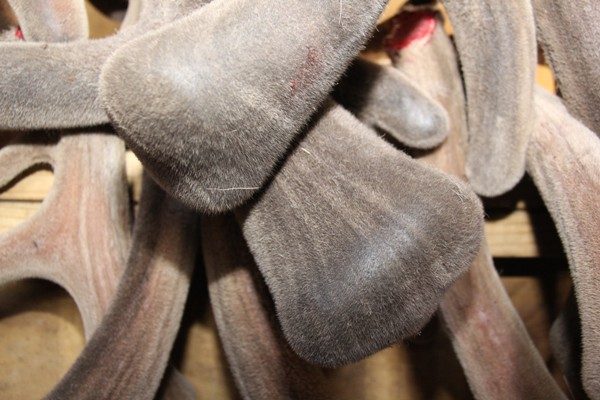 Depletion and regeneration of stag bone during velvet growth could help pave the way to an osteoporosis cure.

But unlocking the molecular biological mechanisms at work during the rapid velvet growth process could throw new light on the disease.

The growth process creates an insatiable demand for calcium and minerals which no amount of feeding will satisfy forcing the stag to draw on its calcium and mineral skeletal storehouse. The rapid depletion of these minerals causes weak, porous – osteoporotic – bones which in a 3-D X-ray have an almost honeycomb appearance. However, following hardening of the velvet rapid bone regeneration occurs over a few weeks.

“Deer and human bone are completely the same but when humans get osteoporosis it can’t be reversed,” Li says.

His goal is to understand the molecular mechanisms that lead to bone regeneration. He stops short of saying that such knowledge will lead to a cure, but says it could lead on to promising “biomedical developments”.

Li was a leading light in AgResearch’s former Invermay Velvet Antler Research Group, which from the mid-1980s until the mid-2000s was the leading force in velvet research.

‘Deer and human bone are completely the same but when humans get osteoporosis it can’t be reversed.’

The Invermay connection started with a Chinese government-funded scholarship awarded in 1990 to further pursue his research in deer antler. The young scientist wasted no time in contacting the Invermay group which at that time was regarded as the world centre for velvet research. The scholarship led to a 23-year research stint at Invermay during which Li made ground-breaking discoveries around the cells and tissues that initiate the growth and shape of antler.

Restructuring of Invermay led to break-up of the team and Chuny Li’s departure in 2013. New Zealand’s loss has been China’s gain with Li now leading the world’s largest velvet antler research facility at the State Key Lab for Molecular Biology of Special Economic Animals in Changchun, northeast China. The government-funded organisation employs 300 scientists working over 11 broad research divisions. Each division receives about NZ$550, 000 annually for up to four years.

“We choose the research direction, the only requirement is that we keep on with the project.”

The velvet antler division employs 30 scientists plus technicians who are working on a number of projects which includes the osteoporosis-focused research.

In Li’s view it is unfortunate NZ no longer has the velvet research capability to match the size of the farmed deer industry. However, he is forever grateful for the excellent early career experience at Invermay and still has family and professional connections in Otago. His son attends the University of Otago, and one of his graduate masters students is also at Otago completing a PhD with Dr Dawn Coates, a former Invermay antler researcher. Li is also taking steps to establish a joint antler research project with Deer Industry New Zealand.

“I am hoping that by doing so I may be able to re-establish some antler research capability in New Zealand.”