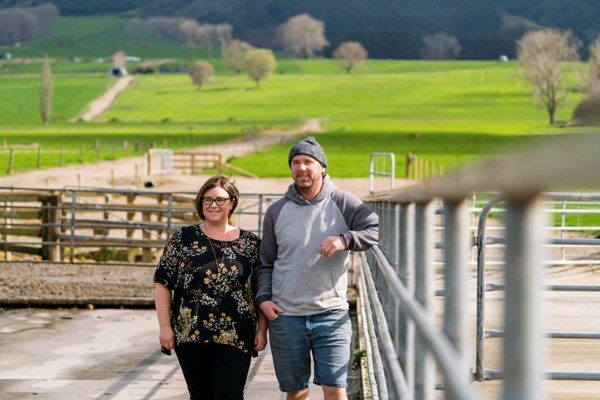 The Central Plateau Dairy Business of the Year is a Reporoa operation running at 3.3 cows/ha. Dairy farmers Robert and Hayley Hathaway have bumped up milk production with a higher stocking rate by using efficient supplements and precision pasture management. Sheryl Brown reports.

When Robert and Hayley bought their 160ha dairy farm on the Reporoa flats they were milking 460 cows at 2.8 cows/ha, producing 148,000kg milksolids (MS).

The move to a higher stocking rate wasn’t planned. It was the result of a favourable calving season when they had a lot of heifers born. They reared the extra replacements and eventually brought them into the herd, bumping their cow numbers up to 500.

With a higher stocking rate, they don’t make very much grass silage so utilising every blade of grass is essential, Robert says.

“You have to be on to it with your pasture management.”

They dry the cows off in May to ensure they have enough grass going into winter.

“It starts to get too wet and there is too much pasture damage, the girls need a break too.”

Earlier this year their tanker track was inaccessible from April when their creek flooded and took out their culvert, so the cows were all dried off earlier.

They graze 350 cows off-farm for eight weeks and the young stock go off-farm after spring at 150kg to graze at Rotorua.

Robert and his sister Louise Hathaway, a web and app designer, developed the Grazing Calculator App in 2013.

‘I try and measure the pasture a week ahead and like to know if I’m feeding out or adding in more supplement. I don’t like to change it too much.’

Robert’s idea was to create a simple app that would do quick grazing calculations based on various scenarios.

The app allows you to work out the number of days in a paddock, for pasture and crops, based on number of cows, kg DM you want to feed every day, target grazing residuals and square metres based on paddock size.

Robert has also invested in a drone to measure pasture, but is now trialling SPACE from LIC, which he says is saving a lot of time.

“SPACE is a bit up and down and it can’t always give us an accurate pasture cover for a particular paddock, but it ranks the paddocks well and we know where on the farm we have pasture.”

Robert adjusts the supplement the cows are getting in the farm dairy based on pasture cover and if it’s too wet to feed out silage.

“This is a wet farm and sometimes it’s too wet and there is too much mess and waste trying to feed out in the paddock. When it gets to that point where I’m not going into the paddocks with the wagon I can increase what they’re getting in the shed.

“I try and measure the pasture a week ahead and like to know if I’m feeding out or adding in more supplement. I don’t like to change it too much.”

When they increased cow numbers, Robert was initially feeding a lot of palm kernel. It was cheap and the ‘in’ feed. However, four years ago he started experimenting with other supplements and he immediately saw the cows responding better and an increase in production.

“Soya seems to work well, it might be more expensive (than palm kernel), but over the last two years we’ve seen better results.”

Milk production has increased to 252,539kg MS on the home milking platform and their feed costs in the farm dairy are $350/t. “Our feed costs have been higher over the last couple of years because it’s been so wet,” he says.

Robert predominately uses soya hull pellets, hominy (kibbled maize) and milk whey from Open Country Dairies. Soya hull makes up 70% of the dry feed, with 10% hominy, and the balance is made of palm kernel and minerals. The herd gets an average of 4kg/cow/day, but the top performers can get up to 6.5kg.

He also buys in 150t of grass silage and 150t of lucerne silage from Fiber Fresh, their next-door neighbours.

They have a dosatron for mineral dispensing, but Robert wants to buy a mineral dispenser for the farm dairy feed because it’s more accurate and he can ensure the cows are getting their daily requirements.

“In winter the cows just aren’t drinking enough water so they’re not getting enough minerals.”

In previous seasons they’ve grown up to 12ha of turnips in the summer, but Robert is not planning on growing any this year. He has done the figures and it works out cheaper to buy in equivalent feed over summer because it takes too long to get the paddocks back into the grazing rotation.

“Especially with the wet autumns we’ve been having, we haven’t been able to get on and graze the paddocks early enough.”

He is planning to go from grass to grass for their pasture renovation programme instead which means they can put the new grass in by February or March and be grazing it by early Autumn.

When it comes to pasture species, Robert is not fussy and uses Ceres 150 grass seed in the burgundy pack.

“My friends and farm adviser suggested it and I have had good results, it works the best on my farm.”

He uses Shogun to undersow the farm when needing to boost pasture in paddocks, often those that have been damaged in wet conditions. The season has started off more favourably and the couple are hoping the weather is kinder this year. They’ve had three extremely wet seasons in a row, Robert says.

The cows averaged 498kg MS/cow last season and Robert and Hayley are keen to nudge them over the 500kg MS/cow this year.

Robert feeds supplement to the cows on the home farm based on their production, age and weight. The technology in the rotary allows him to feed cows individually, which he would like to be able to do on both farms.

Robert has two full-time staff on the home farm, a manager on the lease farm, another full-time worker that floats between the two farms and a calf-rearer. 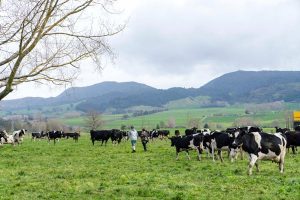 Robert grew up in Reporoa and met Hayley, who grew up in Oamaru, when he travelled to South Otago to study at Telford. The couple moved back to Reporoa in 2001 and have lived in the region ever since.

“Robert never warned me about the fog though,” Hayley says.

Robert worked for a year across his parents’ dairy farms in the area before taking on the role as manager on the 160ha farm.

The couple went contract milking the following year and bought the farm off Robert’s parents in 2009.

The couple have since had three children, Felix, 7, Willow, 4, and Remy, 2. Hayley, who has a NZ Diploma of Business, is chair of the Reporoa Primary board of trustees and vice president of the local Playcentre.

The couple work with Intelact consultant Daniel Sullivan, from AgVantage Consulting and have entered the Dairy Business of the Year (DBOY) awards several times, almost as a default, Hayley says.

Working with Intelact involves providing your financial and farm information, which you get a thorough annual report – which is used as your award entry.

Winning the Central Plateau Dairy Business of the Year has given the couple even more encouragement to focus on other areas of their business.

“Now we’ve aced milk production we need to look at all the other figures,” Hayley says.

“We are not big budgeting people on a monthly basis, and our cost per cow that year seems to be higher compared to the other finalists, so we need to look at that and work out why.

“We have learnt so much and are motivated to work on our return on capital, as that is 50% of the competition.”

The couple are continuously looking at other farming opportunities that can help them raise their equity portfolio.

“We are always looking at opportunities that come our way,” Hayley says.

Entering the awards and benchmarking yourselves against other farmers is huge motivation and sharing a day at the Leadership Optimisation seminar with the other winners after the awards was an awesome opportunity, the couple say.

“The knowledge we gained will really help us achieve our business goals,” Hayley says.

Robert’s Grazing Calculator App can be bought on iTunes for Apple and Google Play for Android phones.