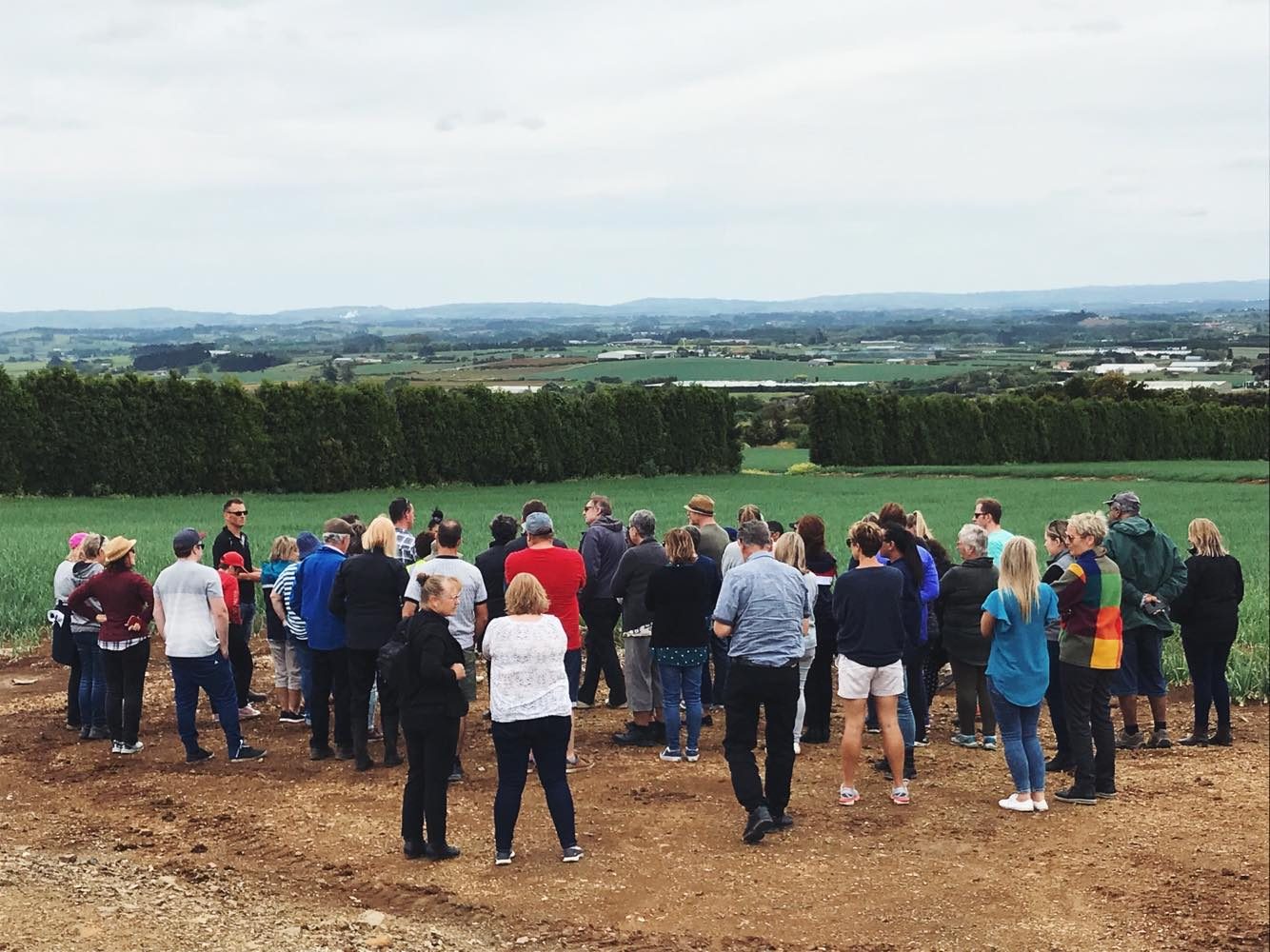 Urban teachers turned out in full force to learn more about the Primary Sector at the Auckland Teachers’ Day Out.

Held in Pukekohe on Tuesday, the tour visited an award winning sustainable dairy farm, a sheep milking farm, one of the country’s biggest vegetable growers and Norwood Machinery.

53 secondary school teachers took part in the event, coming from between Northland and south of the Waikato.

Te Awamutu College food and fabric technology teacher Pauline Smith says she wanted to learn where the food comes from that she teaches her students about.

“I wanted to see because of the jobs as well, especially for boys bouncing off the walls, we want to get them real jobs, tell them where to go and where there’s opportunities,” she says.

Being from the Waikato, she says she often only thinks of dairy farming as the closest opportunity in the primary sector and was unaware of just how big the industry is.

“Balle Brothers, that’s a massive industry that we know nothing about.”

“It was really cool to go and see that market gardening and all the massive food production.”

Smith says the visit was a good example of career opportunities that she can take back to the classroom with a message for her students.

“Open your mind, open your eyes, go and look what’s actually out there for work, don’t assume. When they say they want a gap year, why are you working in fast food, why don’t you go get a gap year working at Balle Brothers,” she says.

Balle Bros produces 60,000 tonnes of onions and 70,000 tonnes of potatoes for domestic supply and export, 362 days of the year as well kumara, cabbage and a number of other vegetables.

“The world’s population is growing and it will always want and need fresh fruit and vegetables,” Balle says.

The business needs workers from seeding and harvesting to tractor driving, engineers, mechanics and scientists.

They take on board unqualified people who are then trained through apprenticeships and put through qualifications and university degrees, all paid for by Balle Bros.

“The worlds crying out for food and we need people to meet that demand,” he says.

“They get to work the land outside, produce real food for real people in a sustainable manner and generate a really good income.”

Teachers got the opportunity to see the vegetables grown first hand, as well as parts of the manufacturing plant.

Many of the teachers also enjoyed the visit to Te Nihi Nihi Farming Trust and Te Papa Eco Cottage overlooking the Waikato River.

Sustainability champions, Stu and Kim Muir have won awards for their operation restoring wetlands of the Waikato River.

“We’ve opened up about 3km of this stream, brought it from a dead dying nothing back into a vibrant swampland,” Muir says.

There are now more fern birds, bitterns, crakes and rails in the Muir’s wetlands than anywhere else on the river after eight years of laying bait stations.

The farm has been in the family for seven generations. Now turned dairy, they are milking 500 cows using a winter feed pad and Electronic ID readers for each cow.

“The way labour is and the rest of it, the easier and more simple you make a system the better sort of people you’re going to contract,” he says.

“One of our Kaupapa is that we want young keen people, I don’t care if you’ve never milked a cow in your life but if you’re young, you’re keen and you want to learn we’ll teach you and then we’ll get you up through those next levels.”

Three teachers from ACG Strathallan College in Auckland were also lucky enough to pay a visit to a former student’s farm.

Selling milk to cheese makers, she also provides the milk free of charge to her community.

Having replanted most of the waterways on the farm from toxic weeds to native plants, she is a leader in the environmental space.

The teachers were able to ask questions around how the sheep are milked in the four bay shed, breeding practices, what they eat and more.

Alison Howie and Bronwyn Neville from Kaipara College says it was interesting to learn how to apply real life jobs into science lessons.

“I think people were really stressing the importance of having skills and resilience and forward thinking, where they can adapt to fit any role,” Alison says.

Bronwyn says it was interesting to see how technology has changed the industry and people will have to move with the times and evolve with the technology.

The day was also about creating contacts for teachers to connect with people in the industry and find out more about agribusiness.

“I’m the only one that does horticulture and I’m not from a horticulture background I’m science, and there’s no one really else around in our area doing anything like that, so it’s really good to come to things like this,” Bronwyn says.

Young Farmers CEO Lynda Coppersmith says it was great to give secondary school teachers an accurate view of what’s really going on in the sector.

“We want young people to have a clear view from the influencers in their life about what jobs are out there, so we’re targeting the teachers who excite and nurture their students.”

“It was great to see them gain that connection of what goes on from paddock to plate and what it really takes to produce food.”

Hawke’s Bay, Dunedin and Ashburton will also play host to a Teachers’ Day Out in the next week.