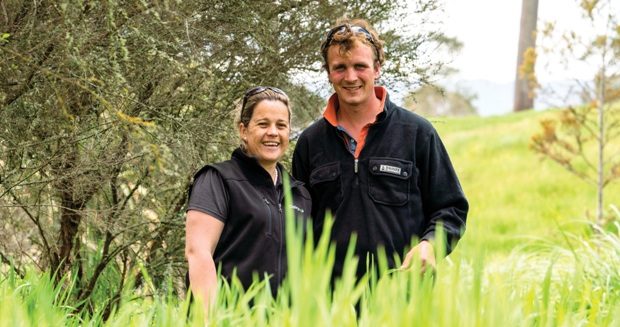 The next generation of farmers won’t have capital gains opportunities, so will have to focus on profit, a Waikato couple tell Sheryl Haitana.

One side effect of future environmental regulation is that it may open the door to the next generation to achieve farm ownership.

“For our generation, it felt like we were just about locked out five years ago,” Lizzy Moore says.

Turn the clock forward to 2020, and many ageing farm owners may want to get out of the industry with numerous farms on the market. The new regulation pressure could be the opportunity the younger generation need to get their foot in the door. Whether it is farmers leaving some capital in or leasing out their farms and handing over the reins.

For young people there are so many opportunities amongst the environmental challenges that lay ahead. New Zealand farmers have always faced challenges and they usually find a way to adapt, Lizzy says.

‘All our metrics are based on production, but it’s the profit per hectare that drops out the bottom that’s key.’

“Farming is never easy. My parents had 23% interest rates when they bought this farm. “There have always been things coming at farmers.”

Her husband Ben, who hails from Hampshire in the south of England, agrees NZ dairy farming is still a great story and has a great future worth investing in.

Future farmers will buy a block of land, they may have to invest in further environmental standards, and farm it differently to meet incoming regulation.

The next generation of farm owners likely won’t see the capital gain their predecessors enjoyed, and their costs may continue to rise, so they will need to focus more on profit and they will need a better premium, he says.

Lizzy works for DairyNZ as a consulting officer for Hamilton and Cambridge and Ben has followed in his father-in-law’s footsteps as a Federated Farmers representative so spends at least one day a week off farm.

Ben has been a Waikato representative for Federated Farmers and this is his first year on the national executive.

“I really enjoy it, what I really like is helping farmers directly, who are asking for help.”

A frustration point for Ben and Lizzy they see through their industry roles is many dairy farmers don’t really know their numbers when it comes to farm working expenses and their profit margin. They are often flying blind.

“All our metrics are based on production, but it’s the profit per hectare that drops out the bottom that’s key,” Lizzy says.

More farmers should be on Dairybase to benchmark themselves and be doing regular cash flow budgets, she says.

Lizzy and Ben currently own a 45ha block and lease 100ha off Lizzy’s parents, Tony and Sally Wilding, near Tirau in the Waikato.

Tony and Sally had already done significant planting and fencing on their block over the years which Ben and Lizzy have continued.

They built a feed pad last year to reduce their reliance on bought-in feed and are now chipping away at further environmental improvements.

They completed a Fonterra Farm Environment Plan Tiaki in 2018 which highlighted some key projects on the farm.

Tiaki is one of the fantastic resources farmers can tap into to get guidance on environmental and best farm practice, Ben says.

Ben invited Waikato Regional Council (WRC) catchment management officer Warren Coffey out to the farm to put an action plan in place – another contact farmers can use.

The regional councils can be tainted for their regulatory role in compliance, but they are a wealth of free knowledge and advice particularly when it comes to handling waterways.

“Warren came around and we spent half a day onfarm coming up with a plan, and he had heaps of advice. He was on the phone over the next couple of weeks and the river works team organised a couple of workers with chainsaws for me to clear some willows.

“It’s great when council is working with you instead of against you.”

Every site is different and can require a different fencing and planting plan. It’s horses for courses, with many variables into slope, soil type, location, etc, Warren says.

There are great tools around that farmers can use if they want to do it themselves, such as the DairyNZ riparian wheel and EnviroWalk App.

Regional council staff are on hand to give farmers some extra reassurance they are on the right path.

“The beauty of getting us out is we can give them extra advice, we might see a wetland that’s a critical source point you hadn’t considered,” Warren says.

Councils can also help with funding, consents, labour, and contacts for plants at a more competitive price for farmers.

The first project for Ben and Lizzy was a stream on the farm’s boundary, which was overgrown by willow trees and had become quite stagnant. Lizzy remembers riding old plastic water troughs down the stream as a kid.

Lizzy and Ben have two children, Henry, 4, and Arabella, 3, and the couple are keen to ensure they get a similar childhood onfarm.

“We had an amazing upbringing on this farm. We’ve made it kid friendly for us and our staff.”

The regional council supplied Ben with a consent to use a digger to clear the willows along with a week of labour from two workers with chainsaws.

Councils are trying to handle willow trees differently, leaving some that don’t need to be cut, cutting some and poisoning stumps, taking some stumps completely out. Planting and erosion control is also a key part of the process, Warren says.

The regional council typically shares the cost 50/50 with farmers on physical works when clearing willows that are blocking a stream, although this funding arrangement differs in various catchments, and the farmer contribution may be by way of in-kind work. The council may also provide 35% funding toward fencing and plant costs.

Ben and Lizzy can only afford to do the clearing and 11km of new fencing this year. They will let grass grow back behind the fence and look to do more riparian planting in the next couple of years.

“We’ve got about 4ha of planting to do, we’ve just built our feed pad, so we will chip away at it.”

Waikato Regional Council can also help facilitate working groups and sub-catchment groups for farmers to work together and engage with the local community, Warren says.

“We can help facilitate a meeting, assist with catering and provide resources. We prefer to work like that,” Warren says.

It can be easier to secure more funding and achieve a greater result when farmers in a sub-catchment work together. For example, if you get the local school involved, not only is it great to get kids onfarm, but there can be education funding, or iwi funding available on certain projects.

“You can apply for external funding, that’s the benefit of a catchment group.”

There are eight Fonterra Sustainable Catchment Programmes in the Waikato region which are perfect examples of what collaboration can achieve.

“You can get more bang for your buck. That initiative from Fonterra has been really positive. We are matching that dollar for dollar,” he says.

Part of that initiative is Fonterra completely Tiaki Farm Environment Plans on all farms in those sensitive catchments.

Building a feed pad last year was a significant investment toward being more self-efficient. Ben and Lizzy want to have less reliance on bought-in feed. They currently grow 20ha of maize, 10ha on the milking platform and 10ha on their runoff.

The 450-cow feed pad is also a great tool to capture nutrients which they can irrigate over a 65ha area. They installed Halo and a flood wash system as well.

They are using the most efficient cropping methods, using a strip till that does everything in one pass.

“The machine strip tills only where the row of maize is going to go. It has GPS so next year it can till the same line, or another line slightly to the side, so we are looking after the soils better and it’s cheaper.

“It rips, plants and fertilises and puts bait down all in one pass.”

When it comes to keeping up with new government regulation and best practice on farm education is a priority.

Farmers need to go to more industry meetings and engage with their farming and urban community more, Ben says.

“You’ve got to stay ahead of the game.”

It is important farmers don’t make excuses going forward, but they can’t be pushovers either, he says.

Ben and Lizzy are keen to lease another dairy farm or start buying into the family block in the next few years.

They are open to opportunities which might not mean buying the family farm, but their job at the moment is to look after the land for whichever next generation takes it over, Lizzy says.

“We are only here for a short time, we don’t own the land. Our name is just on the title.”