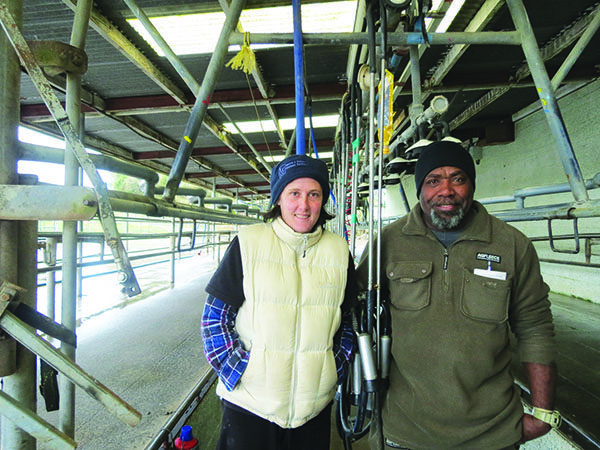 Knowledge transfer on farms can now be facilitated through the use of technology for daily tasks as well as documenting important farm history. Sheryl Brown visited the Flavalls at Tokoroa on a snowy day in July to hear how they are using FarmIQ as a key part of their operation.

Technology is making it easier for beginners in the dairy industry to access information and be able to make accurate decisions to run a successful operation.

Newbie Sarah Flavall and Douglas Nicholson came home to Sarah’s family farm in Tokoroa three years ago with no experience working in the industry.

The couple have since taken on the 294-cow sharemilking job this season and they’ve invested in FarmIQ because they wanted a programme they could rely on to back up their onfarm decisions while they’re still learning.

“Because we are relatively new to the industry, we wanted to surround ourselves with experienced people and tools that make our day-to-day work easier,” Sarah says.

“That’s why this app works so well. It gives us the back-up support so we can make better decisions.

“It’s great for capturing farm information and there’s a lot of good reporting.”

Sarah has a background working as a safety, environment and quality manager and now works four days a week as a project manager for South Waikato District Council.

As they were preparing for their own sharemilking business Sarah started researching farming programmes and apps to suit their operation.

“In my experience I knew there are a lot of apps and computer programmes out there, but they’re often not integrated – you end up doing just as much work because you’re entering lots of data in different places.

“It’s easy to create a programme or an app – but it often becomes an orphan because it doesn’t integrate with other programmes.”

FarmIQ appealed to her because of its ability to work in with other programmes such as Cashmanager Rural, Farmax, Tru-Test, Gallagher and NAIT. Because it’s part-funded by Ministry for Primary Industries and used by Landcorp it also had a good future, Sarah thought.

“I looked at the system and thought there was good funding behind it so there is likely going to be longevity.”

It’s a good idea to use programmes that have adequate resources with a decent backup service and the funds to progress and continually improve, Sarah says.

Sarah and Doug met in Vanuatu when Sarah worked as part of Volunteer Service Abroad for three years. In her fourth and final year she worked for the Downer Group.

The couple later moved to Western Australia where Sarah worked as a quality manager for Downer Mouchel.

Moving to Australia they slowly adjusted to a faster pace of life than island time before they decided to move to New Zealand to take up the mantle of running the Flavall family farm.

The farm has been in the Flavall family since Sarah’s grandfather bought it in 1922. Sarah’s father Farquhar Flavall retired from milking cows more than 25 years ago, and the farm has operated under 50:50 sharemilking contracts since.

When the sharemilker decided to move on after 13 years on the property, the question was raised of what would happen to the farm.

Sarah saw it as an opportunity for Doug and her to take charge of their own destiny and maintain the farm legacy.

“It was an opportunity for my kids and my sisters’ kids to keep the farm in the family, and I had a willing partner to do it with,” she says.

Farquhar hired another sharemilker for three years with the condition he employed Doug and Sarah throughout the three-year contract.

Doug got his feet wet working as a farm assistant while also studying PrimaryITO Dairy Farming Level 3 and 4 while Sarah worked at the council and helped part-time on the farm.

The FarmIQ programme and phone app has not only helped Doug and
Sarah adjust to making onfarm decisions for themselves it’s also helping them meet their obligations as an employer in their first season sharemilking, Sarah says.

Staff records and meeting employment legislation obligations is made easy with staff filling out their time sheets on the phone app.

Sarah and Doug can monitor their hours in real time and can adjust the roster if necessary. It also means they’re not waiting or looking for dirty timesheets to come in at the end of every week and having to record the information twice.

They have a staff meeting every Sunday evening and can assign tasks to employees through the app which can be ticked off when the job is done.

They can set reminders in the calendar for regular jobs that need doing such as cleaning out the sediment trap weekly or doing vehicle maintenance. It means the tasks don’t just fall off the radar, Sarah says.

For health and safety recording any staff member can simply sign in visitors and contractors on their phone and even take a photo of them if necessary.

Staff also have the hazard map at hand on their phone and can record any new hazards or incidents directly on the app.

It’s an easy tool for any staff member to get used to and use, she says.

“When I left for Vanuatu I had an iPod – in that four years technology just seemed to take off. I wouldn’t call myself tech-savvy.

“And English is Doug’s 11th language – but the app is easy to understand and it’s easy to communicate with staff. It shows you how easy phones and apps are to use.”

Because Sarah works four days a week the programme also gives her the ability to keep track of what’s happening onfarm while she is away.

The FarmIQ mapping tool has multiple benefits including making it simple to record farm pasture cover.

Doug does his farm pasture walk with his phone and records pasture cover directly into the app. When he finishes the farm walk he has the data instantly available to make decisions on grazing rotations.

The map programme also makes it easy to work out how to divide a paddock into break fencing and work out how much supplement to feed out.

“In FarmIQ you can draw an interior fence line and it gives you the exact area of the breaks and the pasture cover.

“People with experience just have to look at a paddock of grass and know how to break it up and what supplement is needed. But when it’s an awkwardly shaped paddock, it’s great to have this tool especially while we are learning.”

A heat map shows the best and worst-performing paddocks for grass growth over time and Sarah is looking forward to having a year’s worth of data to make decisions on pasture renewal going forward.

“There is a heap of capacity in here I haven’t even investigated yet. It’s as complex as you want it to be.”

The map feature also gives them the ability to draw in and record effluent irrigation runs and fertiliser applications which then makes the data easily accessible for a nutrient budget.

“Putting fertiliser on the farm the other day, I just had to click on the paddocks I wanted done, it gave me an area amount and a map which I could send through to the fertiliser company.”

Having that information so readily at hand and knowing which paddocks respond best to fertiliser is going to become even more important with the Healthy Rivers Plan Change coming in, she says.

FarmIQ also offers the opportunity to attach historical farm information to each paddock. Being able to collate historical information easily is all part of the succession plan, Sarah says.

The map feature allows Sarah to mark existing and former water lines, taps, or hazards, and write up any important characteristics of each paddock.

Sarah’s mission since returning to the family farm has been to extract her father’s knowledge about the history of the property in order to retain knowledge and maintain the legacy of Flavall Farm.

“The story of us coming back to the farm – it’s not just coming back to work here, it’s about the history of the place and continuing the legacy of previous generations.”

This is awe inspiring. So happy that you guys are doing this. We are ex share milkers on the Flavall trust property from the 70s.
Chrystene and Bill