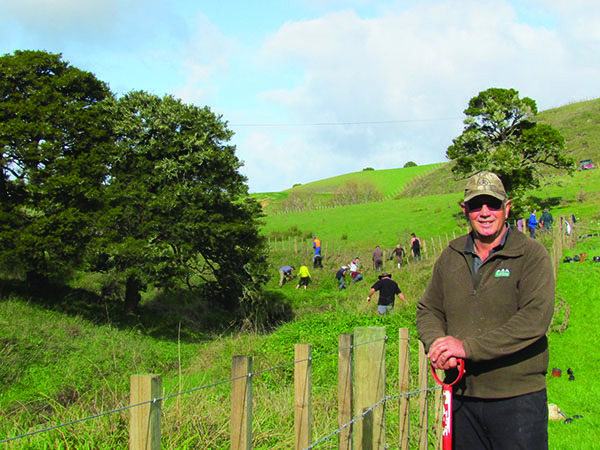 “But farmers have always had a level of environmental understanding,” he said.

“There’s good science available and now they’re reacting to that.”

He joined about 25 lower Northland farmers and Maungatoroto locals for a planting day organised by the Otamatea HarbourCare Society in early June, taking the chance to hear their views as well as make his personal contribution to improving water quality in the Kaipara Harbour.

Farming on high-producing, flat land at Ruawai, further north, he said he didn’t have the opportunity to make similar environmental improvements at home.

“But there is a lot of land like this which farmers would retire anyway,” he said.

“There’s no loss to the farmer but a gain to the environment. And when these plants are a metre high they will tell the story of what farmers are doing for themselves.”

There were always some farmers who would let the rest of their counterparts down but he was pleased to see in his new role that there were more farmers “dobbing in” other farmers when they saw them not doing the right thing environmentally. That would not have happened five or 10 years ago, he said.

While his council was cash-strapped it supported local initiatives like that being carried out by Otamatea  HarbourCare even if it couldn’t do so financially.

In the meantime Kaipara Council, which only came out of control by a commissioner nine months ago, was doing a lot of work planting its own land, such as 500 hectares around the Kai Iwi Lakes, north of Dargaville, with local support. It was all taking a Northland approach, backing water policies driven by Northland Regional Council.

Gent said the area had little intensive dairying and was still producing a similar amount of milksolids to that of several decades ago. This meant there were no increased levels of nitrates coming through its soils.

“Old dairying areas don’t have the problems that there are in the newer areas,” he said.

But topography meant there were spraying issues when it came to keeping noxious weeds under control.

Ashley Cullen, chairman of Otamatea HarbourCare since it was formed three years ago, also took part in the planting day, it’s first for the year. He farms nearby, milking 200 cows on a 142ha dairy platform. The aim, he said, was to plant 15,000 seedlings a year made up of flaxes, manuka, cabbage trees, karakas and koromikos, depending on the site. And he’s quick to praise the society’s secretary, Mark Vincent, who runs a nursery supplying plants as well as communicating the group’s vision of “A healthy harbour alongside productive land”.

Mark also sources funding for both growing the native plants and getting them planting out. He owns a small block in the area, and had worked for the previous Kaipara Council in regulatory management and then in policy and planning. In that role he’d been the council representative on the Integrated Kaipara Harbour Management Group (IKHMG) which has a series of flagship sites throughout its catchment where farmers can see practical results of environmental improvement decisions for themselves.

A visit from Fred Lichtwark, manager of the Whaingaroa Harbour Care group at Raglan to talk to Otamatea High School environment group got him thinking about a similar initiative. Since 1995 the Whaingaroa group has grown and planted 1.2 million native trees along streams and harbour edges to stop sediment run-off from land and improve water quality. Its members have also undertaken restoration planting on Mount Pirongia and around several Waikato lakes such as Lake Ohinewai.

But Mark’s first attempt to get a similar initiative underway further north saw an informal group disperse because those who wanted to be involved found themselves not able to give the time commitment required.

While a LandCare group had been formed there were also a lot of other entities in the same space, all pursuing their own objectives.

Then Mark was made redundant and decided the time was right to put his dream into practice.

“We used to grow sandersonia so we had a polyhouse which had fallen into disuse,” he said.

“But there was flat land, metal laid down and irrigation set up.” 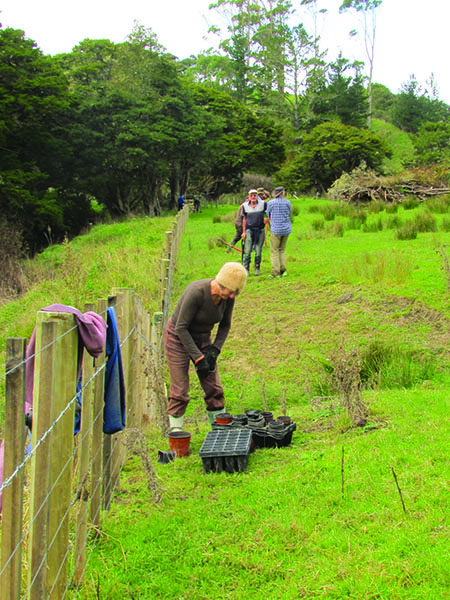 In the first season in which Otamatea HarbourCare was established as an incorporated society he grew 300 manuka seedlings there for planting out as well as the group being given another 1700 plants by Reconnecting Northland. It’s the first large-scale ecological restoration programme in the country which focuses on the wellbeing of both people and land. The collaboration between the World Wildlife Fund and LandCare Trust is funded by the Tindall Foundation, Foundation North and the HBSC Water Programme. It not only supplies seedlings but also the labour to plant them out on farms.

There’s also been valuable planting help for Otamatea HarbourCare from Fonterra staff working at both its Maungatoroto and Kauri manufacturing sites.

He also got busy networking, setting up a Facebook page for Otamatea HarbourCare and calling for volunteers. A number of retired people living in and around Maungatoroto were put to work helping out in his nursery as well as at planting days. And farmers came on board too, either offering their help to plant out seedlings on other properties, or earmarking an area on their farm which they fenced ready for planting to enhance water quality.

The next year Mark matched the 5000 seedlings contributed by Reconnecting  Northland with a similar number from his own nursery. The range was extended from manuka to other pioneer species such as flaxes, cabbage trees, karaka, koromiko and karamu, which were planted out according to site suitability.

And then he came up with a novel idea to attract more willing hands along to planting days. Comedian Te Radar was recruited to take part in a planting day on local farmer Les Kenworthy-Thompson’s property, which drew helpers down from the Far North as well as from further south.

“A lot of town people came along,” Les said.

Les milks 550 spring-calving and 200 autumn-calving cows and was the first supplier of milk to the Organic Dairy Hub Co-operative of New Zealand. He also rears 630 beef steers and bulls annually and has a 40ha forestry block.

Another local dairy farmer, Don McKay, has attended a number of the planting days as well as having seedlings put in on his farm by Otamatea HarbourCare members. He said most farmers agree environmental moves to enhance water quality is a sensible thing to do.

“We’re all caretakers of the land and we’re doing our best to improve it,” he said.

“We’re conscious of our responsibility. We’ve fenced off waterways on the farm that we don’t have to.”

He milks 400 cows after buying the dairy unit adjoining his 800ha sheep and beef property.

“On the farm you’re busy and you’ve got things to do and it’s a case of getting round to it,” he said.

“But having volunteers to do the planting is a huge benefit. We value our waterways and we’ve got to keep chipping away at it. The media is quick to tell the bad stories but no one talks about urban pollution. And the stick that’s pointed at it is often devoid of science.”

The idea of having a celebrity guest along worked so well that Mark lined up another, radio and television host, Paul Henry, for last year’s planting day.

“He has a place in the area so people came along to meet him,” he said.

“But there may have been others who stayed away.”

Mark now runs an extensive informal network with 196 recipients on his Otamatea HarbourCare email list. He sends out around a dozen updates every year, letting people know about upcoming events as well as commenting on environmental issues aired in television programmes or regional council initiatives.

“We’ve still got some way to go between the talk and the do,” he said.

“But new people are coming to the area all the time. We’re helping to build the legend, the New Zealand story which will help market our primary products on the world stage.”

These are the principles Otamatea HarbourCare follows:

Otamatea HarbourCare planted more than 16,000 trees at 13 sites last year, with over 9000 of the seedlings grown in the society’s own nursery, chairman Ashley Cullen said in his annual report.

But as yet there was no reliable way to measure the length of total waterways planted.

The target this year is to plant 30,000 in more than 800 volunteer hours, the same number as last year, over five community planting days.

Overall it was on track with its business plan, which aims to retain its local nature, develop partnerships, promote its work and target project-focussed external funding.

The society received an estimated $12,600 from Reconnecting Northland, made up of trees, labour to plant them, a $3500 fencing contribution and a mileage and administration allowance. The contribution of Living Waters, the Fonterra and Department of Conservation partnership, was roughly equal, paying nursery expenses to propagate 10,000 trees and the contract labour to help plant them. Local garage, Noel Radd Motors, chipped in with $500 of fuel cards for nursery volunteers.