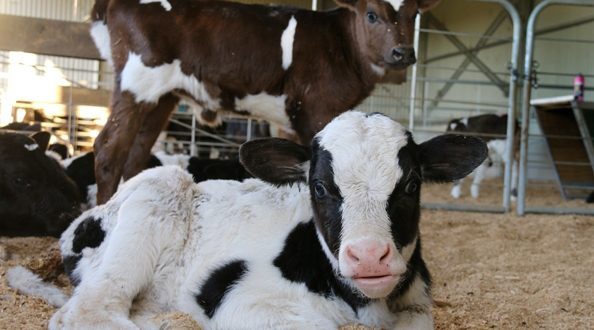 Young ruminants are functionally monogastrics for about two to three weeks post-birth. A ruminant’s stomach has four parts: a reticulum, rumen, omasum and abomasum. All four parts are present at birth but only the abomasum is fully developed and functional. Their rumen is small, sterile and underdeveloped at birth. This all needs to change in order for calves to go on to be grass-eating milk-making adults.

Dr Sarah Pain, senior lecturer at Massey University says that when a calf is born it needs to be fed milk in sufficient quantities to meet its nutritional requirements during this early life period because, until the rumen is adequately developed, milk (or milk replacer) is what the calf is physiologically set up to digest and utilise.

The calf’s digestive system has a mechanism which allows milk to by-pass the rumen and go straight into the abomasum (acidic stomach).

“Sucking and the presence of milk proteins triggers a reflex closure of the muscular folds of the oesophageal groove allowing milk to go through to the abomasum (the gastric stomach), by-passing the rumen all together.”

“This allows the milk to be digested more efficiently and therefore optimises the utilisation of the energy provided in the milk.”

The initial drink of first-milking colostrum is the key to optimising the health and immune function of the calf. Ideally the calf should drink about two litres of colostrum within the first six hours of life.

“They need it that early because the wall of the gastro-intestinal tract (GIT) is not completely closed off until the calf is about 24 hours old and it is at its most permeable in the first six hours.”

The immunoglobulins (antibodies) in colostrum transfer through the wall of the gut intact so it’s important to maximise intake of colostrum when the GIT is at its most permeable.

“Calves really need to be fed first-milking colostrum in the first six hours after birth, or at least within 12 to 24 hours, if you want to maximise the immune defence from colostrum.”

‘Milk won’t stimulate the development of the rumen. It’s the combination of both concentrate meal or grain and roughage or pasture in the calf’s diet that will.

A ruminant needs to have a developed and functioning rumen in order to change from a diet of liquid milk to that of solid feeds. A number of things are needed for a rumen to properly develop. It needs to increase in size and volume. When a calf is born its stomachs account for about 20% of the total gastro-intestinal tract volume, while in an adult ruminant, the stomachs account for about 50%.There needs to be an increase in the musculature to allow the rumen to contract. An efficient absorptive surface needs to develop which involves growing papillae and of course, the rumen needs to accumulate a microbial population in a water-based environment.

“Milk won’t stimulate the development of the rumen. It’s the combination of both concentrate meal or grain and roughage or pasture in the calf’s diet that will,” Pain says.

Concentrates and roughage stimulate different aspects of rumen development so offering both to your calves is important. The fermentation of concentrates in the rumen create lots of volatile fatty acids (VFAs) which are responsible for developing the inside surface of the rumen, they stimulate the development and growth of papillae. Papillae are finger-like projections on the inside surface of the rumen that create more surface area for absorption of digestion end-products.

Roughage, on the other hand, won’t really stimulate growth of papillae but is important for increasing rumen volume and musculature as well as stimulating saliva production. The presence of roughage in the rumen also creates an abrasiveness that improves papillae integrity and stops them clumping together which would decrease the efficiency of nutrient absorption from the rumen.

“Feeding roughage alone you won’t see the papillae growth, you need the grains/concentrates for that. It’s a beautifully co-ordinated system really in terms of its physiology with multiple aspects working together.”

However, you should not expect concentrates and roughage to start contributing significantly to dietary requirements before about three to four weeks of age. Calves are not able to eat or digest sufficient amounts of solid feed at this early age to meet their nutritional requirements. Milk needs to be fed in sufficient quantities to meet the calf’s total nutritional requirements for at least the first three to four weeks of life.

“You can allow calves access to roughage and concentrate from one week of age or even earlier. The small amounts consumed as they experiment with the feeds will start stimulating rumen development but they still won’t be able to consume enough solid feed until about six weeks of age to depend solely on it.”

The solid feeds offered to calves need to be high quality, ideally fed fresh every day and kept clean and dry. Free access to clean water is also important to establish the fluid environment in the rumen.

The degree of rumen development of individual calves fed milk, meal/grain, and hay or pasture will vary from calf to calf depending on how much of these feeds each calf eats. Pain says it’s important to spend some time with your calves when they are fed to keep an eye on how much of each feed calves are eating (or not eating) to give an indication as to when best to start reducing milk.

Making sure a calf’s rumen is developed in time for weaning on to pasture is important to avoid any setbacks in meeting growth milestones. Offering concentrate meal for one to two weeks after turn-out to pasture may help.

“If you remove milk from the calf’s diet before the rumen has adequately developed you will see reductions in growth.

“If the rumen isn’t properly developed at weaning they won’t be able to effectively digest and utilise sufficient quantities of pasture and there will likely be a lag in growth while rumen development catches up.”

When a calf drinks milk it bypasses the rumen and it is directed into the abomasum (the acidic stomach) through the reflex closure of the oesophageal-reticular groove.

The groove is at the lower end of the oesophagus and extends to the reticulo-omasal orifice. It consists of muscular folds that come together to form a tube-like structure that allows milk to be channelled into the calf’s abomasum.

“When milk enters the abomasum it is essentially curdled by the acid and enzymes in the stomach. The milk protein and fat form a solid clot, while the liquid whey, lactose and other milk components leave the abomasum and move into the small intestine where they are digested,” Pain says.

‘Ultimately consistency in your milk feeding routine is the key. What we want is for the nutrients in milk to be used for growth, rather than being used by gastro-intestinal bacteria leading to digestive upsets and scours.’

Enzymes in the stomach will then slowly break down the milk clot and gradually release the nutrients into the small intestine where they will either be further digested or absorbed.

Optimising milk feeding in calves involves maximising the efficiency of both groove closure and clot formation.

If the groove fails to close, either partially or entirely, milk will leak into the rumen where, rather than clotting, it is rapidly fermented. This can lead to ruminal acidosis and bloat, impairs the development and function of the rumen, and of course, results in poor calf growth and health.

If the milk in the abomasum doesn’t clot properly whole milk can enter the small intestine where it will provide substrates for bacterial growth leading to nutritional scours.

When too much milk is fed or when calves drink milk too fast, the large quantities of milk rapidly entering the abomasum do not clot efficiently and this can lead to bacterial growth and fermentation occurring in the abomasum resulting in abomasal bloat.

“There are a number of things that you can do to facilitate groove closure and milk clot formation,” Pain says

Feeding milk through a teat will allow calves to suckle which helps to stimulate groove closure. The teat should be positioned below the level of the calf’s eyes and care should be taken to ensure teats are kept in good condition.

“You can feed calves milk directly out of a bucket as well, but it’s best to have the bucket raised about 30cm above the floor the calf is standing on.”

Groove closure can be reinforced by routine and environmental conditioning. Allowing calves to see and hear their milk being prepared, and things like feeding milk at the same time of day and at the same (warm) temperature, will all encourage good groove closure. Having a comfortable housing environment and a consistent milk feeding routine will help to reduce stress. Stress responses inhibit groove closure.

You want to make sure to remove any leftover milk so that it doesn’t get consumed cold and avoid letting a calf drink too much milk or drink milk too fast, Pain says. Also avoid letting the calf drink lots of water right after feeding milk as the groove is still formed and water in the abomasum will weaken the milk clot.

“Ultimately consistency in your milk feeding routine is the key. What we want is for the nutrients in milk to be used for growth, rather than being used by gastro-intestinal bacteria leading to digestive upsets and scours.”