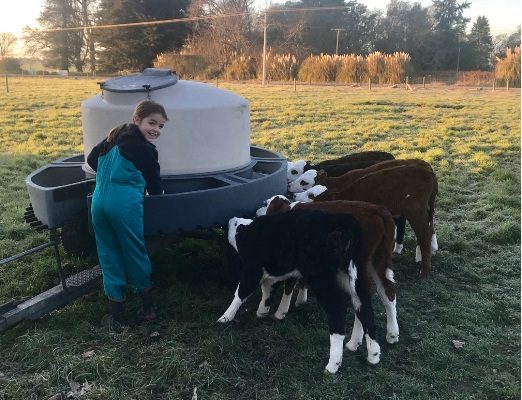 With a slight slowdown over winter, Frances Coles
has been hard at work writing submissions and
petitions.

Like everyone else around the country, we are back into the full swing of another dairy season. Calves are hitting the ground thick and fast; milk pick-ups are well underway and tractor work is starting to ramp up with winter crop paddocks to be restored to pasture.

Winter seems to have gone in the blink of an eye – and while we didn’t get away for a family break due to Aaron and the girls’ sporting commitments – the slower pace of farm work for a couple of months was still appreciated.

It has in fact, been a mostly mild winter here in South Canterbury. Many of the earlier winter storms and snowfalls seem to have skirted around us, but we’ve more than made up for it with plenty of rainfall and some very hard frosts of late, so we’re looking forward to some longer days and more sun soon.

While the team on farm take care of the animals and grass, I’m busy in the office sharpening my pencil for what seems to be my new side-hustle of writing submissions to ensure the rural perspective is considered in a range of situations.

Recently I launched a petition to ensure continued access for rural students to our local high school, which is being forced by the Ministry of Education to put in place an enrollment zone – but that’s a story for another column.

Right now my most pressing piece of prose to write (apart from this of course) is making a submission on Environment Canterbury’s Plan Change 7 proposal.

Never before have I seen such a concentrated and co-ordinated bombing of my inbox than the one I’ve experienced over the past fortnight by DairyNZ (and other industry groups), Federated Farmers, local irrigation schemes, and even our local Chamber of Commerce.

Rightly so, they have all been stressing to farmers like ourselves who run businesses within the Orari/Temuka/ Opihi/Pareora (OTOP) Zone the importance of having our say on what are some far-reaching proposals put forward by the regional council.

The cynic in me would make a comment about the timing of the release of the proposal and short time frame for submissions to be made (because it’s completely realistic to expect farmers who are busy calving/lambing/cropping to read a 700-plus page document and make a considered written response in a matter of a few short weeks – isn’t it?)

In short, there are a number of changes being proposed to Ecan’s Land and Water Regional Plan, including new nutrient reduction targets, reduced groundwater allocation limits, increased low-flow limits in some rivers, and new provisions for commercial vegetable growing operations.

We have a number of farms within the OTOP zone, and each will face different challenges under these proposals.

Our home farm will possibly fare the best, but it still has risks associated with its irrigation allocations and renewing consents in the future.

One of our equity partnership farms is located within a High Nitrate Zone, where farmers will have targets imposed on them for reducing N losses in two stages over the next 10-15 years. I’ve yet to get my head around how this will relate to our property when we already have a low stocking rate and therefore N losses that are considerably lower than the area average and our baseline figure.

Another equity partnership farm fares better in the water allocation and N loss stakes, but is a shareholder in an irrigation scheme which it appears is about to have the carpet ripped out from under them in terms of changes to flow and allocation rules, so we’ll get caught in the crossfire there.

I think what frustrates me the most about this situation is the regional council’s two-step approach around low flow limits and N-loss management. It sends a signal that the considered and thorough work done by local catchment groups over the past 18 months or more to come up with proposals all parties could agree on to meet the required outcomes is going to fail.

If groups of farmers, irrigation scheme operators, district councils, fishermen and environmentalists can work together to come up with a plan they can all agree should lead to the desired outcomes, couldn’t the regional council show some faith by giving it a chance before coming in with a big stick? I know I’d certainly prefer an education and encouragement approach rather than a regulatory one…