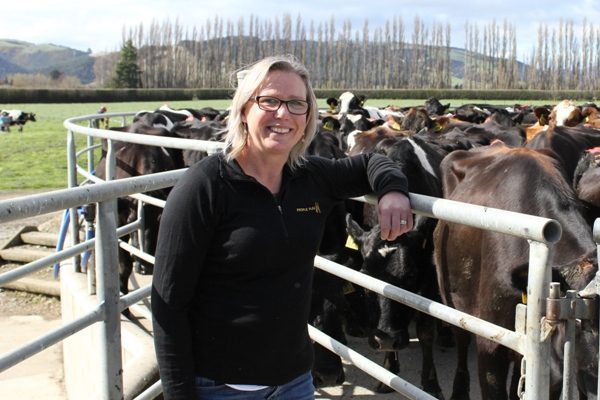 Although lean management on the farm might be a shadow board for tools, in the office it is definitely not a tidy desk.

People MAD business systems consultant Anne-Marie Wells said a tidy office was not what lean management in the office was about – her own desk on the dairy farm at Outram in Otago was usually far from tidy.

“It’s about having a tidy office system. That you know where everything is, you feel in control and you are not waking up at 2am wondering if you paid the GST and not just filed it with IRD.

“If you have good systems in place it saves you time and stops the stress and you have more of your day to do the things you want,” she said.

With a background in IT, Anne-Marie said showing other farmers how to use lean management systems in their office was her passion.

“It’s so good to go and help someone who is struggling. The benefits are so instant for them.”

‘If you don’t have to print it out then don’t. Have files on your computer where you put the invoices which have been emailed to you, instead of physical files.’

Even a change in the language used made a difference, she said.

“It gives it the same importance as the farm work, as feeding calves or milking or anything else.”

Different personalities did things differently and that was okay, she said.

“Some people like to do things at the last minute, others do it as soon as they can. It’s about what works for you.

“What is important is that you establish a routine and you know when everything has to be done by.”

Paying bills, working out GST, paying wages and PAYE filing all had weekly, monthly, or two-monthly schedules and a checklist was all important to make sure everything got done at the right time.

“It’s easy to let that routine slip on a farm, especially if something interrupts.”

She forgot to pay the GST after filing it once when she was called on to the farm to stand in a gateway at the last minute when stock were being moved.

“I didn’t realise until I got the letter from IRD.

“Now I have a tick list and if there is no tick in that box it means I haven’t done it and I need to get it done.”

A lean office took several months to work out, because of the monthly nature of dealing with payments, but the benefits were worth it.

“It’s incredible. You save so much time plus you feel in control.”

She admits to not liking doing things at the last minute.

“I’m an early person. That’s what works for me. I like to set a time each week when I’m in the office.”

Being early made sure any problems that arose could be dealt with at the right time.

Checking invoices and statements when they were emailed to you, instead of when they had to be paid, allowed time for mistakes to be fixed.

“Which means that if something is on a statement that shouldn’t be, then you don’t pay that amount and you keep that money for the month.

“Often if something is wrong and it is too late to change it and the amount is automatically deducted then it becomes a credit and you lose that money for two months.”

She’s an advocate of a paperless office – not a paper-free office.

“If you don’t have to print it out then don’t. Have files on your computer where you put the invoices which have been emailed to you, instead of physical files. There is no need any more to print things out. That just takes more time.”

Organising files so they can be easily found on your computer, using shortcuts on your desktop and naming files so they are displayed in the right order, all were lean management tools, she said.

“Going straight to where you need to go saves so much time instead of clicking through files.

“And if you don’t want to deal with something when it arrives, stick it in an in-tray and then you know where it is and can go back to it.

“As long as you don’t forget about it.”

But it’s just not about knowing where everything is on your desk or on your desktop of your computer.

“It’s also about knowing where you are in your business and the reporting systems you need in place.”

Knowing where you were with cash flow and budgets made sure you were on top of things, she said.

“If you know this month is going to be tight then you can say maybe can we put off doing that maintenance to next month or buying something or whatever.

“It also means that you can ask for an overdraft extension rather than getting a phone call from the bank because your payments aren’t going through because there is no money in the account.

“And that helps with the relationship with your bank manager because they know you are on top of things.”

Farming had enough pressures, with the weather and things going wrong, that having no surprises in the office took a lot of the stress off for many, she said.

It also made more time for farmers to grapple with compliance issues such as keeping Overseer up to date as well as DairyBase and other benchmarking tools.

“If you know where everything is then it is not a massive job to find everything to fill in the details for compliance.”

“If you don’t have to report to shareholders, or other stakeholders in your farming business then find someone to send reports to.

“It makes sure you keep to your routine, that you are not slipping up. That you know what is going on.

“Getting it out of your head and written down means you can think about other things instead of thinking all the time I must do this, or I have to do this.

“It gives you space in your head to think about other things. The things that are important.”

If a particular job in the office was the one that you really hated doing, then trying to figure out why was helpful, she said.

Was it because it was hard to remember how the website worked and if that was the case then writing down procedures, especially when they were only done every couple of months, made things easier.

“If you are in control then your head is clear, your business is clear and relationships with your business partners work better because things are being done on time instead of when it is too late.”

And back to that messy desk.

“For me, in my office, an empty desk is worse, because then I don’t know where everything is.”

Most people went farming not because they liked office work and having a tidy desk.

“People do it because they like being outside and working with animals and everything that goes with that.

“And if you have lean systems in your office then it will give you more time to go and do what you enjoy.”