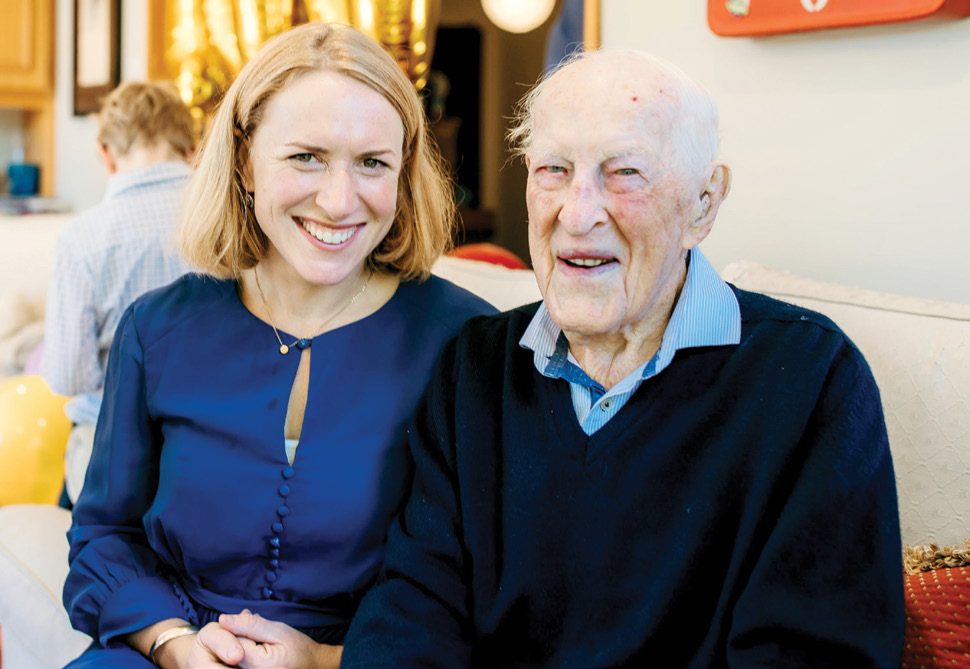 While Grandad Colin recommends sleep to cope with constant rain during lambing, Charlotte Rietveld celebrates his century of wisdom and humour.

WE’RE YET TO SEE WHAT DELIGHTS July brings but June sure has been memorable. In our little slice of Mid- Canterbury, the lush, wet year has continued. Exponentially. We’ve had 140mm of rain for the first half of June alone.

Farm tracks are rivers, paddocks unenterable and gateways a bog. We could be forgiven for thinking we were in eastern Southland. After a couple of years living there, I concluded the people were outstanding, the cheese rolls legendary, big beer bottles resplendent but the weather atrocious.

Give me a cool, crisp and clear Canterbury winter’s day where a rain-jacket needn’t constantly be within a one metre radius. I do miss Invercargill’s lovely wide streets, though, one must never underestimate the merits of parking ease.

Someone who certainly does not take such things for granted is my old mate Grandad. Having already lived well beyond expectations, he has now reached the almighty milestone of a century.

Despite his age being quite the achievement, Grandad would say passing a driver’s licence test at 100 is the feat. You sure do appreciate places of parking ease when you’ve been around for that long.

Given the circumstances, the 100th birthday celebrations remained fluid to the end. While the obligatory liquids were quaffed, arranging any event during a pandemic, let alone with a guest list of similarly aged mates is not for the …faint hearted.

If you rightly thought that pun was dreadful, you should hear some of Grandad’s jokes. Raising the betting standard to a triple-elevated century-old great-grandad pinnacle of Dad-jokes, he has some blinders.

Living in Methven, at the foot of Mount Hutt, he’s particularly chuffed with his latest; “I don’t need to go skiing, I’m going downhill fast enough as it is”. This, and various other favourite stories are readily repeated at regular intervals.

But don’t be fooled into thinking Grandad has lost his marbles, far from it. He’s well up to date with global politics, knows where the markets are at and don’t dare mention Mahuta. Having spent 50 years as a Mid-Canterbury cropping farmer, he can sort the wheat from the chaff. As one of the first local farmers to sell his ewe flock, he launched into lamb trading and never looked back.

It is here that he imparts his greatest life advice: “buy the small lambs”. I suspect Grandad’s advice is focused solely on the compensatory growth potential of lighter livestock, but I have backed any underdog ever since.

Years ahead of his time with all the wellbeing coaches that abound, Grandad’s advice is simple when it comes to adverse events. A downpour during lambing? “Sleep. There’s nothing you can do about it. Take 2 aspirin, put cotton wool in your ears and get a decent night’s sleep.”

How many Grandads are out there actively encouraging drug use eh? Told you he’s up with it. Not that I would particularly trust Grandad’s medical advice. Once when my grandmother was suffering from ill health and hyperventilating, Grandad sprung into action. Realising she was short of oxygen he had just the answer; retrieving the old Hoover from the cupboard, he switched it to blow and kept it directly in front of her. It’s miraculous she survived the day, let alone another 40 years.

But Grandad doesn’t let trifling issues such as mortality bother him. Recently placed under my four-year-old’s filterless interrogatory heat, he barely missed a beat.

“Great-Grandad, will you die soon?”

“Yes” he replied, “I suppose I will” while grinning. He hadn’t recognised he was volleying with his own genetic bluntness until the reply put him in his place.

“Oh right. Do you have any biscuits?”

A wise investor to the end, these days Grandad is craftily taking out The Press subscriptions at three-monthly intervals – no refunds should you pop your clogs you see. Alas, I inherited neither his farming nor financial prowess. Anyone want to buy my small lambs?