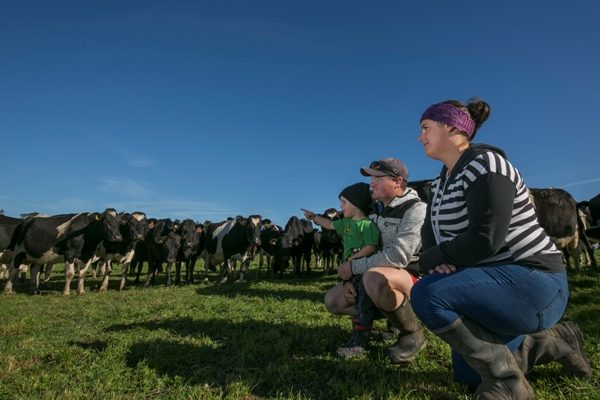 When Matt and Jennifer Davison got a call from their grazier to say there was a chance their cows had been exposed to Salmonella they had no idea the heartbreak and stress that lay around the corner. Anne Lee reports. Photos by Johnny Houston.

Almost three years on Matt Davison remembers only too well the surging feeling of anxiety, every morning as he headed out to check on a 300-cow mob succumbing to Salmonella Brandenberg.

“I’d wake up and the first thought was what am I going to see when I get out there? By the time I got outside and put my boots on I’d have to throw up. I was so scared about what I’d find. Yea it wasn’t good,” he recalls.

Now 50-50 sharemilkers on the same 1100-cow, Canterbury farm, near Dunsandel, Matt and Jennifer were lower-order sharemilking for Jennifer’s parents back then, in 2016.

Just over three weeks into wintering a 300-cow mob with graziers near Dorie, they were alerted by the grazier that a herd of heifers on the property had Salmonella.
They immediately returned their cows home and quarantined them and they and their vets thought they’d dodged a bullet when after a week they were still looking healthy.

“I went out to shift them and there were more than 12 cows that wouldn’t get up,” Matt says.

Deceptively they all responded quickly to calcium and with the help of the vet that morning it looked like they had the problem sorted.

“But by the afternoon there were half a dozen dead cows and 12 that were wonky,” Matt recalls.

The sick cows in the mob of 300 were brought back to the paddock next to the house and for the next couple of days they persevered dusting feed, treating cows with antibiotics and anti-inflammatories and bagging cows but Jennifer says it was clear this wasn’t a calcium deficiency.

The cows back in the original mob were also unwell and most had completely gone off their feed, not touching their new break.

“I threw a bit of a tantrum and took some jars with faeces down to the vets to get it tested.

“I was actually relieved when we knew it was Salmonella because then we knew what we were dealing with,” Jennifer says.

The couple had taken their biosecurity seriously right from when they had returned the cows from the graziers so as to ensure that if the animals were infected, they would not spread it to other cows or to them and their staff.

Salmonella is zoonotic, which means it’s a disease easily picked up by humans and can cause serious illness.

“We fed them last and then washed the tractor down,” Jennifer says.

“Everything was done last over there – so moving fences, feeding the cows. We’d bring the tractor back and the bikes and they’d all be washed down and sprayed with Virkon,” she says.

Once Salmonella was identified they stepped up their biosecurity measures even further, keeping staff away from the infected cattle.

“We couldn’t risk them catching it and to be honest it was just too awful for them.

“We had a housekeeper/nanny at that stage for our three kids – including our five-month-old baby – and we made sure she disinfected the floors all the time.

“The dog and cat had to stay outside in case they’d stood in something; we had a disinfectant footbath at the back door and had a different set of overalls and boots for when we were with those cows.

“I even went and bought masks to make sure it didn’t get in our mouths,” Jennifer says.

There was a period of two weeks where the disease was at its most virulent and the couple still take a moment when they think about that time.

Jennifer’s father, who still owned the cows then, had been helping them.

“But it got too much for him to see the cows like that and we just told him we’d deal with it,” Jennifer says.

The cows would become lethargic and had rapid weight loss.

They aborted and most had to have the calves pulled because the cows were too weak to push them out.

If they showed signs of the disease but didn’t abort they died, Matt says.

Those cows that slipped and survived were dry.

Foetuses that aborted later were rotten.

“Some people love cats, some people love dogs, well we really love our cows and to see the light in their eyes burn out – it’s pretty soul-destroying,” Jennifer says.

By the start of calving the storm had died down and they were able to vaccinate the surviving cows but they needed to bring them to the farm dairy.

With the heifers milking and main mob calving well underway they spent hours cleaning down the whole area and spraying it with bactericide after they’d vaccinated the infected mob.

They went along the track where the cows had walked scraping up the dung and spraying the area.

Most of the calves born from the exposed mob, once calving began, were euthanised and milk from that mob wasn’t fed to calves.

But some calves were kept to make up replacement numbers and were reared in a separate shed.

Jennifer says they did get scours in those calves and they were treated with an antibiotic and anti-inflammatory.

They were too young to vaccinate but they didn’t lose many and the effects weren’t too serious.

“We were terrified of it getting in the rest of the cows but we managed to contain it to within the 300 we’d had at grazing and in the end we managed to keep cow deaths down to about 15.

“There were 60 altogether that were dry or died, so 20% of that group were lost for that season,” Matt says.

When they tallied the full cost, including the cost of antibiotic and anti-inflammatory drugs, lost production and animal losses it totalled $90,000.

They vaccinated their whole herd twice in that season – in late July and in September and continue to vaccinate each year at the end of the season.

“That was probably the cheapest thing we did that year. It’s 80 cents a dose, cheapest insurance premium you’ll pay,” Jennifer says.

Since then they’ve gone on to further protect themselves by keeping all their four-legged assets grazing on land under their full control.

“We have a closed herd now, we rear all our own young stock and winter everything ourselves within the business,” Matt says.

The couple notified all their neighbours as soon as they knew what they were dealing with and say even though they were the talk of the district at the time, people were supportive and it was imperative for others to know as soon as possible.

The experience opened their eyes to the importance of biosecurity and their message to other farmers is to be proactive.

“We want people to know about the impact of this disease so they can take action,” Matt says.

Following the increasing number of cases of Salmonella Brandenburg from 2015 in Canterbury, Dr Sean Daly a regional technical advisor for MSD Animal Health surveyed some affected farms and reported in the New Zealand Dairy Cattle Veterinarians newsletter. The goal of the survey was to increase veterinarians’ and farmers’ understanding of the disease.

Nine out of 10 farmers in the survey who vaccinated with Salvexin®+B (MSD Animal Health, ACVM No. 7886) in the face of a S. Brandenburg outbreak on their Canterbury dairy farms in 2017 reported fewer new clinical cases following the vaccination. The farms in the survey ranged in size from 250 to 1200ha, milking 660 to 2000 cows.

The first cases of the disease occurred in late May with the last outbreaks resolving in late September. Farmers reported up to 35% of heifers and 7% of cows affected in outbreaks with up to 35% aborting or producing a still-born calf and up to 9% of heifers dying. Death rates in mixed-age cows were lower.

Contrary to previous understanding that the disease hit first-calving heifers and then spread to cows, three farms had the disease in mixed-age cows only. Farmers reported dead calves, rotten calvings, abortion, assisted calvings, diarrhoea, fever, depression and death of animals. Four farms had the disease in calves with up to 170 calves affected on one farm. On two farms people became infected with the disease showing that it is a risk to human health and safety on the farm.

In his report Daly noted that the incidence of S. Brandenburg has been increasing over the past three years in Canterbury with outbreaks around late gestation and calving. S. Brandenburg was also reported in unvaccinated herds on the West Coast
last spring.