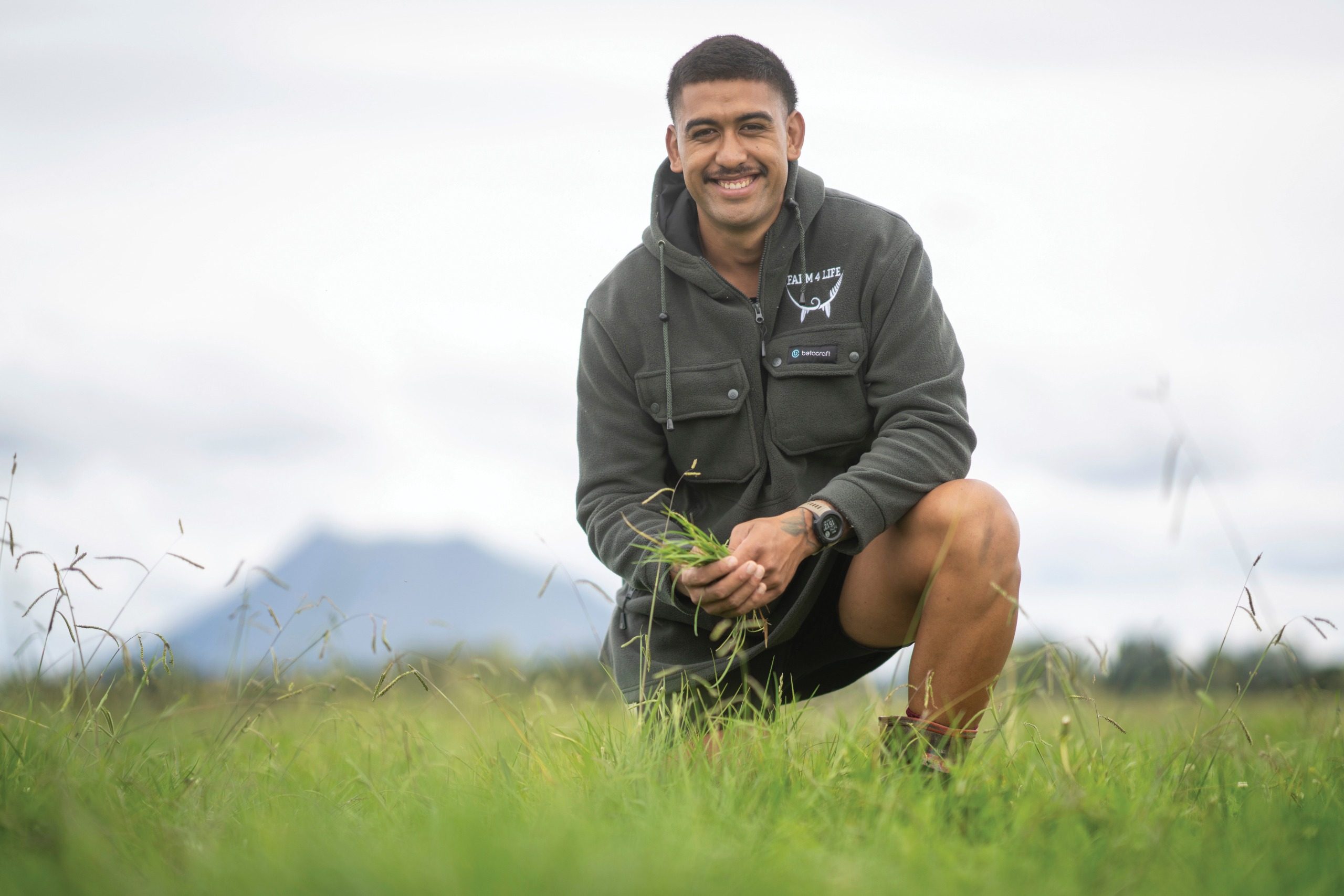 A job offer, two days before he was due to fly back to Australia, believing his quest for a career in dairying was over, propelled Quinn Morgan from farming novice to winner of the 2021 Ahuwhenua Trophy Young Māori Farmer.

“ I had got knocked back on quite a few jobs because I had no farming experience and had booked a flight back to my family in Perth when Sam and Kate Moore gave me this opportunity, and I’m really grateful to them,” says the 26-year-old father of three who is farming at Galatea. Quinn did his first year as a farm assistant for Sam and Kate’s 570 cow sharemilking contract at Otakiri. Now he has a managing position for the couple in their sharemilking job at Galatea.

Quinn was born at Taumarunui and lived at Whanganui until his teens when his family moved to Sydney. He met his wife Samantha in Australia and in 2019 the couple were living in Perth where Quinn was a personal trainer in a gym.

They made the decision to settle in New Zealand when they returned to get married in November 2019. “By January 2020, I was on a flight back to New Zealand with a suitcase and big dreams for our future.”

Those dreams were for Quinn to join the NZ Police Force but Covid-19 and recruitment caps meant there were no openings in areas, where to be close to family, he wanted to work.

“Luckily I had family in farming and reached out to them. Basically, I went from couch to couch learning to milk cows and fencing to pay my board while I looked for a job.”

Changed his perception of dairying

That introduction to farming changed Quinn’s image of the industry. “Dairying is nothing like I thought. I had heard a lot of bad things about farming, but I’ve discovered it’s the complete opposite.

“I’d heard the people were stand-offish, it was not family friendly and not good for the environment but none of that is true. I’ve met some great people who have helped me and it’s the most family friendly job I’ve had.

“No matter the season, milking, mating or calving I’m home at the same time for breakfast to catch up with the kids and Samantha. Samantha is really into dairying too, studying for a diploma in agri business. That makes us more of a team as we can talk together about dairying and our goals to be self-employed.

“Dairying ticks the long list of wants we had as a family and that wouldn’t have happened without our great employers sticking their heads out and giving us the opportunity.”

Kate Moore says the decision to hire Quinn came after a referral from the Gibson family in Reporoa who had interviewed him for a position. “Quinn was among their top three applicants, and they suggested we interview him. We saw Quinn had a great attitude, including to his previous job, and was keen to learn and progress in dairying.”

For Kate and Sam, taking on Quinn, and another staff member Michael Barclay who is also new to dairying, is a way of paying it forward, in gratitude for the opportunities their previous employers have given them in the industry. Kate says it also recognises the benefits people who have excelled in other professions and areas of life bring to the industry.

The couple have encouraged Quinn to undertake Primary ITO training and other learning opportunities. Kate also encouraged Samantha to study for the agri business diploma and has helped her and the three children feel welcomed into the community.

They also, along with Primary ITO tutor Peter Mark, encouraged Quinn to enter the Ahuwhenua award.

“I have played sport my whole life and love the competitive edge. As a newbie to dairying, I saw it as a chance to test myself against great farmers and knew it would be a big learning curve,” says Quinn.

“When I took a serious look at the award I was blown away and reached out to other past entrants and winners to ask questions. They were happy to share their time with me and then I knew it would be good for my career if I could get to the finals and help us land where we want to be in future.

“The biggest thing for me was being around all the other finalists. I learnt so much and it was a great experience. When we got the call to say we had been named as finalists, Samantha cried.”

There were more tears and astonishment when Quinn was announced the winner of the Ahuwhenua Trophy Young Māori Farmer award at the May dinner in New Plymouth attended by 800 people.

“I didn’t know how to feel and didn’t get to prepare my speech well as I didn’t think I would win. That was not about self-doubt but about the calibre of the entrants and that I was new in the industry. Standing shoulder to shoulder with so many great farmers was overwhelming.

“When I won, I came to understand that this is bigger than myself. I am now a link in the chain of all past winners and like those who reached back to pull me forward, my focus now is to give back to help pull forward the next winners.”

Quinn also wants to help raise the image of dairying with other young people and the wider public. “We are grateful for the opportunities winning has given us and that includes doing media interviews which I hope will help get a lot more people interested in farming. We want to shine a positive light on farming and what it has done for us by painting a true picture of what dairying is.”

Changing careers and countries has taken tenacity and fortitude for both Samantha and Quinn who were apart for six months because of Covid-19 restrictions. “It was hard. Samantha and the children were in Perth and I was in New Zealand. When I left our youngest was barely walking and when I next saw him, he was running around. I am grateful that Samantha is strong and had good support from family in Perth.”

Samantha and the children, Peyton now 4, Reign now 3 and Roman 2, spent two weeks in isolation when they arrived in NZ preparing to join Quinn on a farm and with a house Samantha had never seen.

“We just love the life here. It’s a great place to bring up kids, so different from Australia with concrete backyards and neighbours so close but you don’t even know them. Our closest neighbours here are on the next farm, but we see them a lot.”

Quinn and Samantha’s long-term goal is to be self-employed in dairying. “We’d love to get our name on a bit of dirt and secure a farm but realistically the goal is to be self-employed. Before winning the award we had a clear cut plan but now our horizons have been broadened as it’s opened up so many doors. We have to navigate which is the best way to go and that’s a good problem to have.”

Ahuwhenua Judge Aaron Hunt says Quinn exemplifies all that is good about young Māori who are making successful careers in the primary sector. “Quinn has shown great commitment to his work, excellent leadership and will do a great job as a role model for other young Māori contemplating a career in the agribusiness sector.

“Every day there are new opportunities opening up for young Māori as new land is brought into production and other land improved. The training undertaken by the finalists have helped them establish themselves in good jobs and provided an excellent platform for them to progress within the sector.”

To find out more visit www.ahuwhenuatrophy.maori.nz