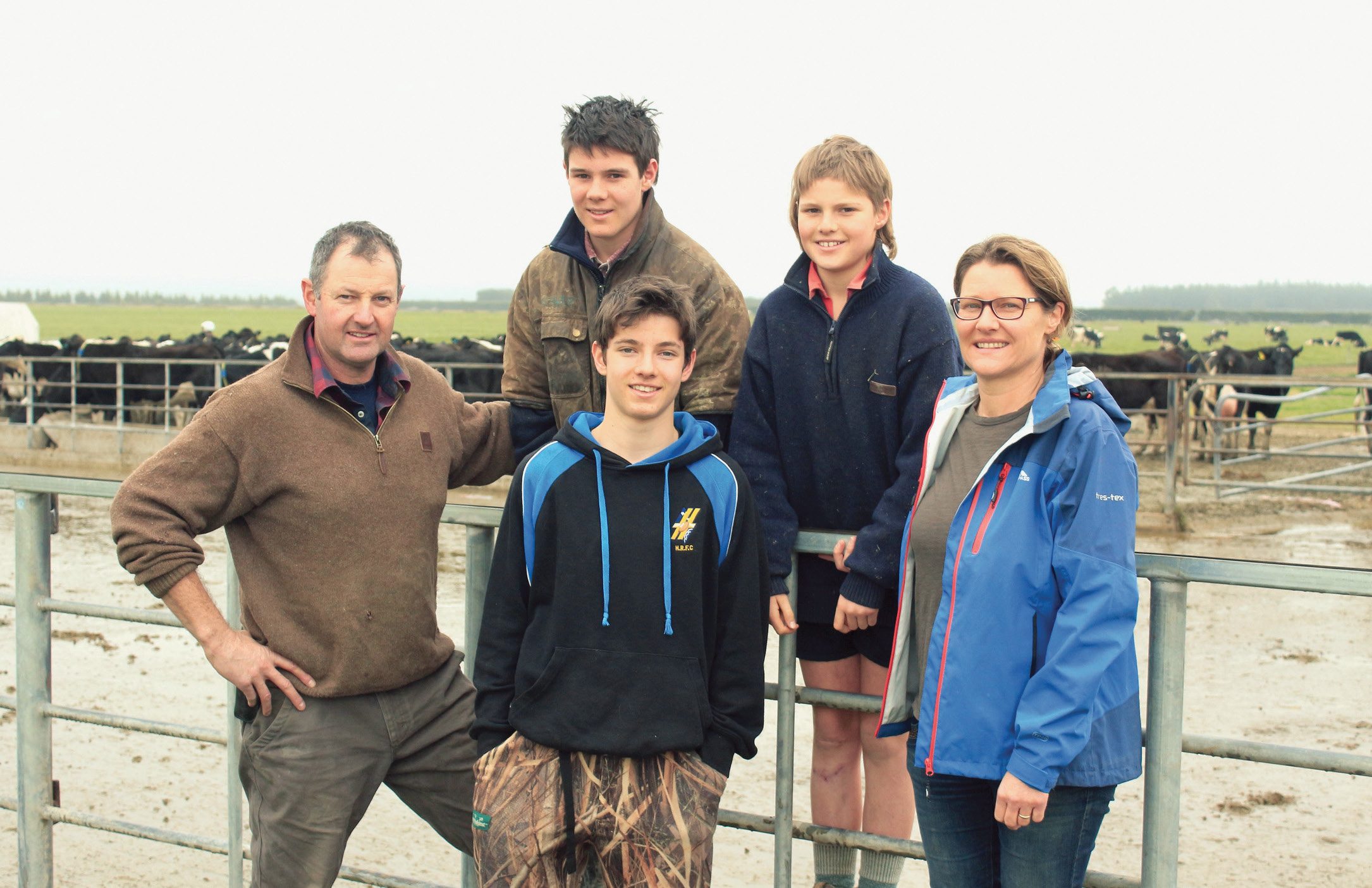 A farming family found ways to settle sons and daughters
on farms by focusing on growth. STORY AND PHOTOS BY: PENNY CLARK-HALL

A North Canterbury family has bucked the historic trend of sons inheriting the family farm and daughters missing out.

Three of four siblings in the Norrie family – Hilary, Joc and Malcolm – took the opportunity to own their own farms. Their brother Geoff chose not to go farming.

“Growing up there were two farms and two brothers and you just sort of thought it was always the intention that one brother would get one farm and the other would get the other farm,” says Joc.

“That was just the way it was.”

Fortunately, her father Dougal Norrie was savvy enough to install his own border dyke irrigation system in the 1980s, paving the way for him to take the next step into dairy farming. Dougal developed one of the first three dairy farms in the Culverden basin and was the first local farmer to do a dairy conversion from sheep-beef farming.

“You know he was a Corriedale sheep breeder. All of his peers at the time thought he had lost the plot,” says Joc’s husband Peter Kinney.

“We do things that we think are quite big sometimes, but this was next level. He was ground-breaking.” This early financial prudence and vision allowed Dougal to expand and create opportunities for all his children. Having two sons in a position to help develop the border-dyke irrigation was important to the success of the financial position of the farms.

Peter is from a sheep and beef farm further south and Joc still remembers him declaring over the dishes in their flat that he would never go dairy farming.

“It’s a big move for someone that grew up whistling at dogs,” says Peter.

He found himself changing his tune during his own family farm succession process, realising there wasn’t enough capital to make it work for everyone.

“The key thing is profitability to drive farm succession. I had three other brothers, two farming and the youngest at university, and three sisters,” says Peter.

“We ended up leaving the family farm. My oldest brother is still there farming with his family. My other brother and I went sharemilking together and leveraged off the asset (family farm) to get going.”

SHAREMILKING THE WAY TO EQUITY

While it was pretty raw at the time, Peter says he thinks sharemilking was the key in creating equity. Sheep and beef farming lacked profitability back then.

Growing up on a sheep and beef farm and attending Lincoln University gave Peter a broad range of skills beneficial to dairy farming. Peter says this helped them find opportunities to grow.

Joc was working at Environment Canterbury at the time. The off-farm income was beneficial to their early growth.

Timing is everything and Peter and Joc reached a crossroad where they had to decide on whether to look at an equity partner option with Dairy Brands, or talk to Joc’s parents about going sharemilking on one of the family farms, Ballindalloch.

After sharemilking on the family farm for two to three years and some conversations with Joc’s parents, Dougal and Diane, they decided to invest in the farm. By building a new dairy shed and upgrading other farm infrastructure they were able to buy in to become shareholders in Ballindalloch Farm, while continuing to grow their equity as sharemilkers.

That was the beginning of a 10-year farm succession process, where the family navigated how this would happen, overcoming challenges along the way.

Dougal confided in his accountant, who helped them work through and bring options to the table.

“Our accountant, Peter Glassford, gave us invaluable advice and guidance throughout the whole process,” said Peter and Joc.

“When you break it down the key thing was that Dougal created an opportunity by what he’d done in farming and then we brought our own equity and strong cashflow from our sharemilking business,” Peter says.

By bringing it all together and making it work for everyone they were able to turn Dougal’s asset base and their dairy farming skills into a growth opportunity.

“By introducing something that’s profitable to the equation, you allow growth, rather than dividing something up and making it smaller.”

Joc emphasises it’s not just the capital that made the succession work.

“Peter was pretty driven in wanting to optimise and get the best out of the sharemilking business. You’re coming in with top end skills to add value to the business as well as giving Dougal the confidence in your ability.”

They agree with a phrase coined by one of their brothers-in-law – ‘a good test for succession is that it has to pass the Christmas dinner test’.

“At the end of it, your family still needs to be together,” says Peter.

“I think another key part is that fair and equal aren’t the same thing. You can’t be equal with everything, it’s just about being fair and transparent.”

When it comes to lessons learned for how they will do their succession for the next generation, transparency ranks highly. They define it as “open communication all the time”. While they haven’t got a plan set down yet on how it will work, they say that is intentional.

“It will change all the time. It’s just about being open to what the direction is and getting the kids on board with understanding the difference between fair and equal.”

Setting up their business so they can create opportunities for their four boys is front of mind. Whether that is leveraging off the asset, not farming at all or helping them all into farming, Joc says they have the ability to do that.

They have since grown their asset base to three farms (dairy farm, run-off farm and a beef unit), and are business partners in a sharemilking venture with a previous employee. However, the trick is not making it too easy for them.

“If you do it too well for the next generation, they can potentially lose it. They need the challenge to be able to buy into it and create their own opportunities. You can’t just hand it to them,” Peter says.

While growing in the dairy industry would be great for succession Peter says you have to remain true to your aspirations. His was to go sharemilking so he could get back to sheep and beef farming.

DON’T HOLD ON TO THE PURSE STRINGS

Joc is wary of not creating a ‘lost generation’ in her children where they hold on to the purse strings for too long.

“You don’t want to wait till they’re in their 40s before mum and dad start to let go of the reins. They’ve still got to be young enough to grab those opportunities and run with them while still in their prime,” she says.

Aware of how difficult the subject is, Peter advises that the plan should be pretty clear before involving a solicitor to create any agreements.

“The tone of legal wording can escalate an already sensitive situation, and what was a hard subject just got even harder.”

“You need to sit down with the family and have the kids involved from an early age and it’s not just a one-off, ‘right guys, we’re gonna do farming what do you all want?’ It’s having those conversations now. Just talk to them,” Joc says.

They are wary of the trap that some families fall into, where in trying to make it equal, they make it unfair.

If anything is certain in farm succession it is that family dynamics will change as children marry and parents age. Peter and Joc say the ability to keep business units separate, rather than trying to grow one big thing, is helpful to keep boundaries clear and opportunities available for future generations.

The succession process started in 2000 and took about 10 years. The key to the success of Dougal’s succession was that he and his wife Diane were strong enough farmers to get themselves in a financial position to do so.

Dougal put in his own border dyke irrigation system on his two farms and then built a dairy shed on each. This helped him later with farm succession as he was able to capitalise quicker to buy another dairy farm.

Peter and Joc moved to Ballindalloch Farm as sharemilkers in 2000 and bought into the ownership of the farm in 2003. Sharemilking allowed them to buy into the farm quicker – scaling their business now to three farms.

They had a different accountant to Joc’s father Dougal to ensure independent advice. Dougal’s lawyer Mark Tavendale was critical to the process as he was collaborative and an effective communicator. He was strong when he had to be and structured the succession well.

As a banker it is really critical to understand what the family wanted to achieve.