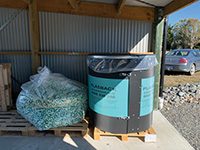 The scheme involved farmers, and vet staff, collecting the tubes and taking these back to vet clinics for collection. It ended in July.

“There is clearly a desire within the industry from vets and farmers for this type of scheme,” says Zoetis sustainability lead, Kristen Baxter. She is in the process of sending out a survey to vet clinics to get feedback on what worked and what didn’t.

“One of the questions I am going to ask is, can they give an indication of how many tubes were returned by farmers versus how many vet staff brought back? I would like to know what the uptake was from farmers.”

Zoetis plans to continue the Teatseal Tube recycling scheme next year, with the possibility of recycling other items such as plastic bottles.