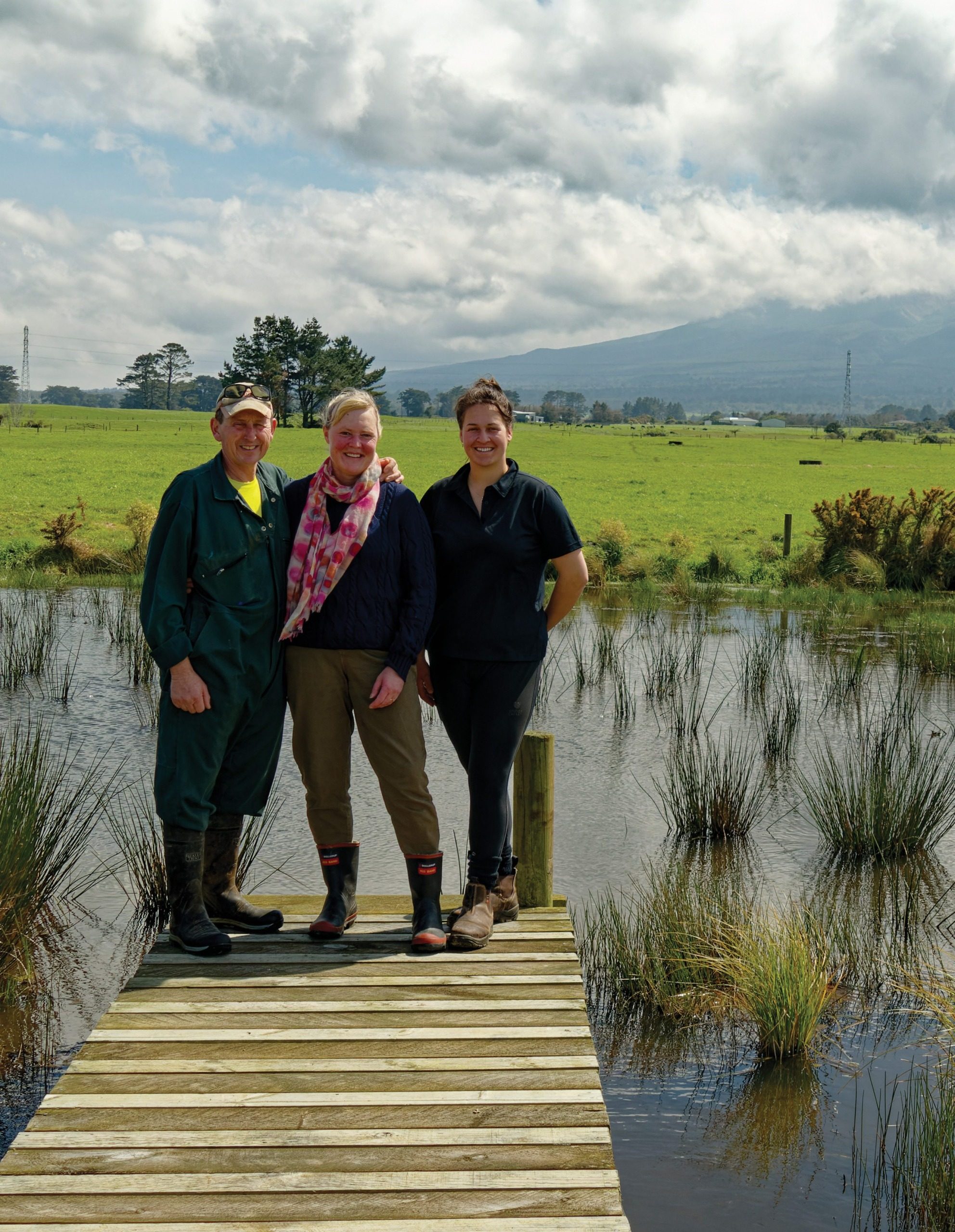 Farming on the high-rainfall slopes of Mount Taranaki brings its challenges to a project to boost efficiency and reduce emissions. By Jackie Harrigan. Photos: Ross Nolly.

Donna and Phillip Cram have undergone their own quiet step change project over the last few years, quietly working away at increasing the efficiency of their farming operation.

“More production from fewer cows is our aim for reducing emissions as part of the sustainability of our farm business for the future.”

Wylam Dene Farms at Auroa is home to Donna, an accountant by trade, and Phil, a diesel mechanic from the United Kingdom. They met in the local Oeo pub and she encouraged Phil into the industry.

They started out dairy farming on her parents’ farm and worked up to farm ownership in the same district by leasing a farm, along with sharemilking, rearing and leasing out extra heifers and rearing bull calves and selling excess cows to the South Island, and buying with a large mortgage and with vendor finance left in. More recently they purchased the back half of her home farm to add to their dairy platform. The Crams’ 107-hectare dairy farm is on the flanks of Mount Taranaki at Awatuna, up the mountain east of Opunake where rainfall is over 2000mm, and sometimes up to 2500mm, which does bring its challenges, Donna says.

The Crams were asked to be part of the Step Change project, and come up with three scenarios to model what the changes to their farm system would do to their nutrient loss and greenhouse gas numbers and farm profitability.

The results were modelled for each scenario, using their base figures from the 2019/20 season, and then the couple set about making changes to the system – in essence testing the modelling. 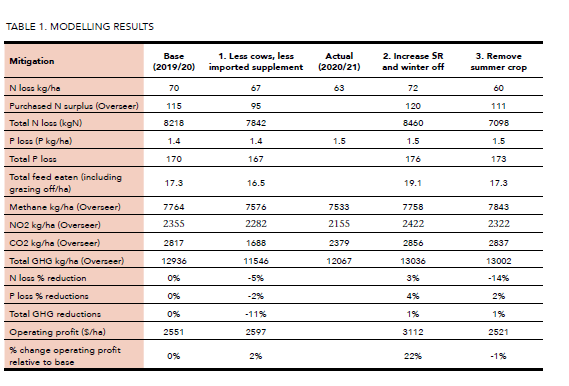 Dropping cow numbers from 276 to 250 cows and winding back the system from 4 to 3, meant they reduced supplement through their in-shed feeding and profit was modelled to increase slightly while the total GHG reduction should have dropped by 11%. (see Table 1.)

Donna and Phil have been pretty happy with the results of the changes.

“We are just trying to understand Overseer and how it all works, we are thinking it will take a few years to figure out the most sustainable system for us.

“Having dropped out the 25 cows we have maintained production and I think we are kind of where we want to be with that.

“If every season was the same, the job would be easy – things are always changing.

“This year we went through the winter with no palm kernel for the first time in three years.

“Pasture growth rates are monitored closely and by budgeting carefully, we reduced our methane and everything has actually reduced.”

One unforeseen and very unwelcome problem was an unusual outbreak of mastitis, the unusual Klebsiella strain, more common in the UK where cows are housed indoors.

“It was a nightmare because it was subclinical – we had to test cows constantly and do an emergency herd test. Our vet was able to come and help set up a system of testing, but we lost 20 cows from the herd after their cell counts were spiking.

“We had to isolate the cows until December and got rid of the problem but we ended up culling them. So we lost around 1500kg milksolids across the season and $20,000 in lost production and costs.

In the actual performance for 20/21 season Donna says the results on methane, NO2 were all actually better than the model suggested it would be, but CO2 was higher, resulting in higher Total GHG than modelled – maybe due to less dilution with the lower kg MS production than anticipated due to the mastitis outbreak.

Donna was pleased that both N loss and Purchased N surplus dropped considerably in the modelled scenario, N loss dropping from 70 to N loss was reduced by 5% and P loss by 2%. Applied nitrogen was reduced from 159kg N/ha to 131kgN/ha and Donna says they are now using a coated product and have taken the effluent block out of the nitrogen round.

“We have been working pretty hard to increase our P and K levels and through all paddock testing for the past three times over five years and we are at the stage where we just want to apply the nutrient exactly where it is needed.

“Pasture and crop eaten has definitely increased this year.”

The new effluent block of 24ha will not be needing or receiving any nitrogen, so the N application will be further reduced to 110kg/ha.

Wintering cows off and increasing the stocking rate was the second scenario, but Donna and Phil have decided not to pursue that strategy.

“We used to winter our cows off until two years ago, but the cows didn’t come back in the condition we wanted – we prefer to manage the cows ourselves and control their condition.

“We have to make the decisions for our property as we don’t have a support block.

“And increasing the stocking rate and having that many feet on the ground later in the spring when it is usually so wet is very difficult, we have to manage that with a lower stocking rate and strategies to protect our pastures.”

The modelling showed a potential 22% increase in operating profit from that scenario but slight increases to GHG emissions and N and P losses.

Option three was removing summer crop and the model showed a 14% reduction in N loss and only 1% reduction in GHG emissions and no real change to operating profit.

This season the Crams plan to halve the cropping area.

“In the past we have had 6.2 hectares of turnips, for feeding out through summer when it gets relatively dry.

“And last season we were so lucky that we had used no-till crop establishment because honestly from the day we sowed it, it didn’t stop raining, so we would’ve lost so much topsoil – it was terrible.”

This year they plan to sow 3.5ha of turnips, and make more silage, to take the pressure off in late spring when we are really busy, with mating and trying to get crops in.”

As a Climate Change Ambassador and a Dairy Environment leader, Donna is very aware of the need to reduce GHG emissions by 10% by 2030.

The goal for this season is to reduce crops by half but keep the stocking rate the same. Pasture management becomes difficult with the lower numbers but with increased fertility and pasture management the aim is still to reduce bought-in feed. Managing the effluent block separately will reduce overall nitrogen use.

“We need to make money because we have a substantial mortgage and are trying to get a balance between mitigating nutrient and GHG and being economic.

“We have also been investing in infrastructure to make life easier. We put a Dungbuster into the dairy yard, to save time with hosing down – saving 20 minutes each day over 270 days of lactation is a lot of time.

“It’s about making life easier so that people will want to be on our farm.”

The Crams have also installed Cow Manager technology this season, and while Donna says it’s taking a while to get to know their cows at that individual level, she says it certainly is great to pick up any sick cows much quicker.

Mating has been a breeze this season with the CowManager system talking to the drafting gate and auto drafting cycling cows out for mating.

“It’s made it so much easier – Phil even had time to have a weekend off – unheard of in the past – to continue his cycle training to take on the East Cape to Cape Egmont cycling trip,” Donna says.

They have also taken on a part-time staff member, Jacinta Kete who is sharing time with a neighbouring farmer.

“She spends 60% of her time with us and 40% with John and Kristina Wyatt, on a three week roster of seven on:two off and then eight on:foiur off.

The Crams have had a 4500 square metre constructed wetland built on their farm in conjunction with Taranaki Regional Council which the TRC tests monthly with continuous sampling at 30 minute intervals to measure turbidity and nitrogen.

Fourteen months of data has been collected and the numbers show good rates of nutrient extraction from the area which drains a catchment of 18ha.

The area takes a mixture of flow from the existing tile drains in the areas as well as surface runoff, says Chris Tanner, NIWA principal scientist, Aquatic pollution.

The constructed wetland at the Cram’s farm is removing 40% of total nitrogen and 20-30% of P and seeing a 60-80% reduction in sediment and E coli from the drainage water. The wetland cost about $50,000 to construct, set up monitoring gear and plant up, but has been designed with a 20 year+ lifespan, with initial sedimentation ponds before the wetland allowing sediment to be removed to stop siltation of the shallow wetland areas.

The NIWA involvement and MPI funding under the Sustainable Land Management and Climate Change Programme has allowed intensive monitoring, in collaboration with Taranaki Regional Council. The data will form the basis of numbers proving the efficacy of the wetland and be included on the farm environment plan as part of mitigations to reduce nutrient loss from the dairy farm, and other farms who build similar structures. Six wetlands have been similarly constructed and monitored in five regions and will be opened to farmer field days to encourage others to consider the mitigation strategy.

“It’s just another nutrient loss mitigation tool, one that many farmers could use with residual wet areas where they could be developed.”

Donna and Phil have embraced the development and made it into a pleasant area for their family to spend time on the farm.

“We are all learning together.”

Chances are anyone who has driven around Mount Taranaki will have noticed how many bridges there are over streams and rivers radiating off the mountain.

There are a lot of catchments and Donna was concerned at the way regulations were moving and felt farmers needed to start leading their own destiny.

So along with the Dairy Environment Leaders forum members and Federated Farmers members in the Taranaki area she marshalled the troops. With help from Venture Taranaki and advice from Thriving Southland and a number of other catchment groups, an umbrella group called Taranaki Catchment Communities (TCC) was formed.

Donna’s original Predator Free group has been morphed into a Catchment community group – the Awatuna/ Auroa group, called ‘Farming for the Future’ with oversight over five streams.

The existing group was 30 farmers involved with Predator Free Taranaki and working on ridding Mount Taranaki of predators. They have a LOWRA system monitoring traps in the national park, alerting the group when traps have been set off and need resetting.

There are 13 catchment communities funded under the TCC umbrella thus far, and three more are keen to join. School groups of agri-kids are also getting involved.

“We have district groups, a high rainfall group, sheep and beef farmer groups – we are trying to empower farmers with knowledge to work with each other, within their environments, and to look at their economic, social, wellbeing and environmental needs.”

A seed funding grant of $50,000 from MPI allowed facilitator Trish Rankin to meet with each community group to help them identify what their challenges, opportunities and needs were.

She was amazed at how different each community was.

The group then managed to secure a $1.25 million grant from MPI, to help meet the needs of the groups along with funding the testing, monitoring, and handling of water quality data, with wrap-around support from the Taranaki Regional Council and other farming and professional groups in the community. Seven catchment co-ordinators are being upskilled to facilitate the groups and lead the initiatives.

“The important thing is that the communities are farmer-led, farmer-driven and cross-sector, and people are keen to get involved – it’s really exciting,” Donna says.