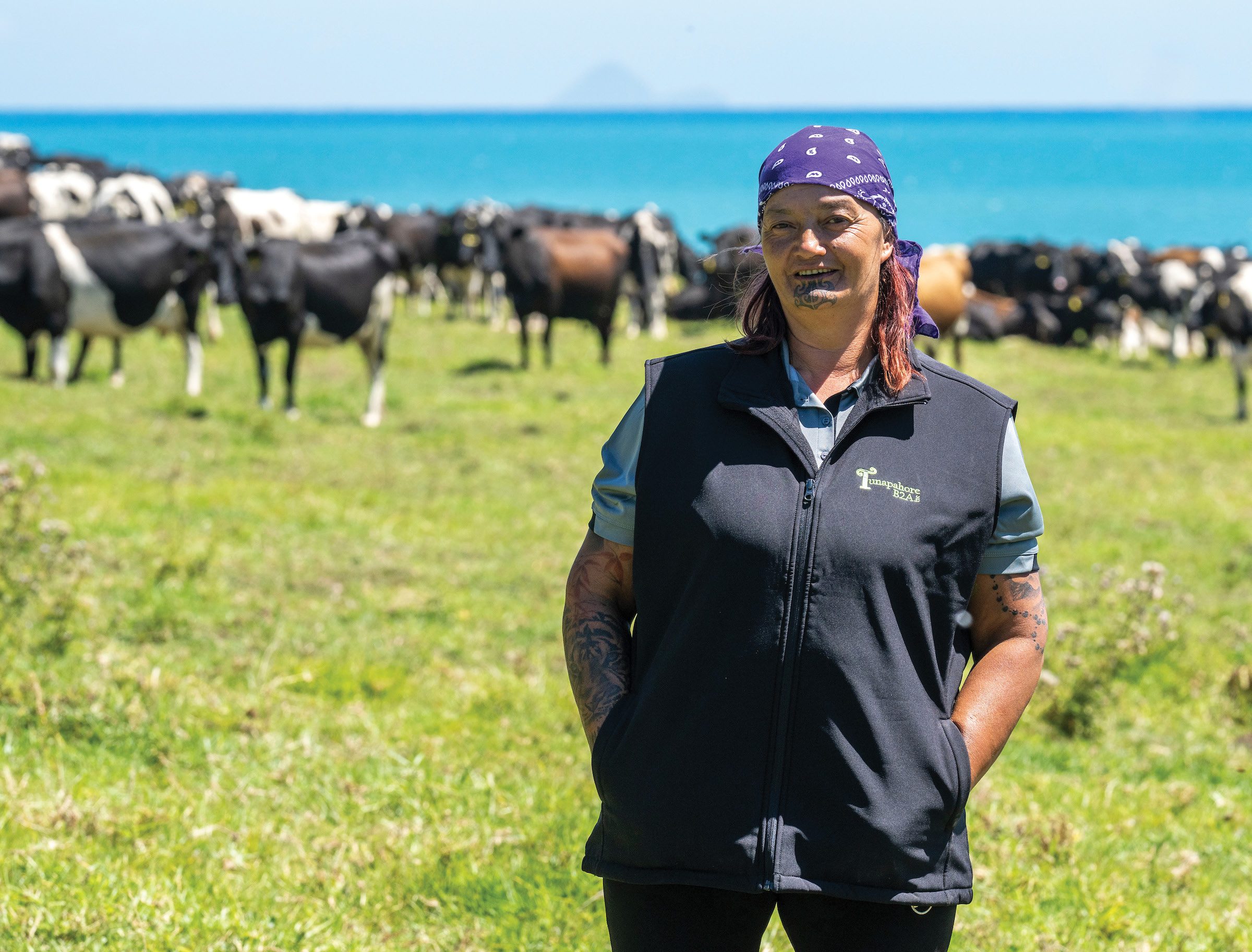 When you start driving east of Opotiki, it can feel like you’re going back in time. The $3-million holiday baches in Ohope give way to small old houses. Winding around the coast road, the land is divided into orchards, forestry and dairy farms and just before the small township of Hawai, is the Tunapahore Maori Incorporation dairy farm.

That’s where I find farm manager Janet Poihipi busy cooking pikelets for the meetings she has with this journalist and then the farm adviser.

The 53-year-old is preparing to go away on holiday for a month – her first holiday in six years and her anxiety about leaving the cows and calves is growing. Not that she doesn’t trust the relief manager that will step in for the four weeks she will be away, she just doesn’t like leaving the farm and her stock when she goes anywhere.

“They’re my babies, I’m always in a hurry to get back to them. I absolutely love being hands-on with the stock – the farm is my pride and joy.”

Janet milks 400 cows on the Incorporation’s farm with one 2IC and one relief milker and also runs the young stock on the runoff next door.

She admits she might not have the best work/life balance, and her children are always telling her she should have more whanau time. But she is content when she is out working onfarm.

It took Janet half her life to find out that her ideal vocation was working on a dairy farm. Born and raised in Porirua, Wellington, to her Maori mother and Czechoslovakian father, she was the youngest of their three children.

It wasn’t until she was about 13 when she was visiting her grandmother in Opotiki that she realised she had 11 other siblings to her mother’s first marriage.

That was also where she met her husband Whitiaua when she was 16 and the couple moved to Wellington then Invercargill where they spent 22 years working and raising their six children.

Janet worked in shearing sheds while Whitiaua worked on a drystock farm. When their first mokopuna was born, they realised their children and grandchild had no connection to their people and culture and decided to move back to the Bay of Plenty.

“One day it was like a lightswitch, we needed to go home because they didn’t know any of their whanau. We packed all our things up and freighted them up.

“When we got up here I wished we had come to have a look first. A lot of our whanau were living how they were when we left, still in shacks with no running water.”

It was a big change for the children, getting back on to maraes, talking Maori, things they didn’t do down south.

“It was hard, our kids wanted to go ‘home’ to Invercargill.”

Finding a job was the next challenge and Janet did some work in a kiwifruit orchard which she didn’t enjoy. They got a house in the township of Hawai and the Tunapahore Incorporation dairy farm was just up the road.

“I thought I could give milking cows a go. There were sharemilkers on here at the time, Pete and Liz Quarry.

“The day I came up to ask about a job, Liz was having twins and the helicopter came because she was having difficulty. I told Pete I didn’t know how to milk cows, but I was a fast learner.”

Janet ended up staying on as a relief milker as well as helping Liz around the house cleaning for the next 12 years.

When the couple moved on, they recommended Janet to the next sharemilkers so she carried on working for them for three seasons.

It was when those sharemilkers abruptly decided to leave six weeks before the 2019/20 season that the Committee of management (COM) decided to buy a herd and put a manager on instead.

“At this stage I had been working on the farm 13-14 years. I knew it well, so was offered the job of 2IC to help the new manager adjust.”

The new manager from the Waikato didn’t adjust easily to the Kikuyu grass system and then halfway through the season suffered health issues, so Janet stepped up as an interim manager for the rest of the season. When the manager resigned due to ongoing health issues, the COM offered Janet the role of manager.

“The farm adviser wanted to advertise for the role, but the committee said: “why? Janet has been doing the job for the last year.”

“I was in tears, I would have been happy to stay on as 2IC, but for them to put my name forward, I felt really humble. What an honour that was.

“Part of me was scared to take that leap, but I did it with a massive wrap-around support system. Them having that faith in me gave me the push to keep going and upskill myself more.”

Everything Janet has learnt has been through hands-on experience under the sharemilkers she has worked for. She reads a lot and watches videos on dairy farming.

The farm is also part of a DairyNZ cluster group which has helped her gain knowledge through networking with other farmers. Janet managed record production in her first year as manager, 140,000kg milksolids (MS) up from 125,000kg MS the year before. One of the biggest things she has learned since stepping up to manager is that every decision has a flow on effect.

Entering the Ahuwhenua Trophy competition in her first year as manager was another daunting prospect that Janet had to step up for.

“Public speaking was really intense. I didn’t want to look stupid. Most farm managers have a university qualification, I don’t have anything. I just have done the basic Milk Quality Level 1 and 2.”

Being named as a finalist and one of the top three Maori dairy farms was an awesome achievement, however, she says.

When it comes to Janet’s plans for the future, she says she only looks a few months ahead. She’s just enjoying life on the farm and learning more every day.