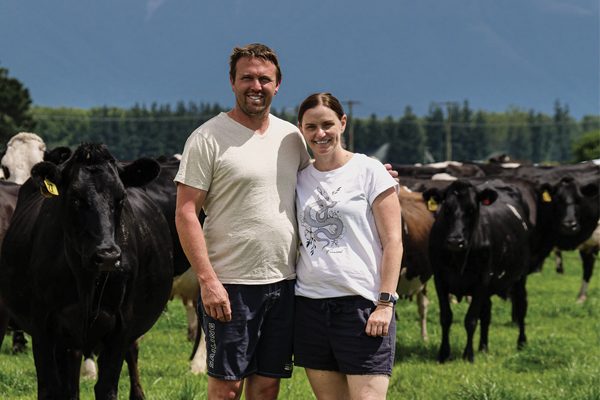 A shift to the South Island, contract milking, has led a couple to an equity management role, with the prospect of growing ownership. Anne Lee reports.

Flo and Jen Coetzee are finally catching their breath after a whirlwind couple of years that saw them go from contract milking 1000 cows to variable order sharemilking for a season and then take the big leap to equity management in an 1100-cow farming operation they now call home.

Eight months in and the couple say it really does feel like home.

Their equity partners in the company have made sure of that. 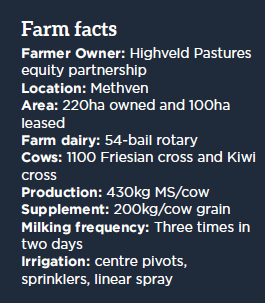 “As smaller shareholders in an equity partnership you get warned by everyone when you’re going into it,” Jen says.

“But we’ve all gone into this knowing what each other wants and knowing we want to grow,” Flo says.

That’s meant an increased voice for Flo on farm operational decisions and direction and first option for the couple to purchase 50% of any shares other shareholders put up for sale.

“We actually feel very safe in this partnership, with these people around us because for years it’s been just us two, on our own making decisions, dealing with the bank or suppliers,” Jen says.

Neither Flo nor Jen have family in farming and say they’re not really the sort of people who like to rattle anyone’s cage.

“We’re both quite passive by nature and I guess if we look back knowing what we do now we might have been more assertive when we were dealing with banks and suppliers and people like that.”

Flo is originally from South Africa and came to New Zealand in 2003 on a working holiday. He worked on dairy farms in the North Island and met Jen who is involved in medical research and sets up clinical trials. She works with district health boards and drug companies, negotiates contracts and budgets, and carries out the Medsafe and ethics approval processes.

“My Dad grew up on a dairy farm in South Taranaki but he didn’t become a dairy farmer himself,” she says.

In 2013 they decided a shift to the South Island would help move their dairying career along. Canterbury provided the larger herd sizes they were after and for Jen it meant they could be near a major airport so she could continue her work.

Their first season was managing 1000 cows for Dairy Holdings Limited (DHL) which was in itself a big jump from the 500-cow jobs Flo had been used to.

But the next step was even bigger.

“Going contract milking the next season was a massive learning curve,” Flo says.

Not only was he still coming to grips with managing irrigation and a large herd, the shift to contract milking also meant employing staff and running their own financials.

“It was a whole new world as a contract milker – employing staff was probably the biggest learning curve,” Flo says.

Being the boss was probably the hardest step for him. It took him a while before he was confident in dealing with tricky people situations at work.

“It’s something I’ve got a lot better at over the years. I don’t like conflict but I’ve got a bit firmer and it’s about good communication really,” he says.

A lot of issues could be headed off right at the recruitment stage, the couple says.

“Unless I’m looking for someone to fill a role like 2IC, I’m going to employ people on their attitude and their fit with the team.

“I can teach them what they need to know but you can’t teach them how to get on with people or attitude – not easily.

“We often recruit people through our existing staff,” he says.

“At the start it was harder because we didn’t really know what our rights were as employers or the processes you should go through when people weren’t working out.

Having employment contracts for staff, deciding what payroll system to use, what accountancy package – they were all new too.

“From a business perspective the paperwork was overwhelming to start with when you didn’t really know what you were doing – there was payroll every two weeks, monthly bill payments, coding invoices and paying GST.

“When we first started there wasn’t a system that imported your bank transactions, it was all a lot more manual.

“But the more you did it the easier all of that got,” Jen says.

Their advice to anyone starting out is to get help to start with.

Most online systems now have help desks where they can log into your computer and see your screen and that’s an enormous help, she says.

“We’ve used four different payroll systems over the years – I really loved PaySauce because it worked well with a dairy farm business where it’s not Monday to Friday.

“We’re using Smartly now because we run our payroll through Camden and that works well too. We’re also using Figured and Xero now with Camden, running our accounts through their office so I don’t have to spend as much time on the admin side anymore.”

Jen says they used Farm Focus – formerly Cash Manager, when they were doing their own accounts because it worked well for their farming business and quickly helped them see how they were tracking to budget.

Your accountant and other rural professionals can log into it to make sharing information easier too.

“I think that’s something you don’t realise at the start – just how important a good accountant can be.

“They see hundreds of accounts and they can quickly see if a cost area is a bit high or pick up on something you haven’t noticed.

“When you’re looking at jobs and going through a budget for a contract, they’re really valuable,” Flo says.

They say it’s important you have an accountant you feel comfortable doing that with, someone who makes themselves available and is prepared to take a good look at your situation and give you advice.

Bankers, too, should be part of the team but they’ve often found that without family connections and movement of bank staff it wasn’t easy to build that relationship.

When they started out contract milking they were able to get a loan of $150,000 to get the gear they needed.

They paid that back quickly and then each year took out another loan to buy stock – again each year paying debt right down.

They were disciplined with spending but also took a friend’s advice when they started out – “Don’t let it run you into the ground.

“So, we always made sure we had a break each year and we saved up and took holidays,” Jen says.

After six years they had 320 cows leased back into the herd and they decided it was time to have a crack at 50/50 sharemilking.

“That had always been our goal – we’d had a go at it a little earlier but we couldn’t get the finance and, in the end, it was lucky because that next season the payout crashed to $3.90/kg milksolids (MS).”

Flo says they gave notice in October 2019 they were leaving their contract milking job but then it was much tougher than they thought to find a 50/50 sharemilking job.

“We kept getting down to the last two or three at interviews or they’d want us to buy the cows on the farm so we’d have to sell ours to get the finance sorted and we were struggling to find buyers at the right price because it was getting late.

“It was pretty stressful and, in the end, we took a job variable order sharemilking and leased the cows out but then we went into lockdown so it made getting things sorted a bit harder.”

The pair say that while they had goals, they hadn’t written them down in a formal way and when they couldn’t make the 50/50 sharemilking step that probably contributed to them feeling a bit lost in where they were heading.

But then, their friends Glenn and Sarah started talking with them about equity management as part of plans they were trying to pull together.

“In the end that all came together really quickly and here we are,” she says.

“We did our due diligence and we were sure that if we were going to do this, these were the right people to be doing it with.”

The equity partnership has brought a whole new level of learning in terms of business structure and governance.

“We never really had a mentor as such but this feels like that now,” Flo says.

They’ve been watching and learning with farm business and board meetings structured with agendas and notes taken.

“We have the same mindset and values,” he says.

It’s been a tricky season to start the venture on but they’ve been realistic with budgets.

They’ve used a three in two milking schedule, due in part to long walks for cows and for the people side of the business.

It’s worked well and cows are on track to produce about 430kg MS/cow with about 200kg/cow of grain.

“We’ve made a fair bit of silage so we’ll look at our stocking rate for next season.

“We treat it like it’s our own but we’re not alone – we’ve got a great team to be in business with and that’s a good feeling.”

Check out Highveld Pastures at https://youtu.be/DXcvspYGA08