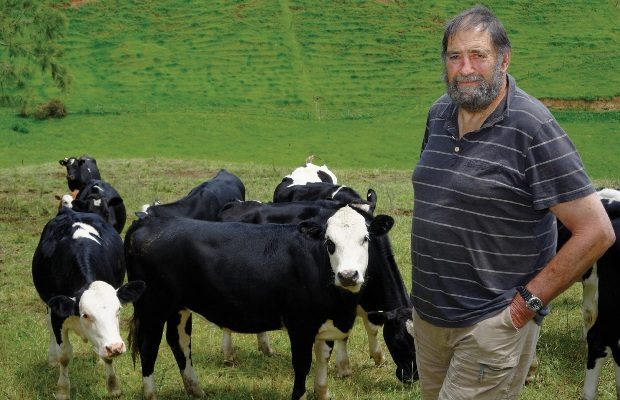 Brian (Hank) Hockings who contributed columns to the New Zealand Dairy Exporter for more than 20 years passed away at his home on November 15. He was 77.

Born in Gore, Southland, Brian went to Massey Agricultural College in 1960 with the intention of completing a Bachelor of Agricultural Science. He started on a rural field cadet scholarship but stayed with it for just one year, finishing his degree independently in 1965.

He then joined the Department of Agriculture as a farm advisory officer in Palmerston North and after part-time study received a post-graduate agricultural science diploma in 1968. In 1969-70 he spent a year in the United Kingdom as part of an exchange with the National Agricultural Advisory Service.

In 1973 he moved to Taranaki to head up the Ministry of Agriculture’s (MAF) advisory services in the province, becoming well known and highly regarded to many farmers Taranaki-wide. He was a must-hear speaker at annual open days at the Normanby Research Station. It was during this time he began writing his regular column, Letters from Stratford for the New Zealand Farmer.

Brian took voluntary redundancy during MAF’s reorganisation in 1988 and, wanting to stay in Taranaki, joined Moa Nui Dairy Company as its farm production manager. That position was disestablished when the company merged with Kiwi Dairy Company. He then became a self-employed farm consultant, valued by his many farmer clients for his down-to-earth and practical advice. He became semi-retired nine years ago.

Brian and wife Beth, also a consultant, planted kiwifruit on a smallholding near New Plymouth they bought in 1979. After exporting organic kiwifruit the plants were taken out and they ran some cattle.

Brian had a long involvement with the Stratford Demonstration Farm, being chairman for many years. In June 2017 he was one of four life members of its society on hand to cut a birthday cake at its centenary dinner. It is now leased to Dairy Trust Taranaki, carrying out a range of trials covering subjects such as different stocking rates, feeding strategies and fertiliser applications.

Brian started writing regular columns for the Dairy Exporter in the late 1990s when it was owned by the Dairy Board, becoming known to a much wider national audience, and providing much food for thought.

His articles had relevance to dairy farmers up and down the country and often provoked letters to the editor. He wasn’t afraid to enter debates such as whether to use supplements to fill feed gaps or rely on grass, and the timing of feed conservation. He continued to be a popular speaker at well-attended sessions at dairy farming conferences, larger than life in both stature and experience.

As a long-standing member of the Institute of Agricultural Science he contributed to a number of published papers.