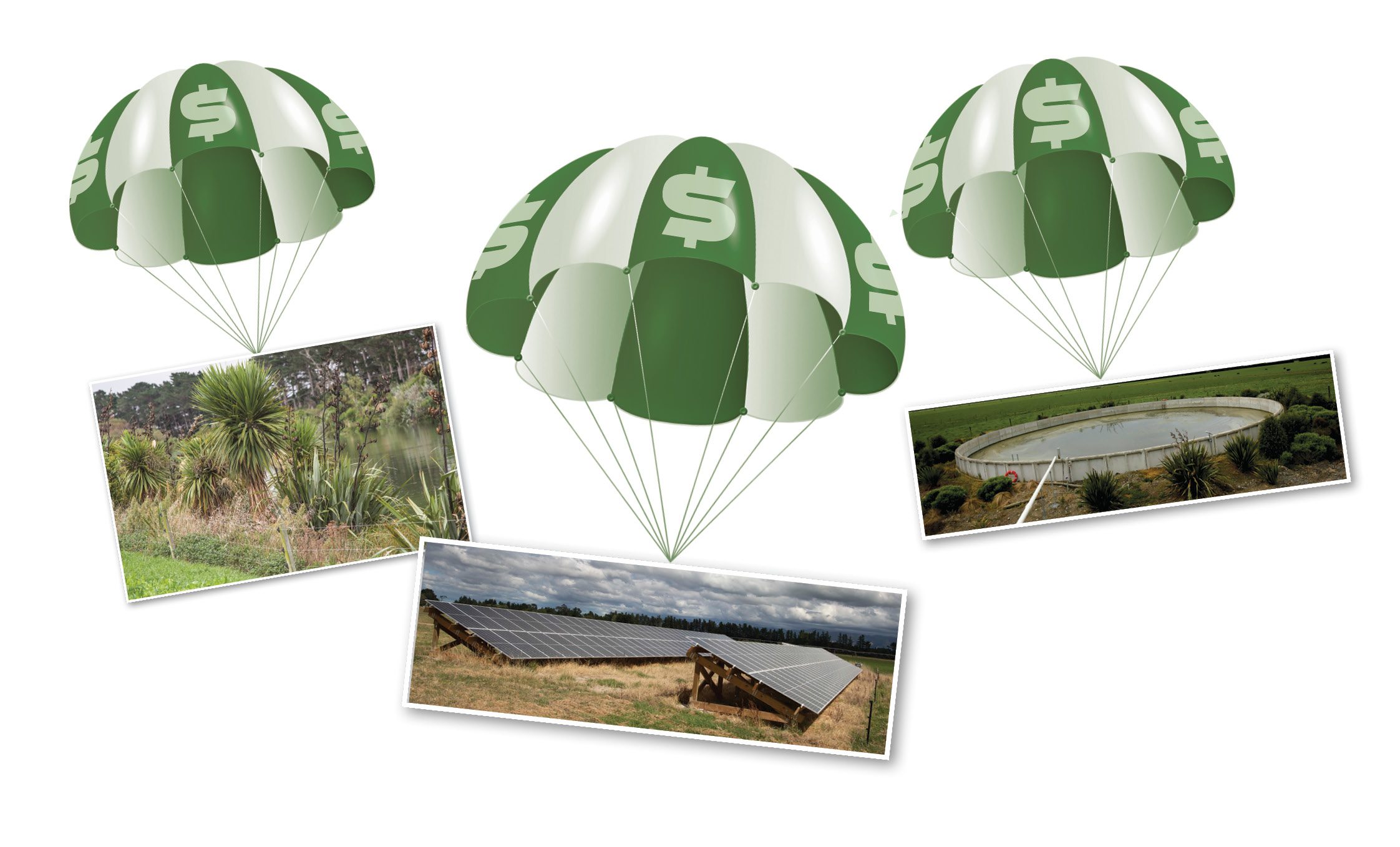 Rather than saying ‘so what’ to ethical investing, farmers need to be aware that banks will be taking this into account when assessing their
business. Phil Edmonds outlines what sustainable finance means for the dairy industry.

Over the past few months a growing list of New Zealand investment funds have announced changes to their strategies, with dedicated shifts towards socially and environmentally responsible investing. Among others, Mercer declared in April it would be divesting shares in companies including those involved in the most carbon intensive industries. At the same time the tool Mindful Money was being promoted to allow anyone to generate details on the ethical nature of their Kiwisaver investment, identifying those funding the bad stuff, including environmental violations.

Having scanned this passage and found no reference to agriculture, farmers might say ‘so what’. But the banks are also in this camp, which should give cause to read on. In the process of documenting the impact on the environment from their own investments, banks could well start to stare at farming-related assets that show fewer signs of holding their value, and more signs of damaging the banks reputation.

The NZ banks won’t be giving up on agriculture as a result of its environmental risks anytime soon. In fact, they are proactively developing a framework that will enable farmers to attract what has become known as sustainable finance. But the move to transparent investment reporting to meet the demands of ethical investors and now the government means the writing is on the wall for those doing it the old way.

The emergence of a more globally active ethical investor community can’t be blamed on Covid-19 (believe it or not) but it certainly has become more visible over the past year, tied inevitably to the growing groundswell of concern about climate change.

The picture of an ethical investor might well conjure up an individual with some disposable spare change buying a handful of shares in a company making sleeping bags out of old socks, rather than Rio Tinto. Don’t be fooled. Ethical investing is no longer discretionary. It is fast becoming conventional business practice.

A Rabobank paper published in late 2020 titled Cashing in on Sustainable Agriculture noted that large financial institutions are increasingly looking beyond traditional investment metrics to determine their viability, “and as a result are starting to actively divest investments that present a high sustainability-related risk.”

The private sector may have started this but regulation is on the way to support it. In mid-April the NZ Government introduced legislation that will require the financial sector to disclose the impacts of climate change on their business and explain how they will manage climate-related risks and opportunities. The Financial Sector (Climate-related Disclosure and Other Matters) Amendment Bill will make climate-related disclosures mandatory for around 200 organisations, including most listed issuers, large registered banks, licensed insurers and managers of investment schemes.

Climate Change Minister James Shaw said “Climate change will have a profound impact on businesses all over New Zealand. There are activities and assets that these businesses are involved in that will not hold their value in a low carbon world, simply because they emit too much climate pollution and contribute to the climate crisis.”

How might banks react with their carbon emitting rural portfolios in mind?

With so much skin in the game, banks have already been acting on option 2 by delivering targeted lending products to farmers wanting to make their farm operations more environmentally robust. As an example, ASB has a Rural Environmental Compliance Loan available designed specifically to help farmers manage their environmental compliance costs and get sustainability projects started such as effluent system upgrades, fencing off waterways or riparian planting. The loan can be up to $200,000 and repaid over five years with a ‘low’ interest rate. ANZ has a similar offering – a low interest Environment Loan for improving the environmental and economic sustainability, carrying out conservation projects and meeting local environmental bylaws. This loan can be for up to $300,000 and as with the ASB offer, repaid over five years.

This has proved to be an important first step but is largely business-as-usual lending, with these loans aimed at farmers who need a leg up to meet compliance. It is not sustainable finance, which involves funding a farming operation that will deliver changes beyond normal regulatory requirements, and crucially, is measured to help banks answer the government’s soon-to-be mandatory reporting requirements, and attract ethical investors.

So far, the growth in sustainable finance for the agriculture sector has been thwarted by structural barriers that have not been a problem in other sectors. For energy and transport for example, sustainable finance is well advanced as investors can clearly recognise tangible, defined and measurable outcomes (renewable energy, electric cars etc). For agriculture, outcomes have so far proved difficult to define without clear measurement techniques and an understanding of the impact agricultural practices have on the environment.

For example, there are as yet no proven tools available to report onfarm greenhouse gas (GHG) emissions to provide viable evidence of any impact. The absence of this technology makes it harder for investors to understand how their funding will make a tangible difference. And of course, agriculture has been out of the limelight (globally, if not in NZ) when it comes to an understanding of the big steps that need to be made in order to arrest climate change. Until recently, agriculture has not been on the radar of sustainable financiers.

In NZ, a start has been made – albeit in front of, rather than behind the farmgate. In 2019 ANZ signed a four-year partnership with Synlait to fund its sustainability agenda with a discounted interest rate based on its performance across a score of environmental, social and governance (ESG) measures (including land use, biodiversity, human capital, business ethics) that were to be independently assessed as part of the company’s own sustainability reporting.

In March this year, BNZ announced it had formed a partnership with Southern Pastures, which owns 20 dairy farms in Waikato and Canterbury, to deliver water and biodiversity benefits. Southern Pastures performance would be judged under an independently certified 10-star values programme that stipulates strict environmental, climatic, animal and human welfare requirements.

The latter initiative does involve action behind the farmgate, but the scale of the project has justified the use of an established measurement programme.

Alas, help is on the way to address the measurement challenge for all farmers with the development of a NZ taxonomy (set of base measurements) to define sustainable agriculture, and in so doing provide a more attractive proposition for potential investors.

Such a taxonomy already exists in Europe and requires landowners to show they are both meeting the minimum requirements (known as ‘do no significant harm’ safeguards) as well as demonstrating the substantial avoidance or reduction of GHG emissions from production practices.

The NZ version will be adopting a similar methodology as the European Union taxonomy, but our way of pastoral farming is different and that needs to be taken into account.

In a recent NZX-hosted explainer on sustainable finance, BNZ head of natural capital Dana Muir said “In New Zealand we have a unique set of skills and practices that are very different from the rest of the world, and we need to acknowledge that from a finance point of view if we are going to bring out any tool to support farmers as they go through this process.”

“The NZ banks won’t be giving up on agriculture as a result of its environmental risks anytime soon. In fact, they are proactively developing a framework that will enable farmers to attract what has become known as sustainable finance.”

A leadership group including ASB, ANZ, Westpac, BNZ, Rabobank and MPI is working with the Ministry for the Environment to achieve international recognition for a standard for use by the finance sector in considering agriculture lending and investment.

The Sustainable Agriculture Finance Initiative (SAFI) will be aligned with emerging international frameworks (including the EU Taxonomy and Climate Bonds Standard) and importantly, existing sustainability standards used by New Zealand growers and farmers.

Rabobank’s Blake Holgate says “the Framework or structure will be based on standards you have to meet. But climate adaption measurement will be very much aligned to NZ and consistent with the work being undertaken by He Waka Eke Noa (Primary Sector Climate Action Partnership). A lot has been done to bring the standard into line with work already underway, whether it is at milk processor level or standards set under the Farm Assurance Plus verification programme. The industry doesn’t want a whole lot of new standards they need to comply with.”

Details on the framework will be released in the near future, but ahead of those details, farmers can expect to be able to consider two different means of evidencing environmental progress – either though a successful project outcome, or by showing the adoption of good practice. Blake says “The latter will recognise farmers who have been doing the right thing, because it gets harder to show outcomes the more you achieve reductions. For those starting from scratch it will be easier to focus on reductions.”

So in a nutshell that’s the theory. Back to the practice – does this emergence of sustainable finance mean it is going to become the norm, where all rural lending will be tagged to measured environmental improvement?

Not necessarily but inevitably yes, might be an honest appraisal.

This was reiterated by Dana Muir. “BNZ has always rated customers on their non-financial management, questioning how they manage their environment… customers will start to see more and more of this because we do see it as a risk, as well as an opportunity to help build sustainable businesses.”

ANZ rural economist Susan Kilsby echoed this, which reflects the sector’s wider view. “Going forward, whether it’s banking or price you get paid for your

milk or meat, those who are doing a good job and farming in an environmentally sustainable way will be rewarded, and those who are not, it will get tougher and tougher from all angles – not just regulatory. There will be more differentials in pricing – eventually to the interest rate you get charged.”

If this sounds threatening, it is not the message that the banks are wanting to send. They see the emergence of sustainable finance as a huge opportunity for New Zealand’s primary sector.

Blake Holgate says he’s not aware of any other country that is developing these initiatives for sole operators behind the farmgate.

There are examples overseas where processors are being rewarded, but nowhere else to any significant extent are farmers being given this direct opportunity to benefit financially from their work to operate more environmentally.

Dana Muir is unequivocally enthusiastic. “This will be a huge opportunity. Finance has been a missing piece in telling the traceability story. With the new SAFI framework, we will be able to finally say that compared to the rest of the world, this is how sustainable we are.”