Brent Boyce of FarmWise, Nelson/Marlborough looks at the continuing evolution of milking frequency.

The article published on milking frequency in February/March this year is generating a large swell of interest that is not abating.

It is getting to the time of year where farmers are considering their summer milking regimes over the hotter months. Many farmers are also looking at opportunities to change rosters to better suit families and festivities. This revised article is a chance to refresh our thinking going into summer.

Our old favourites of milking frequency have mainly been twice-a-day (2AD); once-a-day (OAD); and to a lesser extent three-in-two (3-in-2). These regimes have always been somewhat inflexible, and the search has been ongoing for years for easier ways.

Steve Davis of LIC’s R&D Division presented a paper on Optimising Milking Frequency in February 2018 to the FarmWise team. In it he highlighted that cells in the udder take more than seven days to die; and that losses on OAD can be minimised if those cows could be milked 2AD just twice a week. That presentation has sown the seed.

The reality is that we work in a seven-day a week industry; but we live in a weekend-based society. It is often hard to maintain a work/life compatibility between the two for both employers and employees. 3-in-2 milking is 10.5 milkings/week, and a skewed weekend roster. OAD milking (with just seven milkings a week) is an obvious option to better manage work/life expectations.

However, not all farming businesses wish to adopt OAD (for many and varied reasons) – 2AD milking still involves 14 milkings a week and exacerbates the work/life conundrum.

Options for mid to late lactation

There is enough anecdotal farmer evidence already existing to show that if cows are being fed the same as 2AD, they will produce the same (as 2AD) on 3-in-2 (10.5 vs 14 milkings/week) after four months of lactation. But then the weekend evenings get messy.

However, instead of going to 3-in-2 at say your normal Christmas time; you went to 10-in-7 then instead? You take out just half a milking every seven days. In a fortnight you would do 20 milkings on 10-in-7; versus the 21 on the traditional 3-in-2. It may not seem like much, but there is a subtle difference. In comparison, your working week would then potentially look like this:

Basically everything stays the same – but suddenly you have become “weekend-centric” in your milking frequency. You now milk 2AD on three days a week (Mon, Wed, Fri); and OAD four days a week (Tue, Thu, Sat, Sun). By dropping from 21 milkings on 3-in-2 down to 20 milkings a fortnight on 10-in-7 – you can plan stable weekends. Just by removing that one single milking.

Data collected from this last season’s lactations here in the Top of the South is showing no significant change in comparison to what they normally achieved when starting on 3-in-2 around the Christmas period (for either production or SCC). And those farmers are rearing to do it again this season. A point to remember here on 10- in-7 – this is three milkings a week on 2AD. Steve Davis had shown 9-in-7 is possible, so…

In mid-March you might stay on 3-in-2 to the end or may even go on OAD for the last month or two. What about trying 9-in-7 instead? There are 2 more milkings than OAD – the increased frequency of milking can maintain a higher milk harvest. Steve Davis has the first data on this, and it has been backed up with the farmer observations to date. 9-in-7 is better for both cow’s productivity and SCC than OAD (and it is better than 3-in-2 and even 10-in-7 for staff). To do 9-in-7, simply milk 2AD on say Monday and Thursday, and the remaining days are OAD: 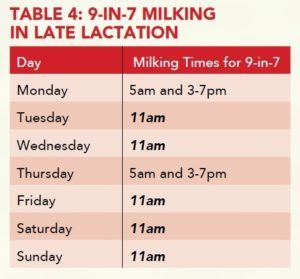 It should be noted that the milking times in the previous tables are purely indicative. You may decide to milk earlier or later and have shorter or longer gaps. Milking times for each day can be quite flexible – there are no set rules. At present these are farmer observations, awaiting the science. Possible best-known practice at present is:

What Table 5 shows is that even in late lactation, there is usually some losses compared to 2AD even if going to OAD in say April. We know that using 3-in-2 and its varied hours works. Using 10-in-7 and 9-in-7 does extend times between milkings over the weekend etc; so it is important to try and time the milkings equidistant between each milking (halfway).

The above discussion gives us some good options for the summer period from mid-lactation. But, our crunch time for people is typically in the first half of lactation. Is there anything we can do there?

Options for early lactation and the festive period

And you could do the same in a tough spring (or a crunch time on farm) – you could say “righto – on Sunday we milk just once”? We know from Table 5 that if we did have a 19-hour gap (like the above scenario); there would be some minor loss. How much would that drop be? Likely minimal. We do know the cows will bounce straight back (when fed properly), and that any change in SCC would be a small “blip”. Remember – it takes at least seven days for udder cell tissue to die. 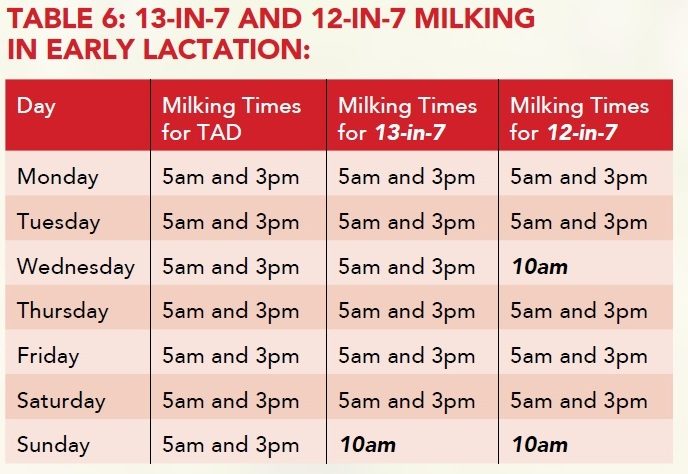 Essentially you have just milked 13-in-7. A small number of farmers have done this – and it seems quite okay. The more who try it, the more information and confidence we will have. The question would then be, if Sunday or Christmas Day OAD works – could we then do say a Wednesday as well and even have 12-in-7? We don’t have enough information to recommend everyone doing this yet – or what is 100% best practice. There are people doing this now – and most responses are very positive – these early adopters are learning lessons for all of us. Most dairy surveys indicate it is the lack of structured time off that makes our industry less attractive. It is critical that we try to improve our work/life balance. If we could do this with minimal or limited productivity or profitability losses, and better retain staff it would be a great result. There is no doubt that our cows are incredibly flexible. We need to be as well. At present we are limited only by our imagination.

DairyNZ’s research on 3-in-2 and varied milking frequency is now well underway. It is based at the LURDF, with Doctors Paul Edwards, Jane Kay et.al. The information from the trials is now available via the DairyNZ website.

So, how few can we do? No-one knows yet – but we are rapidly gaining knowledge as more people jump on board. It is a great opportunity for our industry to evolve its work/ life balance, and to really attract and retain quality staff. We have the potential to make employment opportunities in our industry a lot more mainstream. So – be brave – have a go; and enjoy your summer.