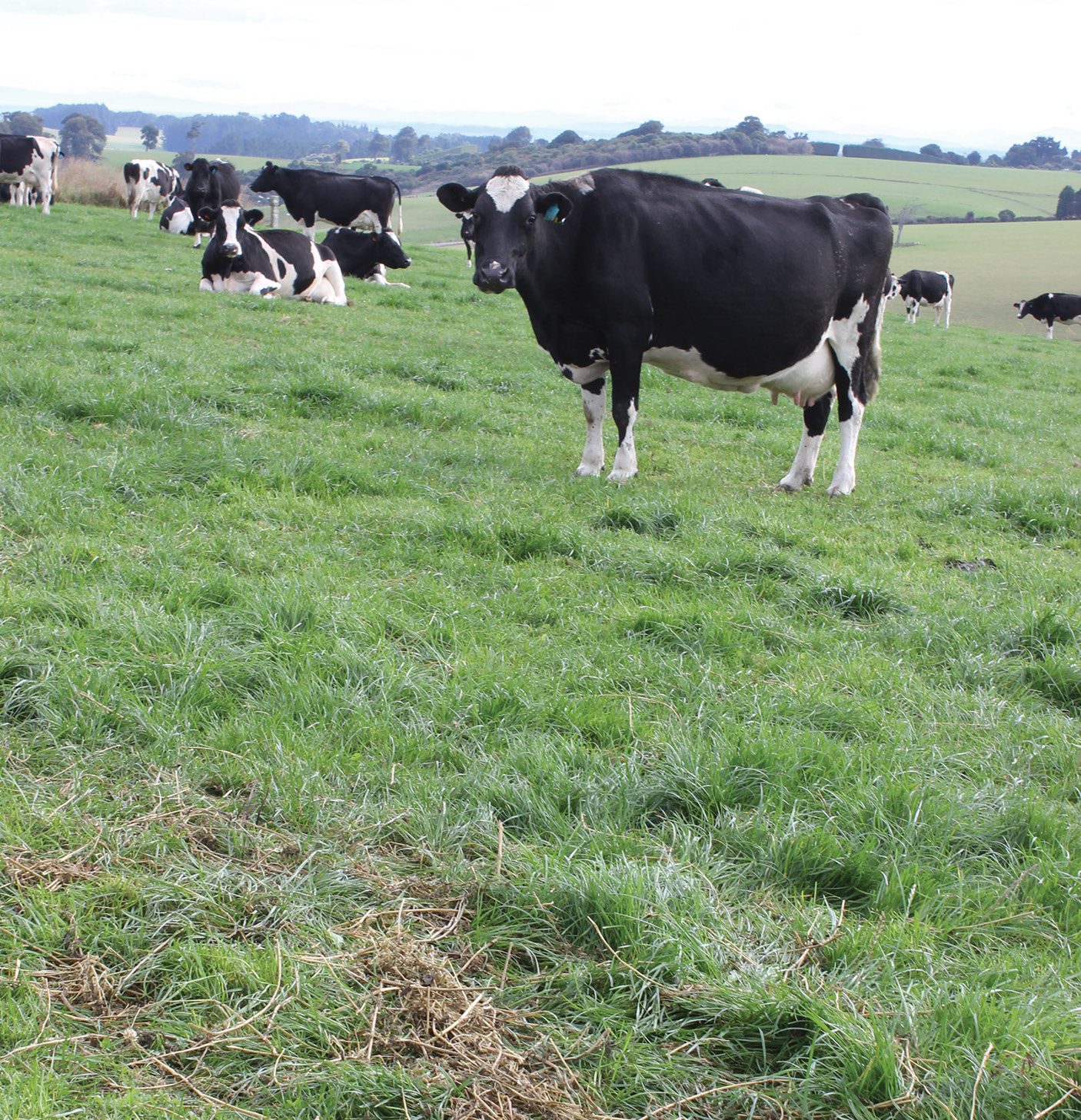 The success of a switch to lucerne featured at Southland’s second only SMASH (Smaller Milk and Supply Herds) field day. Story and photos by Karen Trebilcock.

Lucerne has successfully replaced summer turnips on a Southland dairy farm, providing the feed needed in the midst of the autumn drought.

“After Christmas, our covers were down at 2300kg drymatter (DM)/ha,” farm manager Michael Kiernan said at the region’s second only SMASH (Smaller Milk and Supply Herds) field day at the start of May.

“There was no rain in the forecast and I think we bottomed out at 1600 cover. Every time we did get some rain it blew a gale and it was gone.”

They started feeding out their lucerne balage, cut on three and half hectares on the runoff, and the cows ran to eat it.

“It’s the first thing they go for. They eat it instead of the grass,” Michael said.

“With summer turnips, when they grow well we didn’t need them because we had enough grass and the seasons we did need them they were no good,” farm owner Dean Rabbidge said.

“And it was always a problem to get those paddocks back into grass because of the time of year.”

So in autumn 2020 they sowed lucerne as a trial and this season will get four cuts off it – about 11T DM for the year.

It’s double wrapped as balage, just in case they don’t need it until another season.

“This year I don’t think it hardly had the plastic on it,” Dean said.

They’ve worked out it costs them about 25c/kg DM, not bad when grass balage is currently getting freighted from Canterbury at $65/bale just for transport.

Their only problem is the winter weed spray lucerne needs if conditions get too wet to get gear on the paddock.

When it runs out in a couple of years, Dean and Michael are thinking of increasing the hectares so they don’t have to feed so much grain in the dairy.

Covers on the Wyndham farm in early May were at 1860kgDM/ha, still far too low for the time of year even though day temperatures were still hovering in the high teens.

“We put 95kg/ha of urea on in April with the rain we got then and that really changed things. Last week we grew 30kg DM/ha a day and this week we’ve grown 42kg.”

The 68ha dairy platform running 174 cows is part of an extensive sheep farming operation over multiple blocks. Dean converted it in 2011 as a way to buy into his parents’ sheep and beef operation and after four years was glad to hand it over to Michael from Ireland.

“I very reluctantly get roped into milking once or twice a year now,” Dean said.

“There are efficiencies with the sheep operation and the different classes of stock do line up at different times of the year. When there is an excess of grass on the sheep farm we can put it into the cows. And equipment is shared across the two.”

The conversion was done with the aim to later grow the number of cows – the tracks are six metres wide and the herringbone dairy has 24 sets of cups. However recent changes in regulations have stopped any increase in cow numbers.

“We just have to grin and bear it,” Dean said.

Although the ground was solid underfoot in early May, the farm can get wet so cows are wintered off at graziers near Balfour.

“We always dry off 20 May. You can ruin the whole spring in one week by trying to milk to the end of May.”

“It’s nice at the moment,” Michael said, “but it can flip very quickly. The only shelter we have from the south is the Tiwai chimney.”

Another tool they’ve used to combat the dry conditions is switching from twice-a-day to ten-in-seven milkings.

“We thought about three-in-two but it just did my head in having to go through the calendar figuring out which days we were milking twice a day and which we were milking once a day,” Michael said.

“With ten-in-seven, every week is the same which works for all of us.”

Ten-in-seven milking is milking twice a day on Mondays, Wednesdays and Fridays, and once a day on the others including in the weekend.

“It took the cows about a week to adjust and the somatic cells spiked but then everything settled down,” Michael said.

“It’s certainly put the condition on the cows.

“There were times before we changed that they didn’t really want to come into milking in the afternoon but now they want to.”

He also credits the system for keeping their relief milker.

“She reared the calves for us then we offered her some milking time but she wasn’t keen to milk twice a day so ten in seven works really well for her and she’s stayed.”

DairyNZ senior scientist Paul Edwards of Lincoln said at the field day farmers were finding reduced milking frequencies a business saver with the lack of dairying staff in the country.

“It’s working on large corporate farms as well as smaller, owner-operated ones,” he said.

“It also means a whole group of people who have to structure their day around school times are available to milk cows in the middle of the day.”

Further trial work was still to show the effect on milk production but there were other trade offs such as increased cow condition, better fertility, staff gaining more sleep time and savings on plant costs, he said. One farmer at the field day pointed out dairy farmers were there because they liked milking cows which caused some laughter among the 40 people there.

“We’re 10,000 people short in the dairy industry,” Paul replied. “Something has got to change.”