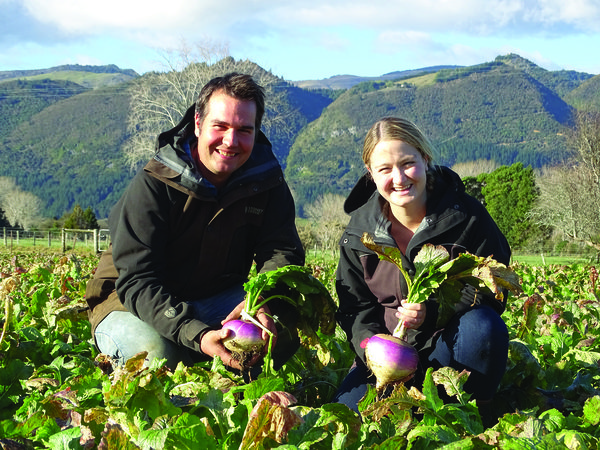 Lambing triplet-bearing ewes under cover when the weather is rough and bringing them all in to ensure mothers have enough milk achieves a triplet survival rate of 275% for Golden Bay farmers, Ben Lovell and Jennifer (Jen) Cooper.

Spring is intense by the time they take a lamb off about half the 200-ewe triplet mob to mother on to ewes with singles, plus take on 40 four-day-old calves and break feed stock, but their intensive strategy is making the 150-hectare farm hum.

For 2017, the farm earned $794/ha before interest and tax, compared with benchmark figures for South Island intensive finishing farms of $529/ha and their aim is to make the top 5% in New Zealand.

It’s only their second year on the farm which they lease from Ben’s mother and stepfather, Jane and Gavin. As a younger generation keen to make their own stamp on the farm, they’ve planted crops and lifted stocking rates so that they are now running 18su/ha with plans to add another 200 ewes into the system next year. Ben is 32 years old, Jen who is due to give birth in mid-October, is 31.

To date they run 1000 composite ewes, 350 hoggets, 70 Hereford breeding cows, 70 beef calves from those cows and 80 dairy-beef cross youngsters. While 40 of those dairy beef are bought in as four-day-old calves, the other 40 are bought as weaned 100kg calves between eight and 12 weeks old. It allows them to stagger their work load through spring and pay less for young stock to ensure greater profit.

Their move back to the family farm just south of Takaka follows Ben’s big OE which turned into a seven-year stint in England. He’d previously worked on a couple of South Island stations, then completed a Bachelor of Commerce at Lincoln before his itchy feet landed him with an indoor lambing job in the south of England. He settled into a routine of seasonal work each year that included lambing, shearing and harvesting, culminating in “somewhere to hunker down for winter” and starting the cycle again.

Jen was an accountant in Manchester when Ben took up work on her family’s farm and the couple soon discovered that it made financial sense to buy a house they could improve with their DIY skills, rather than pay rent.

“We’d buy a house, start doing it up and half way through we’d move into it and continue doing it up around us which was pretty horrible,” Ben remembers.

But it was worth it and then the opportunity arose to return to NZ and lease the home farm, so Ben had to convince Jen to move to what she initially thought was the “back of beyond”. Instead, she discovered a region of sun, golden beaches and plenty of cafes.

The farm lies beside the highway which is the only route in and out of Golden Bay and they are surrounded by dairy farms, making a sheep farm a rarity. Apart from 13ha of rolling hill country, the farm is dead flat on stony loam soils which is “fantastic” in winter, but dries out fast in summer because of its free-draining nature. For that reason, they focus on growing crops to build a feed bank for the summer dry.

Chicory is the main summer crop which powers the lamb finishing.

It is essentially grown to finish 50-60% of the lambs before Christmas and get them off to the works, with the remainder finished on it by March 1.

Lambs sent off the ewes average 18kg carcaseweight (CW), while weaned lambs that graze on through the summer reach about 20kg. At between $400 and $500/ha to sow paddocks of chicory, Ben says the crop is well worth it and if the lambs don’t need it, other stock will benefit.

Straight chicory crops provide four to five grazings through the season, with mobs of 250 to 300 lambs at a time put on three-day blocks that result in a 25 to 30-day round. In that time, lambs gain between 250 and 300g day with the goal to put on 10kg liveweight a month and Ben says the drier the season, the better the lambs do on the chicory.

This past season, 5ha of chicory finished 800 lambs, with a lighter mob coming on to it as the previous mob is finished and sent to the works.

“At weaning we weigh everything down to 2kg lots with the aim of getting them up to 40kg liveweight. The Texels will do over 50% yield on mum and once they’re weaned they won’t drop below 47%.”

Plantain is also used with chicory and they’ve also been planting between five and 10ha of Tonic plantain with clovers for lambing ewes in spring, which Ben says will last for three years. It won’t last well into the dry, but he says it gets the ewes milking well and the lambs growing.

For the cattle, they sow 9.3ha in turnips that will winter 150 rising one year olds, which then go on to mixes of Italian ryegrass with some plantain and clovers that have been worthwhile for putting weight on the youngsters when they come off the turnips.

These pastures also bounce back after being grazed and gives them three to four grazings through winter, despite good frosts, then provide fast-growing, good-quality feed for finishing cattle through summer and autumn. All the young cattle are finished by June 1 the following year at about 300kg CW.

“I just love the Italian ryegrass here – you get so much off it .”

They break feed on grass (in spring) until it starts to get away. They try to get as much weight on stock as possible. If they need to quit them early, they have weight on the lambs to sell them to the works or as good stores.

“It gives us options and I never lay in bed worrying about too much feed.”

Feed is only part of the equation to make the farm profitable though and high-fertility ewes combined with good survival rates gives them the numbers to finish. Their composite ewes are made up of 3/8 Texel genes, 3/8 Finn and 1/4 Romney with breeding rams put over 400 of the ewes and Texel rams over the remainder.

The ewes scan high, reaching 198% for the mixed-age ewes this year and 180% for the two tooths to give a combined scan of 194%. For the past two years they have achieved 174% at lambing, despite a “West Coast” climate that can easily deliver 40mm of rain an hour and flat paddocks with little natural shelter.

“Surprisingly, we don’t lose a lot to exposure. They’re very easy lambing and big lambs – two good twins can be 3.5kg and 4kg – and the ewes are very calm. We also use a lot of woollen covers and reuse them.” 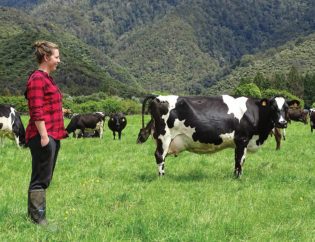 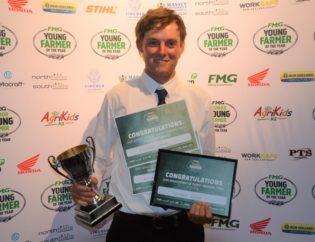 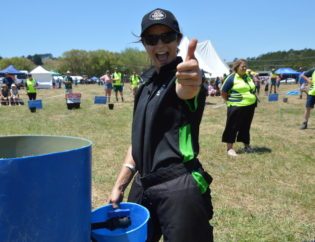 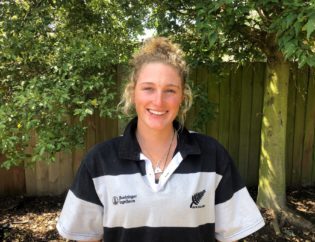