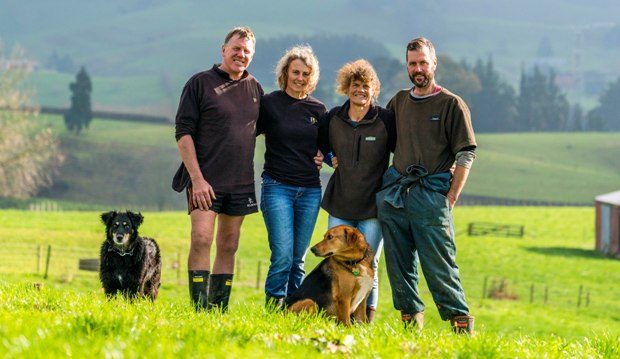 Best friends Pete Morgan and Ann Bouma, and Peter and Jenny Sinclair have gone from being sole owner-operators of their own dairy farms to entering an equity partnership. They told Sheryl Brown why they decided to go into business together and how the move has given them more freedom and balance in their lives.

Financial strength from joining equity has been a bonus of a South Waikato equity partnership, but the real measure of success runs a lot deeper.

Pete Morgan and Ann Bouma, together with Peter and Jenny Sinclair, are in their second season farming together in an equity partnership.

The couples met when they were neighbours 20 years ago and have remained strong friends since.

They had often talked about a joint venture and when Peter and Jenny went to sell their 83-hectare farm at Wharepapa South two years ago, Pete and Ann were looking for new staff and the timing was opportune.

Peter and Jenny bought a 25% share of Morlands Ltd, which Pete and Ann already had set up, and own the remaining 75%.

Although the two couples do not have equal financial shares in the partnership, they have equal say.

Ruling with the fist of a majority share wasn’t going to work for their situation, Pete says.

“We knew it wouldn’t work if we didn’t. We knew whatever the percentage split was we would have even say on things, that’s critical because it shapes our whole relationship.”

That showed a huge generosity of spirit from Pete and Ann, which reflects the people they are and their friendship, Peter and Jenny say.

“We really respect what Pete and Ann have done for us, as 25% shareholders, they totally respect our opinions and in decision making.”

For Peter and Jenny the joint venture has helped them grow financially, while for Pete and Ann it has given them more stability with staffing.

“It’s got to benefit all of us, we see each other as family. We want to work together and enjoy each other’s company,” Peter says.

When the couples seriously started considering a partnership they put all their values and goals on the table and found they were very similar.

They have always been on the same page when it came to farming values and philosophies and realised their goals were also in sync.

Many equity partnerships have failed because the parties were not on the same page when it came to the underlying values or plans, Pete says.

There is a lot of negativity surrounding equity partnerships, for good reason, he says. Equity partnerships are easy to set up and investors will flock in, but it’s about doing the hard work up front to prevent fallouts down the track.

Peter and Jenny had previously been in an equity partnership that didn’t work out, so they knew first-hand the importance of laying out expectations at the beginning.

“You really have to do your homework, and ask all the gnarly questions of each other,” Peter says.

“With Pete and Ann we had our courageous conversations at the start, we talked about the hard stuff. If my leg falls off and I can’t work on the farm – what will happen? You’ve got to think of all the scenarios.”

The couples spent a huge amount of time doing due diligence and writing up the agreement. Each couple was assigned an investor in an equity partnership to go to speak to and came back to the table with pros and cons.

They picked out the best bits and came up with their own agreement and strategies for managing their partnership.

A lot of their business and onfarm decisions are driven by their underlying values and farming ethos.

‘We knew whatever the percentage split was we would have even say on things, that’s critical because it shapes our whole relationship.’

The couples have a shared farming ethos to ‘keep it simple’. They are a pasture-based system, with minimum machinery and have strong values when it comes to being proactive on environment and animal welfare.

For example, the farm is part of the Waipa and Puniu River catchments so investing in fencing and riparian planting is important to both couples.

“We all acknowledge we are only caretakers of this land while we are here, so the desire is to leave this land better than we found it,” Peter says.

“It’s about farming for the greater good for Morlands and the land – that answers a lot of decisions, that’s the trump card.”

Those values and principles formed the template of their equity partnership and they created a strategy and structure to support that.

If a decision needs to be made, whether it’s to buy a new digger, trial a new crop, spend money on riparian planting, or buy in extra supplement, the four of them discuss it and make the decision together. The decision must be justified using science, facts and financial incentive, and it must fit their values and ethos for the business.

If they can’t agree, the foursome usually give the overriding decision to the lead person in the subject area. They all have their own strengths. Ann is the vet and chief financial officer; Pete and Peter are co farm managers and Jenny leads on the environment and compliance such as health and safety.

Ann, who is in charge of the budget, usually has the last word on big purchases. Pete and Peter joke that they are still trying to convince Ann they should buy a new digger.

They have made an allowance in the agreement to bring in an independent party if the four can’t reach an agreement at any stage.

The most important driver is to protect their friendship along with their business, Pete says.

“You’ve got to choose the right person, but you’ve also got to be willing to compromise.

“We don’t want to compromise our friendship, so you sometimes have to back down for the good of the relationship.”

The key is listening to what everyone has to say and even if you don’t agree with the result, you support the majority.

“It was always going to be a challenge having two different couples who have owned their own farms, being their own bosses, but it’s been refreshing,” Peter says.

Peter and Pete have relished being able to work alongside each other and they get excited about farm projects. They’ve remembered why they love dairy farming and farming has become an adventure again.

Pete and Peter as co-managers of the farms have two full-time farm assistants, and one part-time assistant. Ann is the on-call veterinarian and both Ann and Jenny are onhand during spring.

They had weekly meetings during their first six months, but now have director meetings monthly, and take minutes.

They are focused on keeping it professional because their motivation is trying to maximise profitability, Pete says.

The four are paid an individual salary and dividends paid proportionally to their shares.

Being in business with people they can trust has given the two couples more freedom to get off-farm and enjoy a better work/life balance.

Pete and Jenny both teach at Dairy Training Ltd and Jenny is part of the DairyNZ Environmental Leaders Group.

They don’t have to make as many compromises between personal interests, family time and the farm.

They can now go on holiday without working twice as hard the week before to get ahead of jobs and they don’t have to stress about staff while they’re away because the other couple are around, Jenny says.

When it comes to succession plans, the couples have their own individual family succession plans. Regarding Morlands they are open to other investors buying shares in the future if they fit the template.

Every three years the land and assets will be valued, and the shareholding will be discussed, giving Peter and Jenny or future investors the option to purchase more shares.

Their equity partnership could be a good model for other Kiwis at the end or start of their farming careers if people are motivated to make it work the couples say.

“This could absolutely work for people if they do the hard yards beforehand. Most equity partnerships are easy to set up and the hard work comes later,” Pete says.

If people compromise, leave their ego at the door and make sure they’re on the same page it can work in everyone’s favour.

Pete and Ann have been farming at Pokuru for the last 20 years. Ann’s family farm included 115ha and 10ha lease. The couple then bought a further 27ha in 2006 and the 45ha block with a second herringbone dairy in 2013. For the last couple of seasons the cows have been block-grazed and milked in whichever farm dairy was closest.

The 65ha they purchased last season backs onto the 45ha, so this season the cows will be split into two herds across the two milking platforms and the two farm dairies will be running year-round.

This season there will be extra costs associated with fencing off the new block’s river banks and riparian planting and constructing 100m of new track to connect the properties.

The paddocks on the new farm need to be redone and an extension of the effluent irrigation will be done this summer.

The wages figure is high because the couples pay themselves a good wage instead of taking drawings, this includes the management wage. This increases the apparent farm working expenses, which they usually aim to keep under $3/kg MS when not taking wages into account.