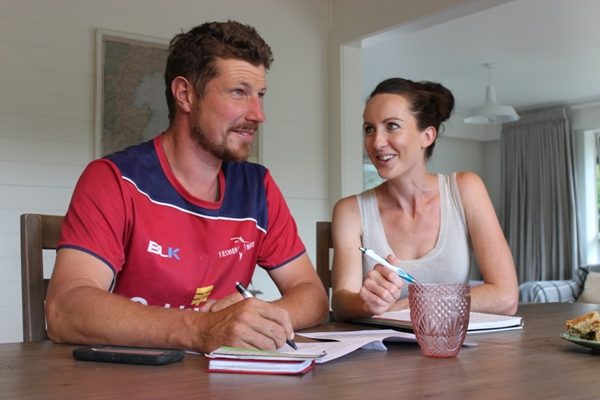 Okohua farm has been in Street family ownership for 111 years. Mike Bland reports.

Cows must work hard to hold their place on the Street family’s Okohua Farm. There’s no room for slackers.

Okohua, west of Taumarunui, is owned by Graeme and Glenda Street and run in conjunction with their son Nick, a former rural banker, and his wife Jo.

The original 465-hectare block was settled by Graeme’s great grandfather in 1908. Subsequent generations have added more land, the most recent being 376ha bought in April 2016.

For management purposes the 1325ha (effective) rolling to steep property is split into two main blocks. Nick Street looks after the ‘top end’ of the farm, which includes the new block and comprises most of the finishing contour, and Peter Birkett manages the breeding block. Graeme oversees the operation and also runs 125ha (eff) Hikumutu, a nearby block south of Taumarunui, used mostly for terminal trading stock. Shepherd Hamish Neal completes the team, with casual labour employed for docking and crutching, and contractors brought in for shearing and new fencing.

‘To be able to finish more lambs we have to accept a slightly lower per head price for our steers and heifers than if we finished them. But we are actually finding the returns per kilogram of drymatter consumed are higher for store cattle than for finishing stock.’

Rising from 160 metres above sea level to 550m, Okohua has about 300ha of easy-rolling contour, 490ha is medium hill and 660ha is steep. The balance is in forestry, native bush, bluffs and gullies.

The farm ran a traditional Angus herd until about 35 years ago when Graeme and Glenda started crossbreeding with Herefords, using Simmental as a terminal sire.

Over the last 10 years the Streets have focussed on straight Angus.

“We went back to the Angus because we wanted to simplify the system and capitalise on the benefits of AngusPure, even though we sell most stock store,” Graeme says.

Now the herd is predominantly Angus again, though the Hereford influence is still apparent in some of the whiteface cows.

“We couldn’t farm this place without cows. Our feed growth in summer is prolific, so we need those cows to groom pastures for the sheep.”

The Streets started mating heifers about 20 years ago and Graeme says this was a big step forward for the operation because it meant more calves on the ground.

One-year heifers are now mated from December 15 at a minimum of 330kg liveweight and the cows are mated from January 15. Typically the dry rate is about 8-10% in the heifers and 6-8% in the cows.

“I’d like to think that was good management,” Nick says, “but the reality is we had a very good growing season.”

Graeme says the store cattle policy is a good fit for the farm, given the limited area of finishing contour and the priority on getting lambs away at good weights.

“Because the progeny are Angus, we always get that premium in the store price.”

Nick says they have managed to strike a good balance when it comes to store cattle returns.

“To be able to finish more lambs we have to accept a slightly lower per head price for our steers and heifers than if we finished them. But we are actually finding the returns per kilogram of drymatter consumed are higher for store cattle than for finishing stock.”

Steers sold store this season averaged $1350/head. In comparison, a handful of Angus steers and bulls killed in early March were finished at $1250 and $1450 respectively.

“Based on this, the store steers returned about 26c/kg DM and the finished bulls and steers made 16c/kg DM.”

Analysing returns on a drymatter consumed basis gives Nick a good indication of how efficiently each class of stock converts pasture to product.

“While it’s the final per head price that pays the bills, feed conversion efficiency is a very important factor for us.”

All store steers are typically sold by November 25, but this season the Streets kept 60 over summer because they had surplus feed on the lamb finishing country. These steers were sold forward-store at 470kg on Feb 20, adding an extra 100kg LW at $3.00/kg.

Graeme says the store cattle policy gives flexibility. If feed is tight, cattle can be offloaded earlier. If growing conditions are good, steers can be carried to higher weights. All store cattle are sold on-farm through two livestock agents.

About two-thirds of the steers have been bought by the same buyer over the last three years.

Steer and heifer calves are run on the finishing block, which is well-reticulated and has an average paddock size of 2-3ha.

Lambs get the pick of the contour until they are sold, with most gone by late March. Steer and heifer calves get preferential treatment from then on.

Steers are run in mobs of 50-60, according to weight, and rotated around the finishing contour on 2.5 day shifts.

About 30 bales of baleage may be fed during the six-week pinch in winter and sometimes low rates of nitrogen are applied to the first-calver country. Otherwise, cattle are run on a grass-only diet, mostly on original pastures.

Nick says there might be an opportunity to do some cropping in future, but only if the economics add up.

“If heifers are too heavy we can slow down the rotation and offer more feed to the steers,” Graeme says.

Steers achieve an average liveweight gain of 0.95kg/day up until sale, and heifers average 0.85kg/day.

Graeme and Nick are happy with the weights achieved by the steers and surplus heifers, but they are always looking for new ways to increase income.

“This year we may look to leave some of the male calves entire and sell them into the dairy market in late Spring. We’ve got the type of genetics that dairy farmers want and if we can get $1800 for a bull we will more than double our returns per kg of drymatter,” Nick says.

Okohua’s Angus herd could be considered the farm’s forward pack – the cows do all the hard yards but the backline – the high-performance sheep flock gets much of the glory. Nick Street says this is because the sheep, which make up about two-thirds of the stock units, contribute 72% of the farm’s income.

“Sheep will always be the biggest earners on this type of country because they are faster converters of feed to product.

That’s just the way it is. But while our cows certainly aren’t pampered, they aren’t neglected either.”

And beef production on Okohua has been steadily improving, thanks in part to the influx of top Angus genetics.

Nick says they are big believers in EBVs and they pay particularly close attention to mature cow weight, ease of calving, gestation length and 200 and 400-day growth rates.

“Our key objective is to breed the most efficient cow we can,” he says.

“That means a hill-country cow with a short gestation length that will winter at 550kg liveweight and produce a calf that can be weaned at 190-200kg in under 150 days.”

Graeme says high-mature-weight cows can cause damage on the hills, so this policy will help reduce that.

He says cows must have the ability to “live off their own backs” in winter, when pasture growth plummets to 1100-1200kg DM. They also need to calve unassisted because “they are pretty much left alone during calving”.

No room for heavyweights

The Streets’ quest for a more efficient hill-country cow has led to the recent introduction of a terminal mob – made up of cows that are consuming too much grass in relation to weaner weight.

Nick says the heavier cows, anything over 600kg LW, will be mated to a Simmental bull bought from Potowa Simmentals, Piopio, last year.

“The aim is to remove the least-efficient cows from the herd, and over time that will reduce average cow weight closer to the 550kg we want in mid-winter.”

Angus-Simmental progeny will be finished if possible, or otherwise sold store.

Cows will be weighed at weaning and those that are too heavy at their mature weight, R3 and older, will be drafted into the ‘obesity mob’.

Nick says the culling programme will continue until the ideal cow weight is reached.

Another initiative this season is the mating of an extra 55 heifers, with a view to selling surplus in-calf heifers as breeding stock.

“This gives us a good opportunity to capitalise on the investment made in top Angus genetics over the last ten years.”

The first crop of vetted-in-calf heifers were sold in early autumn this year and made $1500/head.

“That equates to a margin of about $300/head over a dry heifer. So that means our surplus Angus in-calf heifers will be making 32c/kg DM consumed, compared with 20c/kg DM for store heifers.”

Pasture control work done by the cows creates a platform for solid sheep performance on Okohua.

“The cow’s job is to condition the pasture for ewes and lambs,” Graeme says.

The Streets run a composite ewe flock, with a terminal mob mated to a Poll Dorset. Hoggets are mated at a minimum of 40kg LW.

Sheep fertility on Okohua has increased to the point where the mixed-age ewes achieved 150% lambing (ewes to ram) this season, a great result considering the steep contour of the farm.

“The sheep will always return more than the cows,” Nick says, “but without the cows we wouldn’t be able to put quality feed in front of the ewes and lambs.”