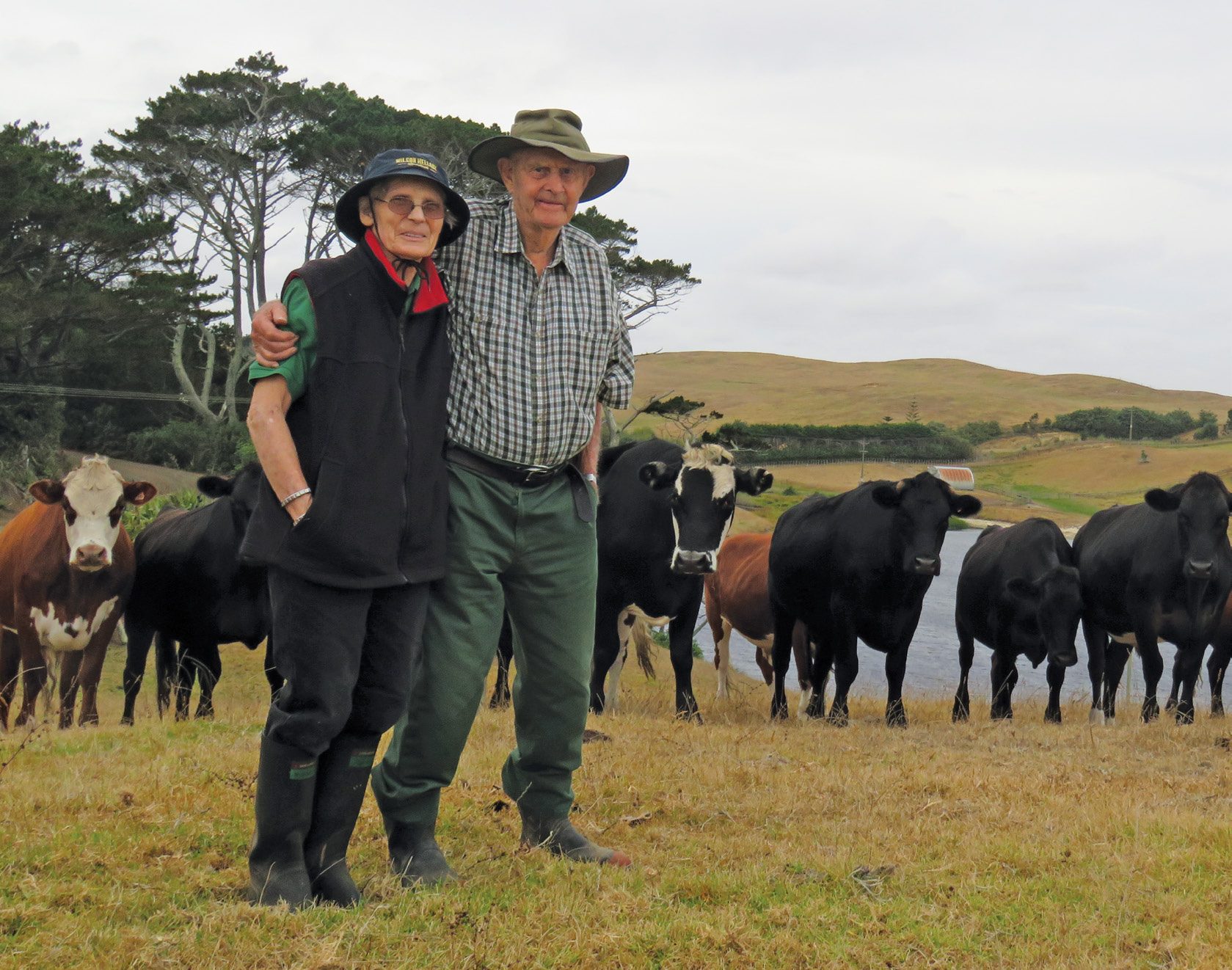 Left: Wylmur and Lou Thompson: Lou does today what he’s been doing for years – keeps moving and keeps enjoying what he does.

You won’t see a badly hung gate on Lou and Wylmur Thompson’s farms.

They moved to their 41-hectare farm of rolling flats in 1999, a steer-fattening block near Dargaville, a stone’s throw from Bayly’s Beach.

Just shy of his 97th birthday now, Lou said they keep themselves fairly busy running two farms; this one and a 54ha block just down the road they bought a few years earlier, which they had planned to build on until this farm with a house came up for sale.

“It’s only sort of a retirement job,” Lou said, sharing a few stories about farm life as he sat in his living room with a cup of tea and a slice of Wylmur’s 80th birthday cake in his hand. Behind him a wall full of hunting photos of them both leaping over fences, while he spoke quietly about his rural life methods and theories, and how he has filled up his years so far.

The pair used to breed cows and also run a few sheep on their former 290ha farm in Ngatawhiti, which Lou acquired in the early 1950s thanks to a successful Marginal Land application (to break in the land) and a loan of $35,000 which they finished paying off the day they moved to where they are now.

“When I got there, there was one gate on the cow yard. When I left there were 62 gates, you could open them all off a horse.”

At one stage they had 1700 ewes, mainly Romneys, but there were so many thistles they decided to get more cows, mostly Herefords.

On the breeding side, their bulls were Poll Hereford, Simmental, Shorthorn and Sallier.

“We bred about 140 cows each year, for many years. The Poll Herefords always had good temperaments. We started off with these, the others were just for interest sake.”

They started off selling the calves straight off their mothers at the local Westfield Sale. That progressed into yearling sales, then moved up to keeping and fattening steers.

“Then we bought the block next door, so we’d take the two-year-old steers there and finish them, that would take about 12 months and we’d sell as three-year-olds. It’s very rewarding to breed and sell.”

On their current farm they run just a few crossbred sheep, and fatten around 100 steers – black white heads, Hereford Friesians, and the Canadian breed Speckle Parks, which Lou likes because of their big bone.

“They’re dairy cross. You can’t get the straight cattle like you used to. They don’t come into the saleyards that often.”

They’re bought at 18 months and finished as three-year-olds.

“They average 392kg and they’re not even three years old yet.”

Lou has a few farming methods he sticks to. Continually shifting stock for one, to manage feed.

“I’ve never break fed or anything, and people couldn’t get over that the grass seemed to be the same over.”

Although Lou did admit that this summer’s drought was bad, even with his grazing methods. He was feeding out their silage in March, but usually doesn’t start until July, and that’s only for six weeks.

“This drought is the worst I’ve seen. These dry winters are hurting us. The water tables are way down, they’ve dropped four metres from when we moved here 20 years go.”

“The main thing is water. If the stock have water, they usually survive on nothing.”

In a typical year, they will sell finished steers late spring or near Christmas, some later ones he’ll carry through until autumn. Things are a bit different at the moment though and they haven’t bought any stock this year due to the dry and are running very light on numbers.

Lou’s usual rule of thumb is to never sell until his stock are properly fat.

“I’ve never got into that, selling as stores. I always sell as finished.”

Lou grew up on a farm just across the river down on the flats near Dargaville, his father’s returned soldier’s farm, and his grandmother brought him into the world.

“I don’t remember that,” he smiled.

He remembers they used to milk their cows by hand in the race as they stood on wooden boards, then they’d carry the milk to the separator.

“There was no concrete, no metal, and plenty of mud.”

After he finished school, Lou spread fertiliser. This was done in the form of an oat sack around his neck, filled with manure. He could spread three tonnes a day by walking the paddocks.

After he finished school in Arapahue Lou worked in Waitera, then in 1942 he joined the army, going to Italy in 1944 as a 21-year-old, to join the front line.

“We pushed the Germans back when the snow melted.”

All the single men were sent as an advance army to Japan afterwards, then the J Force took over. “I came home then and it was hard to get a job so I went cattle droving in Whangarei.

“I had my 23rd birthday over the equator coming home.”

After droving cattle, he worked on a 2100ha beef farm in Ngatawhiti, then went share milking in Ruawai to qualify for his Marginal Land Loan; Lands and Survey would put you on a farm, and in order to qualify for a loan you would have to accumulate points by gaining skills in different farming sectors.

Lou admitted he hated the dairy cows, so after three years and achieving his cow grading, he was offered his job back at Ngatawhiti, and leased a place down the road.

“Then I was in the pub one night and someone said ‘why haven’t you applied for Marginal Land Loan?” So he tried again, and succeeded, to the song of $35,000.

Wylmur was born in Umawera, north of Okaihau. They met at a show in Broadwood A&P Show, where Wylmur was riding in the show ring and Lou was the judge.

“There was no first prize for her, I thought she might get the wrong idea. I met her at the pub afterwards, I knew she’d be there.”

They both had children from previous marriages, but have certainly made a great life together, farming, and hunting their horses with Northland Hunt.

Well Wylmur still does, although Lou hung up the reins when he was 93 years old.

That’s one of Wylmur’s favourite things about living where they do now.

“You can go on your horse and go for a ride on the beach,” she said.

For Lou’s 90th birthday the Hunt put on a huge celebration and hunt members from all over the North Island gathered.

“I like to see the hounds and the hare, and people jumping fences. I like the camaraderie.”

They used to spend long weekends at A&P shows with the horses competing and had a thoroughbred stallion when they were first married.

“We bred some nice horses for showing and hunting,” Lou said.

He used to be the clerk of the course at the gallops in Dargaville, then Whangarei, then Kensington. In the rodeo scene in Northland Lou was a pick-up man.

Although he no longer gets in the saddle, he still loves the horses. They have a few young ones at home, and he enjoys the fact Wylmur still rides and hunts.

And Lou can still keep himself busy with his sheep dogs, he’s got a handful of Border Collies; Jan, Ned and a pup called Gale who he’s training.

“I used to dog trial with Huntaways, all around the North Island. I had a really good dog called Bounce, we had five wins, seven seconds, and 63 points in a season.”

Lou has and will always love rural life, and said he hasn’t met a bad farmer yet.

His message for youngsters in the farming sector is: “Learn to work. And learn to do what you’re told.”

Lou’s not too keen to change much now that he’s semi-retired, although they do get a bit of extra help around the farm with jobs like fencing.

“The only technology we have is an answer phone, we weren’t born in the button era. If someone wants to get hold of us, they’ll get hold of us.”

And he plans to keep fit and healthy.

“I do today what I did yesterday.”

Admittedly Lou does get up a little later than he used to, his day starts about 7am, whereas he used to be up at 6.

“I’ve always stuck to what I know. Some people think I’m old-fashioned, I probably am, but it works all right for me. We’re too old to do anything else.”

vamtam-theme-circle-post
 Category Subscriber - Country Wide
Ben Allott principle that I have really taken away from my involvement in the RMPP...
 Tags Animal Health
Read More

Beefing up a dairy businessUncertainty over onfarm sales