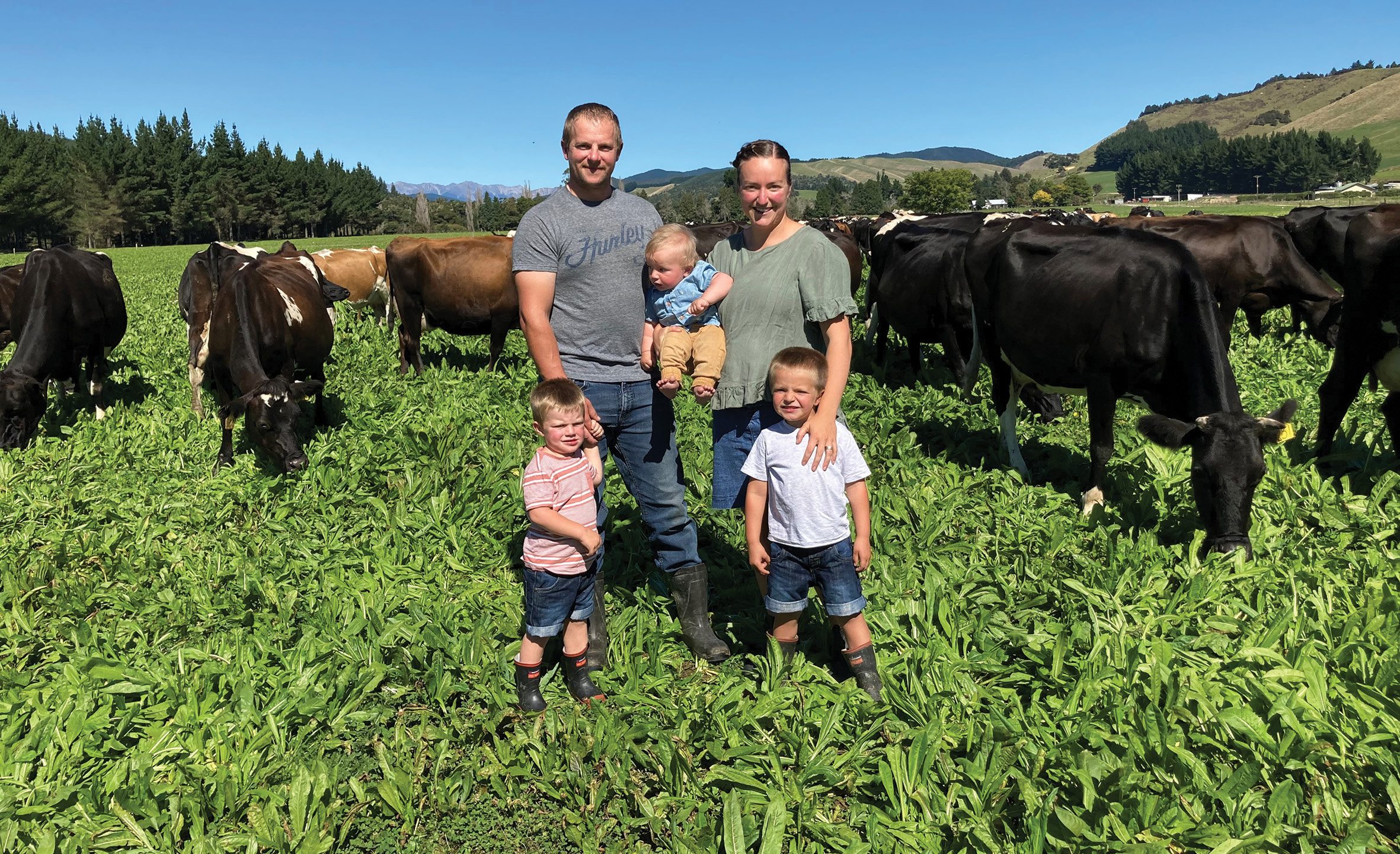 Carry-over cows have played a big part in Kevin and Kyla Freeman’s 50/50 sharemilking business because they provided the equity to buy a house which in turn enabled them to buy their herd – of largely carry-over cows.

The first-time entrants in the Dairy Industry Awards wanted to analyse every aspect of their business and they came away as winners of the West Coast/Top of the South Share Farmer of the Year.

They are in their second season as sharemilkers on a 140-hectare Tasman farm belonging to Kevin’s parents, Mark and Julie Freeman. Kevin worked as 2IC for the previous sharemilkers and when they moved on, there was the opportunity for the couple to step up and create their own sharemilking business and invest in cows.

Kevin grew up on the Rainy River farm, then joined the building industry to get different experiences and skills before returning to the farm. On a working holiday in Canada he met Kylie who had grown up on a beef and crop farm and they now have three boys, Mylan (4), Levi (2), and Cole (9 months).

When they were offered the sharemilking contract on Atapo farm, they had a year to prepare and because Kevin had done well with carry-over cows in the past, they went looking for cows they could buy at lower prices, build up and get in calf for their herd.

Going back a decade, good cows were fetching high prices and Kevin was using his builder’s wage to buy cheap carry-over cows, pay to graze them a year, get them in calf and sell them on.

It was profitable for a few years and enabled him to buy a house, which saw a good lift in price over the years and was sold to buy their herd for sharemilking.

“I knew we could buy empty cows, graze them for a year and get them in calf for our herd because we had a year in advance to do that.”

Two-thirds of the herd – 272 cows – were carry-over crossbred cows and the remainder of the herd was “odds and sods” heifers that were bought cheaply. The carry-over cows were synchronised for mating, with 60 receiving sexed semen straws. The result from synchronising the cows was getting all their replacements early in calving. Just 8% of the entire herd was empty. 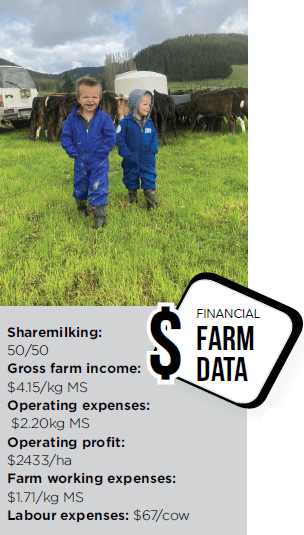 Their start-up herd of carry-over cows and surplus heifers averaged 455kg/cow in their first season and got Kevin and Kyla off to a good start.

For their second season, they synchronised the cows through the Why Wait programme which uses a single Cyclase (PG) injection to bring later-cycling cows forward a week. That results in more days in milk, a mid-point in calving at day 14, plus better early submission rates the following spring. This resulted in an extra 2000kg milksolids (MS) for the month of August.

“You gain 980 accumulated milking days by bringing those cows forward. We’re interested in continuing it to get as many cows in calf as early as possible. You get a good three-week in-calf rate.”

This season they are milking 390 cows and apart from a dry January, they have had just enough rain in the usually summer-dry valley to lift production a little and they are expecting to finish up around 455kg MS/cow.

Benchmarking across the region is difficult because of the diversity of farms across a range of terrain and climates, with the home farm sitting at 300 metres above sea level. Without that comparison, Kevin says judging their progress comes down to ticking their own personal KPIs by controlling spending and monitoring their return on investment. A major focus for their business is keeping the cost of production low and they achieve that through strict budgeting and keeping farm working expenses down – $2.20/kg MS plus running a largely grass-based system. They did buy in 90 tonnes of palm kernel when they couldn’t get a summer crop in the ground for their first season, but this year they have 14 hectares planted in chicory for that summer dry period, with 30ha of K-line irrigation helping with some grass growth. They also purchase 900 bales of balage off the nearby support block where cows are grazed for winter and young stock graze after weaning.

Most of their annual rainfall, which is about 1650mm, falls in winter and early spring and some of the streams on the farm only flow during those higher-rainfall months. In the past they have been temporarily fenced, but Kevin and Kyla are erecting permanent fencing along them to meet the obligations of their farm environment plan. It’s part of the ongoing improvements on the farm to protect the environment and Kevin says they have to embrace change which benefits the farm and the business.

“Sustainability has three aspects – it’s good for the environment, good for finance and good for social image.”

They now have two seasons’ sharemilking under their belt and a good milk payout forecast which is a far more comfortable position for them than when they began in 2020 as Covid created uncertainty around the world.

They say a positive attitude helped them through those times of uncertainty and they use that approach every day.

“We try to wake up and embrace the day and enjoy it.” 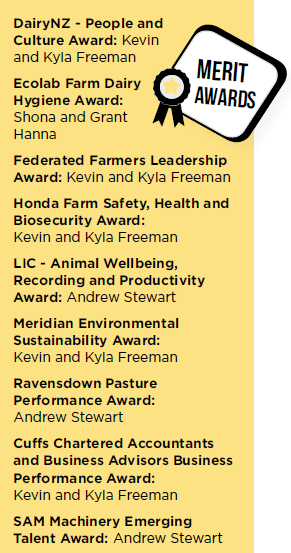 Kevin and Kyla won five merit awards including the DairyNZ People and Culture Award, plus the Federated Farmers Leadership Award which are both integral to the way they run their business. They have just one permanent employee, plus a casual worker through the busier spring and summer period.

Jack Hicks was a school leaver when he joined the team as a dairy assistant and has now moved up to 2IC, with Kevin predicting him to go places in the industry. It can be hard for young employees living by themselves on farms and Kevin says it is important to look after staff.

“We bring him in and give him meals weekly and have a game of cards or do something fun. We give staff an ice cream when they get the cows in or have a coffee at the end of milking. If they’re having a bad day, you can gauge it and see what you can do about it.

“You have to make sure they’re doing well because staff doing well means the farm does well. If your staff aren’t enjoying it, no-one enjoys it.

“We run small onfarm competitions so we can have a laugh at each other, like hosing out the yard or thistle grubbing competitions. When there are boys involved there’s always competition!”

Looking after staff extends to ensuring they know the health and safety policy from the beginning and being firm about following it so that they form good habits from day one.

Kevin and Kyla would like to see young people across primary industries engage more in the region and that has prompted them and like-minded others to kindle a Tasman Valley Young Farmers group in the Top of the South where there’s everything from “hops to bees” in farming.

“We’re trying to crank it up and have a thriving young farmer group here. We want to capture them all because we can all educate each other. We believe we need more and more young people in dairy because I think it’s the best industry to be in.

“It’s pretty special how the dairy industry can share knowledge. It’s not a competition against each other – everyone shares knowledge and does better by using tips from everybody else. All your industry partners, reps and advisers have something of value to say and you can learn what you want from them.

They feel very fortunate to be farming with a young family as it gives them a lifestyle to spend time with them. On days that aren’t so busy, they put all three children in a vehicle and take them with them around the farm and Kevin says it is a real privilege to be able to include them in your work.

He says they are definitely keen on farm ownership of the family farm in the future and possibly another farm one day. Farm ownership makes it more personal for those running the farming operation and he thinks that is important for the industry, as well as fostering the younger generation to follow on.

“You need to employ young people coming through the industry to take up the baton.”