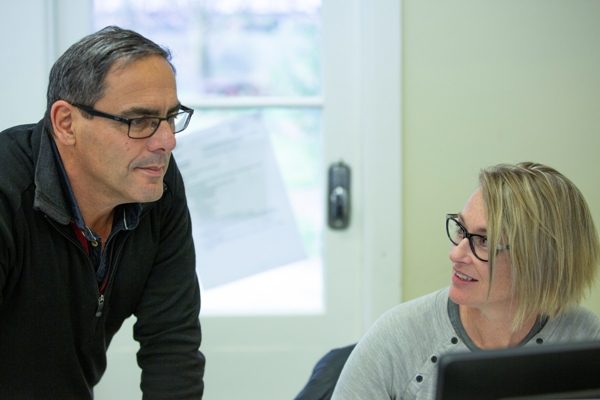 A milk sample test to identify mastitis causing bacteria that can be done right in the farm dairy has been a game-changer for mastitis management, Theland livestock performance programme manager Angela McEwan says.

The system uses new technology to establish whether bacteria is present, to identify the type of bacteria and importantly what antibiotic treatment will be effective.

It’s a big step in helping the fight against antibiotic resistance and is paying dividends in better cure rates, faster return to the milking herd, less unnecessary or ineffective antibiotic usage and time savings.

It gives every person in our milking teams the best opportunity to identify mastitis – if they’re relying on visual cow cues they may not see it, either because it’s not obvious or because people’s skills at that can vary.

Because they get an accurate result back within 24 hours without having to send the milk sample away Angela says the system has empowered farm teams to take ownership of mastitis management and has driven a significant change in behaviour.

“When they could see immediate rewards in getting back more accurate and effective information more simply it changed behaviours and people became a lot more engaged in this whole area,” she says.

It shows how great science, new technologies and a rapid flow of simple, relevant information that’s come from interpreted data can effectively make a big difference at the farm level, Angela says.

About a year ago she recognised some farms were having an increasing number of cows with mastitis that was hard to cure and in putting together a protocol for managing that across the 26,000 cows on 29 farms owned by Theland they looked at available technologies.

The Mastaplex system uses a “lapbox” that’s on farm which analyses the samples right there in the farm dairy, coupled with the reporting system via email looked like it would tick a lot of boxes.

It’s been trialled on three farms in the group since late last year and is getting the thumbs up from the management team and farm team alike.

“We had and still have a very robust system for mastitis detection. The milking teams strip one quarter at every milking throughout the season so over a two-day period they’ve checked each cow.

“It gives every person in our milking teams the best opportunity to identify mastitis – if they’re relying on visual cow cues they may not see it, either because it’s not obvious or because people’s skills at that can vary.”

While the protocol is robust the treatment decision process was a bit clunky, she says.

Under the Mastatest system a milk sample is taken as soon as the farm team member suspects a problem and they put the sample into the lapbox for analysis.

They don’t have to drive to the vet clinic or organise a pick-up and within 24 hours both the manager and Angela receive an email detailing if there’s bacteria present, what it is and the antibiotics that can be used to treat it.

Each antibiotic has a sensitivity level assigned to it which shows how sensitive the particular infection is to each antibiotic.

“What became obvious straight away was that we were dealing with a lot of different bacteria and varying levels of sensitivity to antibiotic treatment. The system was recommending different antibiotics for different cows all the time.

“We realised very quickly that the ‘one size fits all’ type of treatment really isn’t going to work and is probably just going to add to any resistance problem.

“It shows we really can’t make generalised recommendations – we need data so we can treat animals case-by-case.”

It’s also picked up gram-negative coliform bacteria which aren’t very sensitive to antibiotics so, providing the cow is not sick, she is best treated with anti-inflammatories and being well milked out instead.

Angela records all the Mastatest information and says it’s been valuable in identifying potential onfarm issues that can heighten the risk of mastitis.

“It’s allowed us to become more effective with our proactive management – when you know the bacteria you know where to start looking for causes.”

In one instance, for example all the cows from two units were milked through one farm dairy until enough cows had calved to get the second farm dairy operating.

The decision to start up the second plant was based on logistics, walking distance for the cows and when it was taking too long for people.

But with the data it was immediately apparent cow numbers on the yard reached a critical point past which coliform infections began to spike.

It’s commonly caused by environmental factors including effluent on teats and once cow numbers got too high the faecal load on the yard increased the chances of the infection.

In another instance knowing the bacteria prompted a closer look at the automatic teat sprayer.

Angela says the farm teams reported fewer cows in their hospital mobs and cows are returning to the milking herd faster.

The information is hugely valuable for looking back at how effective an onfarm mitigation strategy has been and for identifying better farm management practices, she says.

“It’s also very good antimicrobial stewardship which is something we focus on. This process allows us to build on that.”

Results of a study recently presented at the Dairy Cattle Veterinarians Conference show that, based on Mastatest data collected over the last season, antibiotic usage was reduced by 24% and there were no negative affects when it came to cure rates as a consequence of waiting 24 hours for test results before treatment.

Another study of 4500 Mastatest results found about 10% of samples didn’t show any bacteria present and 12-13% of samples grew gram negative coliform bacteria.

Veterinary clinics sell the system with the lapbox’s recommended retail price $1000 and tests $15 per test.

• The milk sample is put into a multipartitioned cassette and put into the lapbox.

• Six of the partitions contain a medium which undergoes a colour change with
bacterial growth – different colours for different bacteria.

• The other cells contain different antibiotics or different dilutions to work out which is most effective.

• A camera in the box captures the colours and colour changes and the information is sent via the internet to the cloud where an algorithm analyses the results and generates an email with the results.

• Mastaplex is a start-up company founded by Dr Olaf Bork.

• The company’s located within Otago University’s campus in the Centre for Innovation where Bork pioneered the technology with the help of Callaghan Innovation and seed funding from WNT Ventures and Pacific Channel.

vamtam-theme-circle-post
 Category Dairy Exporter
Elaine Fisher The opportunities to more rapidly progress his career and herd ownership goals are...
 Tags DIA awards
Read More

Mental health: Am I fun to live with?Dairy with a side of beef