Dairy farmers looking to expand their use of beef semen could find an answer in Speckle Park cattle. Sheryl Brown visited Waikato sharemilker Derek Hayward to see how he is using the black and white beef breed to add value to his business.

Derek and Catherine Hayward are in the stock business.

Like most sharemilkers their money is invested in their cows. They milk 400 cows just outside of Cambridge in the Waikato, where they have been for 10 years.

They own 120 pedigree Jersey and Ayrshires and the rest of the herd is made up of Holstein Friesians.

A few years ago the couple came across an opportunity to invest in Speckle Park cattle and saw a chance to add another branch to their investment portfolio.

“Our business at the moment is pure and simple cattle, we’ve got to look to add value where we can,” Derek says.

“I’ve always had an interest in beef and we’ve been watching the breed for a long time and I could see the quality of them.”

They are working to build a quality beef herd for the market, while adding value to their dairy operation via breeding and selling crossbred Speckle Park calves.

Derek used 150 Speckle Park straws across his dairy herd this year, 105 of those will be crossbreds which he will sell as four-day old calves.

The other 45 cows have been put in-calf with pure-bred Speckle Park embryos as Derek and Catherine want to build their beef herd to 100 breeding cows within the next couple of years.

They lease two nearby blocks to rear their young stock and graze the beef cattle.

There is increasing demand for the unique speckled black and white beef calves, Derek says. The four-day-old crossbreds are reaching $300-$400 and he has calf-rearing buyers regularly looking for more Speckle Park calves.

They appeal to calf rearers because they have keen survivability traits and are easy to teach to drink.

“They are so seriously easy to feed – they get up and go. Nobody minds teaching the Speckle Park calves to drink.”

Speckle Park are polled which is an extra bonus and are early maturing with impressive weight gains targeting 18 month markets.

One of their strengths as beef cattle is their ability to adapt and eat whatever food is available to them, Derek says.

“They’re tremendous converters – they live off the smell of an oily rag.”

A white Speckle Park bull will colour mark across any dairy breed, making it easy to identify beef crossbreed calves on the ground.

Derek uses the Speckle Park across his Jersey, Ayrshire and Friesian cows. Even with Kiwicross cows the strong colour marking means it’s always easy to identify the beef calves, he says.

“When using the right bull there is no argument it’s a Speckle cross calf.”

In Derek’s experience they have been easy-calving over his dairy cows and he has used Speckle Park across his heifers this year without any difficult calvings.

Working with beef genetics across a dairy herd comes back to doing your research and choosing the right bull, he says.

What makes a good Speckle Park bull depends on what a dairy farmer wants to achieve.

It depends if they want to use a bull for its light birthweight over heifers, or are happier with bigger calves from their cows to dominate at the four-day-old market.

“Every farmer has an end goal – it’s what you want to achieve.”

As with any breed, dairy farmers need to do their research and use the best genetics to get the results they want, Derek says.

“People looking at using Speckle Park should do their research, research the bulls, be clear on what they want to achieve and make sure their breeder or semen company are providing them with the information they need.”

If people don’t ask the right questions and end up using the wrong bull to suit their herd it will tarnish the breed, he says.

Maungahina Stud owner Mark McKenzie and Derek have been working on dairy trials with Speckle Park bulls for the last few years and have been impressed with the results.

“Mark and I are committed to making sure the right bulls are used in the dairy industry,” Derek says.

Speckle Park cattle are making their mark in the global beef market. The breed is starting to become recognised for their high marbling and ability to reach top weights within 18 months.

Australian beef heavyweight Minnamurra Pastoral Company which runs 3500 Angus cattle is now investing strongly in Speckle Park and wants to get their breeding numbers to 500 as quickly as they can.

Getting that recognition for the breed from a company like Minnamurra is substantial, Derek says.

‘The beauty of this breed for dairy farmers it’s they’re easy to rear, they get up on their feet and suckle straight away.’

The Speckle Park International association has had more than 40 new Australian members join since the start of the year, another indicator of the growing popularity of the breed.

There are 15 New Zealand members, including Derek and Mark McKenzie, who first introduced the breed to NZ 10 years ago.

The stud also made an average of $2544 for 18 first-cross Speckle Park heifers. A pen of five Hereford-Speckle Park first cross unmated heifers sold for $2900 each, which is an Australasian record.

Mark sells Speckle Park semen to LIC and says he has increased from 200 to 5000 straws in the past couple of years and is getting more calls from dairy farmers interested in the breed.

“The beauty of this breed for dairy farmers it’s they’re easy to rear, they get up on their feet and suckle straight away,” Mark says.

Their survivability is incredible and stems from their history in Canada being born under the threat of being eaten by coyotes, he says.

Mark’s top bull Maungahina Kidmans Cove has a record eight for Intramuscular Fat, which is competitive with the Wagyu breed.

“There is a huge amount of marbling in the meat and we haven’t even bred for that trait.” 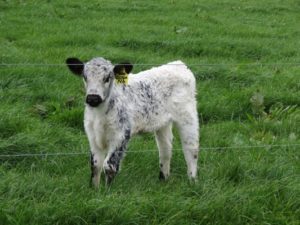 Speckle Park are a carcase-orientated yet maternal pure-bred (not a composite), breed of beef cattle. They are polled and British-bred originating from Canada. Speckle Parks are moderate-sized. Mature cows range in weight from 600kg to 850kg and mature bulls 1000kg. Calves average 30 to 40kg at birth and wean off at about 230kg to 370kg.