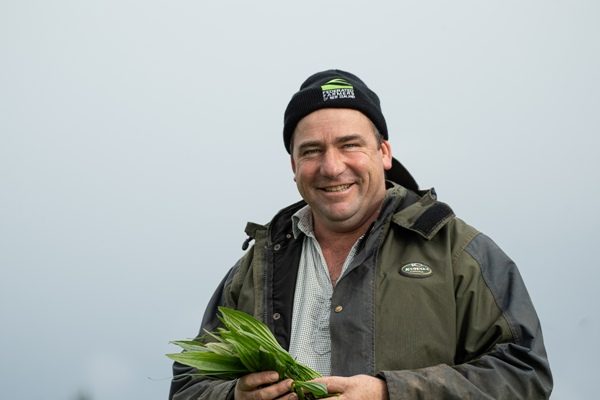 Tararua dairy farmer Neil Filer was converted by one field day – he came home and decided to plant plantain.
“I was blown away by the numbers at the (Plantain Project) field day at Ben Allomes’ last November.”

“I thought ‘shivers that’s quite serious’ –a great opportunity for reduction in N loss if we can get up to 30% of the diet into plantain.

“So I came home and sprayed out my irrigated area (14 hectares) and instead of putting it into turnips – I put it into
plantain.

“That area is 15% of the farm and it’s a pain to shift the K-line irrigators in a turnip crop so the plantain seemed like a good option.

“Our young-gun sharemilker, Ben Tippins and his partner Sami Pope were keen-as to run with it so we thought it would be good to encourage them too.”

Drilling straight from grass to plantain using 4l/ha of Roundup before direct drilling 12kg/ha plantain got the crop established with a post-emergence weed spray and to his delight Neil says the plantain really seems to like the Tararua climate.

“It might be the new ragwort for us – it’s doing really well.”

The crop established well and during the dry summer was a good use of the limited water the Maharahara farm has access to.

“Irrigating it kept it ticking along and we had the seven paddocks on a 21-day round.”

“We kept the cows on it until into the autumn and when we got the autumn rains the leaf just exploded away – which was great for N uptake and preventing N leaching.”

The irrigated area is adjacent to the former Te Rehunga dairy factory and Filer says the P levels are “through the roof” due to all the whey that was pumped on to the block back in the factory days.

“Now we are into calving we are feeling our way.”

Due to the high calcium in the crop Filer says he avoided it pre-calving, but it’s been great to have the milkers on a mixture of eight hours’ straight plantain between milkings and then overnighting on 12 hours’ pasture.

“We haven’t had any down cows so the minerals must be working – but it is early days as we are only halfway through calving.”

Filer is planning to try and keep the plantain as a pure sward on the irrigated area and has been kicking around ideas of how to keep it going and rejuvenate it if need be.

“The crop looks stronger this year than last year, and it was an advantage not being left with a bare patch like after the turnip crop – where we would be waiting for rain to re-grass. This way the plantain just kept growing with no lag period and we had a 3 tonnes per ha advantage of feed and we could keep milking on it.

“But the plantain irrigated area I am just going to try and keep as a pure sward – if it gets wrecked in the wet weather I can re-drill parts of it, or spray for weeds and re-establish on the same area.”

“By Christmas we should have it up to that 30-35% of the cows’ diet counting the crop, the over-sowing of all the pasture swards and putting it into any muddy areas that need reestablishing.”

Neil admits he is a great fan of broadcasting seed, “it’s such a low-cost way to reseed”. He went on to say that using pasture hay with lots of seed in it has been his go-to way of rejuvenating a ryegrass clover mix in the past.

He’s already seen the spread of the plantain seed after the summer seed development of the plantain, saying the plants are popping up around the perimeters of the irrigated area.

He might even fill up the runoff with plantain and make plantain hay off it, just to “see how that goes”.

When balance date arrives for Neil in late October for pasture growth he says they usually drop 10% of the area out of grazing for the turnips – but this year they will drop the plantain out of the rotation, shut it up and tidy it up by drilling or spraying and then bulk store the feed up for the summer.

“We can push feed on to that area for the summer rotation break feed the cows on it over the summer.”

In the dry the cows were getting the plantain in the day and dry pasture and silage at night – which was easy just feeding out once a day, Neil says.

Even when the plantain went ‘hard-out reproductive’ Neil says the cows mowed it all by lunchtime but any remaining seed head hardened off and dropped its seed before the next round.

“In the past we have tried these herbs – plantain, chicory and clover mixes, but in the dry the herbs collapsed and my favourite – the turnips – were still going strong.

“The sharemilker and I had an informal trial and grew 5ha of each, but I went off the idea once the herb sward collapsed in the dry.

“But we have since invested in the irrigation and the plantain is a great use of a little bit of water.”

For the Filers, their heavy soils and light stocking rate along with lower rainfall and flat terrain mean meeting the N leaching limits under Horizons One Plan is not difficult – although they don’t have a consent to farm due to the difficulties Horizons had maintaining the consents pathway after losing a court challenge from Fish and Game and the EDS.

“We are under the 20-year numbers at the moment – we will be sweet when the consenting begins again. This summer dry, dryland, conservative farming approach serves us well for minimising N leaching.

“We sit at a System three with the status quo, and as soon as we are consented we can intensify the two farms if the payout is favourable – we like to breathe in and out and lift stocking rate with the increasing payout – it’s really about how much supplement we want to bring in and how much profit there is in it.”

Grass silage, turnips and palm kernel are the levers they can pull to ramp up production.

“PK is the big one, we can ramp that up and feed it through the shed if there is a margin in it. The plantain seems to help with keeping under the FEI as well – we found out last year we can feed the plantain to offset the effect of more PK on the FEI.”

While he says they don’t really need the plantain on their farms, it’s almost a silver bullet to reduce N leaching on other farms in the catchment.

“If the plantain is even half as good as the scientists say it is, it could be a great use for other parts of the country too.”

Even if the plantain is a welcome addition, Neil says it’s an extra compliance cost on the system and extra work for the farm manager and makes it complicated during weed spraying when selective herbicides are needed.

“And I am worried about the cost of seed when I rock up to the seed rep and ask for two tonnes to broadcast on
to the 350ha milking platforms to convert to mixed swards incorporating the plantain – they might jack up the price if it’s really popular!”

The Filers have been in the district for 15 years and leased the Cheer farm for 10 years before buying the block in 2012. They enjoy encouraging young farmers through the progression pathway of working on the bigger farm then moving into management and sharemilking on the smaller block to grow their experience.

Neil himself prefers working with the big herd and loves the productive Takapau silt loams soils alongside the Kumete stream and the reliable 1200mm rainfall of the district, as well as the traditional family farm nature of the locals.

He says there is a real family farm camaraderie where people and farms are small enough in a close enough community to work together – that’s why the plantain project could work – “we are all in it together – together we can solve this”.