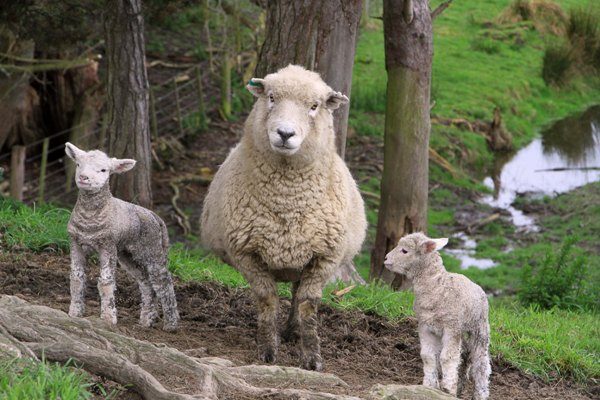 The easiest time to grow a lamb is from birth to weaning, and small gains in lamb weaning weight can have a positive effect on the bottom line and the farm system, BakerAg agribusiness consultant Richmond Beetham says.

Ewe’s lactation peaked 2-4 weeks after they lamb and tailed off after that. Beetham said the higher you get that peak, the longer the tail would be and the more volume of milk produced. After peak lactation, the amount of milk produced reduced by 19-26g/day and better nutrition had little effect on this. If ewes were underfed in the first four weeks of lactation the peak would not occur and there would only be a tail. The amount of feed in front of both the ewe and lamb could make a difference. Beetham recommended shuffling on paddocks which were tight, or adjusting the stocking rate. Lactation for twins was more important than for singles. A single lamb from a ewe getting fed 75% of optimum was still getting fed more than a twin lamb from a ewe getting fed at 100% of optimum.

Lambs naturally transition from milk to grass, and by week six a lamb’s diet included a significant amount of pasture. Lambs start eating grass from two weeks old and are fully adjusted by three weeks, although milk still makes up the bulk of their diet. When a lamb is about 4-5 weeks old it changes from one stomach to four stomachs. By week eight, pasture quality is the most important factor for growing lambs because most of the milk supply from the ewe has gone. For an April 1 tupping date this would equate to mid-October.

A twin-bearing ewe produces 30 to 50% more milk than a single but this is shared between both lambs, so on average they get two thirds milk of a single. To make up for this, twin lambs are forced to start eating pasture at an earlier age so it is important multiples are on the best quality pastures. By docking time, lambs are ruminants getting a milk top-up and from docking to weaning 80% of their diet is grass. Growth speed comes from energy intake so high quality grass is vital to high lamb weight gain.

The better pasture quality, the better the lamb. Winter clean-up of paddocks is worthwhile so pastures are high quality and growing for spring. Do this by including paddocks in the winter rotation rather than missing them out before set stocking.

To improve pasture quality, Beetham suggested to top paddocks with cattle. Although the margin when buying cattle in spring may be small, the value added to the bottom line by improving weaning weights in lambs was well worth it. Another option was to box paddocks of ewes and lambs and take a paddock or two out, to allow concentrated grazing resulting in retained pasture quality on the balance of the farm.

Chemical topping was an option available to summer safe country. The aim of this was to prevent the low producing annual and native grass from going to seed. It also let light into the sward, allowing clover and other high quality species to expand in the area.

Putting ewes and lambs on to forages such as plantain, clover and chicory had positive impact on lamb weaning weights. Using ram harnesses to get ewes into 10 day lambing groups could help with putting lambs of an even age on to high quality forages. Early weaning could be beneficial because as a lamb aged it moved into competition with its ewe.

Separating them could reduce competition therefore improve growth rates especially when on high quality feeds. Creep grazing was another tool which could be used, this was when lambs pass through into the next door paddock to get first pick but ewes cannot.

Improving lamb weaning weights had advantages; the potential to earn more money or alternately spend less money and the opportunity to streamline your farm system.

Higher returns could come from selling lambs prime off mum (POM) which tended to be earlier when the schedule was higher. Lambs POM tended to have a higher dressing out percentage. Lambs between 30 and 35kg LW with every kilo increase in weaning weight resulted in about a 10 to 15% increase in the numbers of lambs killed POM. Increased weight in store lambs meant sales could be brought forward if store prices began to drop, and created opportunities for a lamb trade.

Getting more lambs away POM meant fewer lambs on farm post weaning. This reduced parasite challenge across the flock meaning less drench and less work. Less feed consumed after weaning, reduced pressure on pasture and provided feed options for other stock. Fewer lambs gave more flexibility in drought and reduced reliance on expensive forages. Crops could be used to lift other stock. Heavier ewe replacement lambs meant less work to get them to mating weights and more hoggets could be put to the ram.

The Farmax model looked at three different weaning weights. The policy was changed from selling all lambs store to killing as many lambs POM at weaning and killed as many lambs through autumn as the model allowed. Trade lambs were gone by May 31. Models were based on the same quantity of feed and optimised so they were feasible. Cattle policy stayed the same. Prices were based on long term averages. 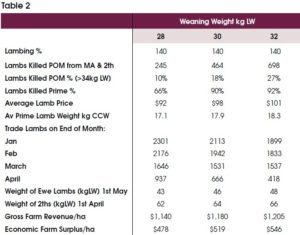 Table 2 shows the immediate benefits “in the bank,” with more lambs killed prime off mum (POM) and lambs that can be killed heavier through the autumn with a higher average price. What is hard to put a value on is the impact on the farm system and the added flexibility. The improvement in two-tooth mating weights (62kg – 66kg) would have an immediate impact on the flock reproduction and a long term impact on the ongoing performance of the flock.

Table 3 gives a snapshot of some good operators around the Wairarapa and what weaning weights they are achieving. Some of the farms have a number of years of weight data.

Article published in Country-Wide Sheep. This article is part of a free taster of the quality content provided in Country-Wide every month. For less than $10/month, you can receive this detailed information to help improve performance within your business.  nzfarmlife.co.nz/country-wide/
Supporting New Zealand journalism.
 Tags Country-Wide Sheep October 2019, Sheep