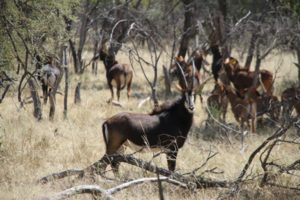 Shooting wild animals –not necessarily with a gun – is the growth industry of South African agriculture with 20 million hectares of damaged and marginal agricultural production land converted to game ranches in the past 15 years.

South Africa is a very dry country with an annual rainfall of around 600mm. Many regions can no longer support conventional agriculture which relies heavily on regular applications of water to grow crops or pasture. But wildlife has survived on native drought-resistant pastures and shrubs on the continent for thousands of years and the growth of tourism in the country is bringing in people wanting to interact with wild animals and birds –shooting them with a camera or with a gun.

“Sustainable ranching has also dramatically increased numbers of animals across the country and eight species have been saved from extinction.”

Home to buffalo, lion, giraffe, hippopotamus, zebra, a large variety of antelope and close to 50% of the bird species in South Africa, Thithombo park caters for overseas and South African tourists wanting to watch birds and other wildlife while staying in luxurious surroundings and using facilities such as a day spa, swimming pools, lodge, conference and wedding facilities.

Twice-daily game drives on open trucks are included in the price and guided by trained rangers who know where to spot the best wildlife and track the movements of prized animals to show them off to the tourists. They also specialise in telling yarns – like how a person is “more likely to be killed by a hippopotamus than lions and leopards combined because the hippo will knock you down, stomp on you and the males’ sharp teeth can rip your stomach out – but they won’t eat you”. It’s a powerful incentive to stop you hopping off the truck to get a better shot.

Game ranching increases animal and plant diversity, protects soil and water and encourages genetic diversity through breeding programmes like those going on at Thithombo, he says.

Game breeding has grown rapidly in the past 10 years with ranchers buying in wildlife based on genetic characteristics aimed at improving their stock for hunting, tourism or supply of venison.

African buffalo are prized for the size of their massive curving horns growing out of a keratinous band across the top of their forehead. The main breeding sire at Thithombo is Skukuza, with a 1.22-metre spread of horns. The prized sable antelope bucks are Rambo, with a pair of 1.11m trophy horns curving back from his head and Koos who has 1.27m horns.

The bulls are mated to game park females to increase the size of trophy horns of the offspring.

The South African hunting culture sees local hunters visiting game ranches each year to hunt meat, taking it home to butcher themselves or to have it semi-dried and preserved into biltong.

Biltong hunters pay for accommodation and hunting licences and spend the weekend hunting antelopes. Impala, bushbuck, springbok are the least-expensive, followed by kudu, wildebeest, hemsbok, (3000-4000 Rand = NZ$300-400) then eland or buffalo (which can be eaten but is more likely to be shot for trophy horns.

Wildlife Ranching South Africa (WRSA) is a voluntary body serving the interests of 12,000 wildlife ranchers across the country working with government to lobby for support for ranchers undertaking breeding, hunting, wildlife tourism and processing of game products.

The WRSA are currently lobbying government for licences to establish production and slaughter facilities for the wild game meats. As game ranching moves into managing animal numbers the supply of game meat is building and is matched by demand from restaurant and food service markets but the industry needs to be regulated and establish food safety standards before marketing the lean, organic and “ultimate free-range” meat products.