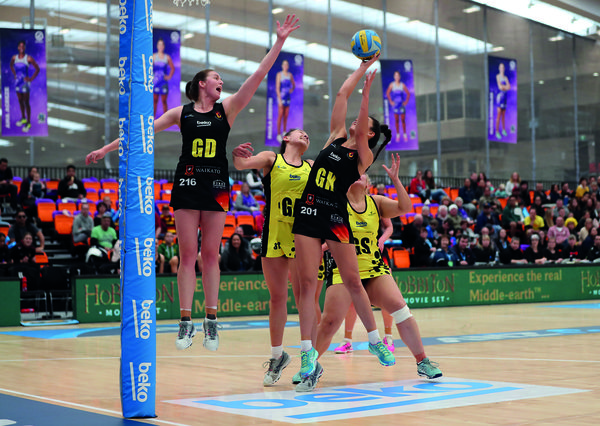 Jenna O’Sullivan has the traits to be a rising netball star and is helping farmers find the best traits for their herd. Sheryl Brown reports.

RV Ambreed’s Jenna O’Sullivan will be working hard on farms and on the netball court next year. The 26-year old is the Ambreed field consultant for Matamata, Okoroire and Cambridge and as a sire analyst, works closely with local breeders around elite cow identification, contract mating and elite bull selection.

She has also just landed a contract with the Waikato-Bay of Plenty Magic squad for 2019.

She says the year ahead will be busy spreading time between a heavy training load, commitments with Magic and continuing to work with farmers out in the region.

“It will be a huge commitment. I believe being well-organised and having good support around me will be the key. I am very lucky that CRV as an employer are very supportive of my ambitions with netball.”

Jenna grew up on a dairy farm at Inglewood in Taranaki, where her parents still milk 210 Jersey cows.

She admits to still being a big fan of Jersey cows.

“I’ve grown up with them. I think they’re cute – and they have lots of personality.”

She’s always felt in her element out on the farm as a kid and knew she wanted to work in the agriculture sector.

“I didn’t know specifically what I wanted to do, but I knew 100% it was something to do with farming.”

She studied a Bachelor of Agri Commerce at Massey University in Palmerston North, majoring in farm management.

At university there was a big push to look for a graduate position immediately, but Jenna decided she wanted to travel before she started her career.

She worked on her parents’ farm for a few months to save before heading off for two years in the United Kingdom and Ireland.

She worked on three dairy farms, two in Ireland and one in England for about four months on each farm, travelling in between jobs.

It was a great way to travel the world and it was a good experience to get to see different farming systems, she says.

When she got home she took up a position as 2IC on a 600-cow farm at Karapiro in the Waikato. However, she was open and transparent with her new employers that her goal was to try and get an industry job rather than stay farming.

She stayed in the role for six months through calving and mating before she got a job as field consultant with CRV.

Before returning to New Zealand she had applied for a role with CRV Ambreed. Although unsuccessful, she kept in touch with people at the office and made a point to go to Hamilton and meet them. Her commitment to keeping in contact paid off.

CRV has always been a company Jenna wanted to work for. Its values and philosophies around breeding match her own, she says.

“Breeding and genetics have always been my passion and like CRV, I like breeding cows that farmers love to milk. I think that’s important on farms.

“I think CRV has a wide range of genetic options to suit all farming systems. I think the people at CRV have passion for what they do. We are all there to help farmers breed a cow they love? And I like being a part of that.”

Farmers have their own individual breeding goals, and one bull won’t suit every farmer, she says.

Whether farm operations are a DairyNZ System 2 or a System 5 different bulls will suit each system, she says.

CRV field consultants work to tailor a breeding plan to suit each customer’s needs for their specific farm and their system.

The future cow is going to need to be more efficient and it will be exciting to work with farmers toward breeding cows for future systems.

Farmers may be milking fewer cows, but they will be better, more efficient and healthier, she says.

“Longevity is extremely important. Cows that are resilient, cause fewer problems and have ability to get in-calf year-upon-year are the cows you need, in any herd regardless of scale.”

Working through these breeding solutions with farmers is the part of the job she enjoys.

“I’m not trying to sell farmers a product, I genuinely want what’s best for them. I hope I’m valuable in helping them select the best genetics for their herd.

“There is nothing that makes you prouder than going to see a farmer who loves their
cows and is really proud of the genetics that they’ve bred through their herd. That’s what I like about my job is being able to be part of that.”

Her role with CRV Ambreed gives her the flexibility to accommodate her netball commitments while working fulltime. Luckily the netball season doesn’t cross over with the busy part of the dairy season.

Jenna played a lot of representative netball for Taranaki and the Manawatu growing up, but stopped playing when she went on her OE.

Last year she was missing playing so she trialled and got selected for the Waikato Bay of Plenty team in the National BEKO League.

She got called up into the Magic squad as an injury replacement for the last two games of the season, and was stoked to get game time in both games.

“It was pretty overwhelming, I didn’t expect to get court time when coming in as injury cover, but you grab opportunities like that with both hands. I’m absolutely delighted to be contracted with the Magic for the 2019. I am really excited about taking the step-up next season.”

Standing at 1.83 metres, she will play circle defence alongside Casey Kopua and Kelly Jury.

Her pre-season training has begun, which involves training twice-a-day, Monday to Friday, and another training session on Saturday.