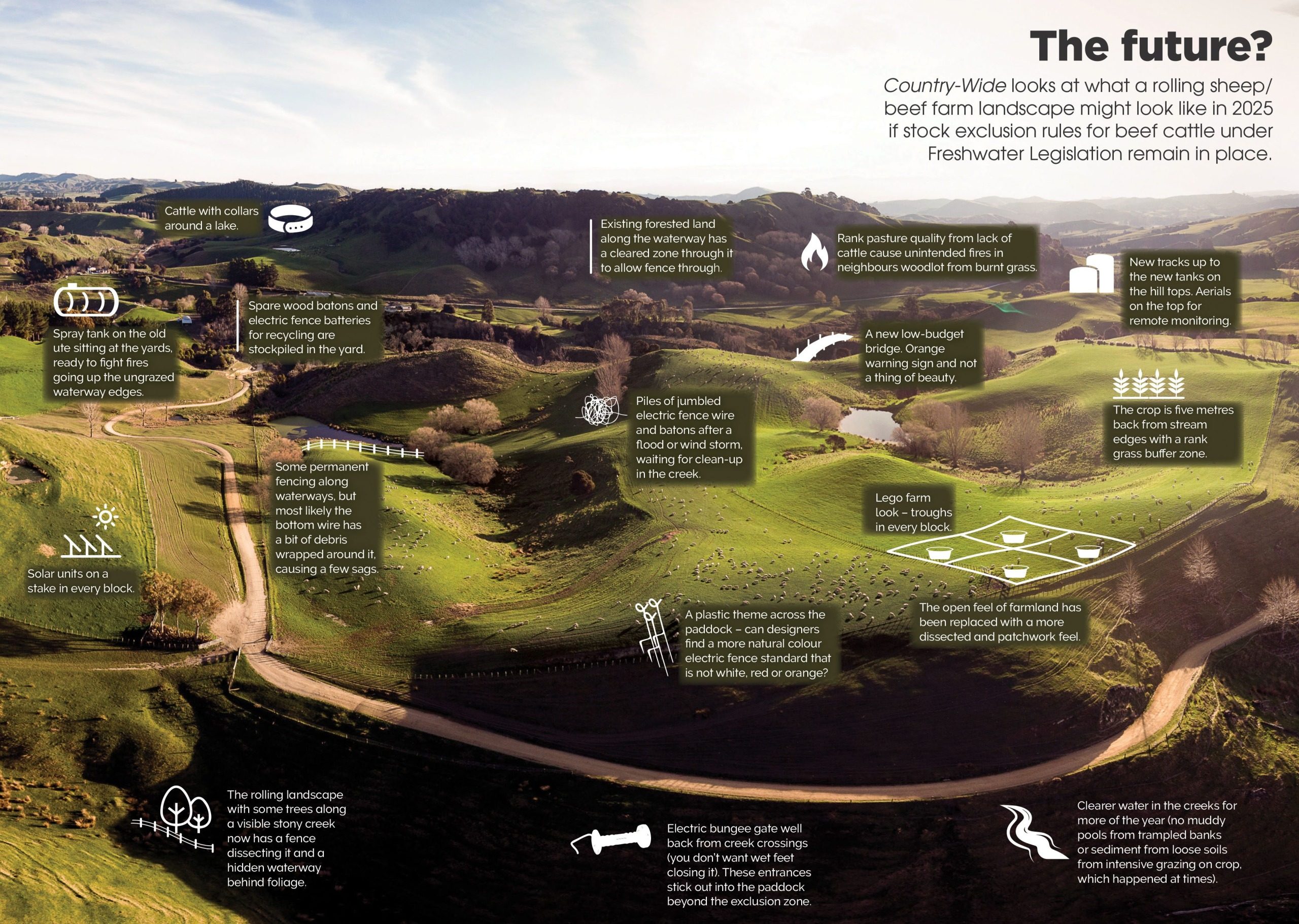 What shaped farm landscapes in the past and what is driving it now? Joanna Grigg takes a glimpse into the past to better understand the future.

Ever wondered why there are fence lines on the farm that don’t really match the contour or aspect? Separate title areas with no water sources? Old shepherd huts every 20 kilometres or so? How about those mysterious small 19-acre paddocks, when every other block is much larger?

The way land was divided, grazed, cleared and built on was not just driven by the needs of the stock, the runholder or the logical lie of the land. Rules and regulations, designed to control the amount of land a landowner or lessee could take up, has shaped the country. These had unintended effects on landscape and infrastructure, as people found loopholes and ways to work the system.

This theme carries on to the present day. Freshwater regulations look to make the next five years the era of the hilltop tank, the hotwire, the electric fence standard, the new track cut to the tank, and the overgrown creek bed.

The landscape will change. In the effort to improve stewardship of waterways it may have, in turn, a perverse and unintended negative outcome on the stewardship and aesthetics of the land. Weed sites, fire risk corridors and a layer of infrastructure over the land that is at its worst ugly and, at its best, intrusive. Depending on how much fencing is required, the new infrastructure is potentially unmaintainable with farmer resources and liable to fall into disrepair.

The time to plan and think through unexpected consequences is now.

Freshwater regulations look to make the next five years the era of the hilltop tank, the hotwire, the electric fence standard, the new track cut to the tank, and the overgrown creek bed.

Farms were shaped by the rules and regulations of the era they were created. Most importantly they are shaped by how landowners and lessees reacted to them.

In the 1850s in Canterbury, settlers seeking a licence to depasture (graze) found clever ways to gain access to large areas. For each shepherd’s hut built, the grazier holding the licence to depasture was allocated a pre-emptive right over 50 acres. Build another hut up the road and you were given another right over 50 acres. Huts sprang up. Each homestead built came with an allocation of 250 acres.

Not all land had to, or could be, bought outright, and grazing leases made your money go further.

Putting up 38 chain lengths of a wire fence (760 metres) gave the grazier rights to graze 50 acres. The fences may not be in a logical spot or even subdivide a parcel of land – it was all about getting more grazing land allocated. Redundant fences are now part of the landscape.

A patchwork of grazing leases and squatter-blocks emerged under the Provincial Councils, set up in 1853. Graziers would run up a fence along the waterway, excluding a piece of land from the water, making it useless for purchasing and grazing by others. Once they made sure no others could graze the locked-up neighbouring block, they would open the fence and graze the land itself, acting as squatters. This meant they didn’t have to buy the licence to depasture and still got the grazing.

Grid-ironing was a known strategy to gain control of a large area of land, without paying for a grazing licence for all of it. Examples were seen in the 1850s to 1870s in Canterbury. Rules were set that land blocks purchased had to be 20 acres or more. The investor would come in and buy a series of 20-acre blocks, leaving 19-hectare areas in between each block.

No-one could buy the 19-acre or smaller blocks without going to auction, so generally they were left unoccupied. Also known as ‘spotting’, the best bits with creeks and flats would be purchased, leaving gaps in between.

Squatters on the land were usually granted first right to buy areas, but not compelled to.

Pastoral land was leased at low rates, with the leaseholder having the right to purchase small areas for cultivation or building a home. This allowed leaseholders to buy fractions of their runs in order to control the rest of the land.

It wasn’t until 1870 that land titles were formally registered with the aid of a map (the Torrens system).

Provincial administrations were abolished in 1876. The Land Act 1877 updated provincial land legislation and created 10 districts, each with a Land Board (Jim McAloon, Land ownership, Te Ara – the Encyclopedia of New Zealand, 2008).

New rules from the government incentivised smaller farms, with a farm homestead or cottage.

A scheme of deferred payments was used to get these small family farms established. By 1892 more than a million acres (404,000 hectares) had been taken up under these schemes by 7687 settlers. Landowners with more than 260 hectares already could not apply. Leases for blocks of up to 5000 acres (2023 hectares) could be repaid over 15 years. The remnants of many derelict rural buildings can be seen across rural New Zealand, especially in areas like Otago, where small holdings were simply not sustainable.

The Liberal Government years saw a swing to middle-sized farms, with applicants for land having to prove they had capital to improve the land. Between 1891 and 1912 a total of 520,000 hectares of land was purchased by the government for subdivision. This land policy had its greatest impact in Canterbury (125,000ha), Auckland (104,000ha), Otago (83,000ha) and Hawke’s Bay (78,000ha). The number of medium-sized farms (130-400ha) increased considerably.

Today’s landowners react to legislation with a similar commercial response. Responses will be innovative, and just like in the 1850s, are likely to have some unintended consequences as far as policymakers are concerned.

vamtam-theme-circle-post
 Category Country-Wide
What shaped farm landscapes in the past and what is driving it now? Joanna Grigg takes...
 Tags Carbon Forestry, Country-Wide Beef May 2022
Read More

vamtam-theme-circle-post
 Category Country-Wide
What shaped farm landscapes in the past and what is driving it now? Joanna Grigg takes...
 Tags Country-Wide Beef May 2022, Editor's Note
Read More

vamtam-theme-circle-post
 Category Country-Wide
What shaped farm landscapes in the past and what is driving it now? Joanna Grigg takes...
 Tags Country-Wide Beef May 2022, Regenerative Agriculture
Read More

vamtam-theme-circle-post
 Category Country-Wide
What shaped farm landscapes in the past and what is driving it now? Joanna Grigg takes...
 Tags Animal Health, Country-Wide Beef May 2022
Read More

vamtam-theme-circle-post
 Category Country-Wide
What shaped farm landscapes in the past and what is driving it now? Joanna Grigg takes...
 Tags Country-Wide Beef May 2022, Livestock, Onfarm
Read More