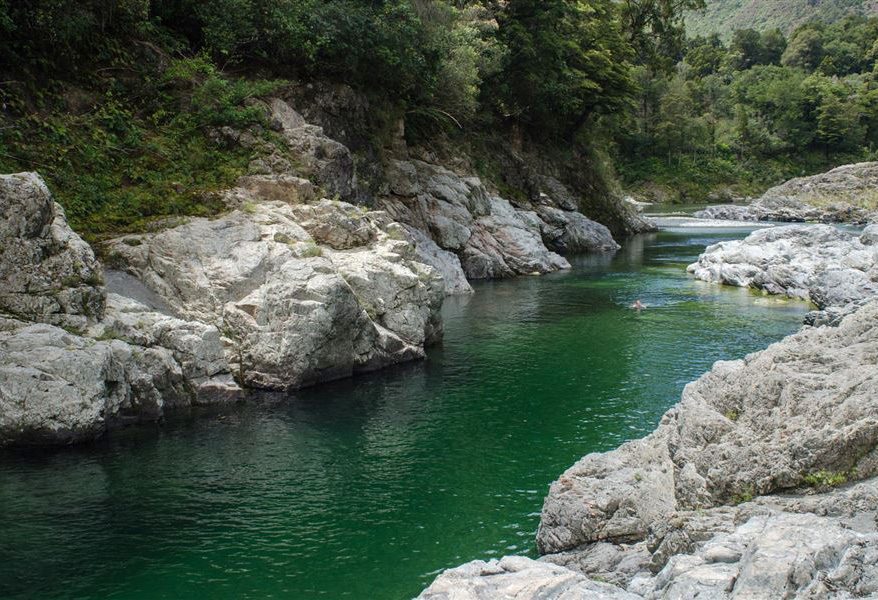 It is part of the Te Hoiere/Pelorus Catchment Restoration Project that has been mapping everything that carries flowing water, whether it flows just one day of the year or 365 days. Anything that has the potential to carry E.coli, nitrogen, phosphorus and sediment downhill into the rivers and out into the Marlborough Sounds. The Pelorus River is the largest river catchment feeding into the Marlborough Sounds; gathering water from smaller rivers and streams on its downward path to the Havelock Estuary. Tiny streams beginning at the top of the surrounding hills travel through bush, forestry, farms, lifestyle blocks, the Havelock township and past baches in the Marlborough Sounds. It all makes up part of a catchment that has now been mapped and measured.

The project which involves the Marlborough District Council, Department of Conservation, Ngati Kuia and the wider community has been chosen as an exemplar catchment by the Government, with more funding directed toward measuring and improving problems identified. Measurements are more detailed to measure clarity, nutrients, sediment and E.coli at more than 100-plus sites spread through the catchment.

Project manager, Heli Wade, says water quality measurements during the past 12 months have established a baseline. That is now being used to create an effective monitoring and evaluation programme that can be used to make improvements where it is needed.

She says it is a 10-year project to do the work and start to see some results, though realistically the benefits will be over a multi-generational time frame. To make it work, the project has involved the entire community which encompasses rural, urban, industry, agencies and anyone who has an interest in the catchment. She says it is about using the skills and support of agencies to help the community make necessary improvements.

“It’s important to recognise the mahi is done out in the community.”

Much has already been done. Farmers near the Rai River were some of the first in the country to work on water quality nearly 20 years ago. Then Fonterra farm environment plans set standards for riparian fencing, crossings and effluent systems, so all that is largely completed.

This is the next step and Marlborough District Council’s environmental scientist, Matt Oliver, says farmers are generally on board and have been asking for in-depth water quality testing so they have better information.

“They wanted to know exactly what the water is like when it enters their property and when it leaves their property. And we couldn’t answer that. What happens to water when it flows through say a forestry block or a dairy block? You can’t manage what you don’t measure.”

To get that information, about 400 landowners which includes dairy farmers throughout the catchment, have been mapping streams on their property using the geospatial analysis of local company, Geoinsight. Matt says the only way to be transformative in an environmentally, culturally and economically safe manner, is to know all the details. That means mapping and measuring all those potential waterways, no matter how tiny.

He admits there is some nervousness among landowners about what that may mean for them, but at the same time they are prepared to do what is needed. Plus, he says mapping, measuring and finding critical points that need attention doesn’t mean farmers have to fence all those waterways. The point of mapping and monitoring is to find out what is happening in the catchment and allocate funding to deal with anything that is identified as a problem.

“There may be tiny little streams contributing well above their size to water quality,” he says. “It doesn’t mean a farmer has to put a fence on it, but we want to know where they are, and we can measure the effect of it.”

He says the National Environmental Standards for Freshwater “changed the game pretty massively” and the Government recognises it needs to fund projects such as The Te Hoiere/Pelorus Catchment project to achieve its goals. Making the project an exemplar has its benefits for landowners as it comes with more funding from both the Government and council to help landowners do their part, including more fencing, more planting, help with maintenance after planting and dung beetles.

From the beginning, Matt says they wanted to involve all stake holders and with that in mind, numerous community meetings were held last year before the project kicked off.

“We didn’t want to turn up and start dictating to people,” he says. “A lot of what we’re trying to do is tailor the work we’re doing towards water quality and other goals to suit the way people work and make it easier for them.”

To date, 10 dung beetle packs have already been purchased by farmers in the catchment and will be placed around their properties this summer. More properties are likely to use dung beetles as more packs become available. One pack of dung beetles – which is suggested for every 300 dairy cows – usually costs $6,000 and deliveries have different species to suit different country. The project is able to get bulk orders for $5,000 per pack and then offers a subsidy of $2,000 per pack to landowners which in effect enables farmers to get the packs for half price.

Matt says the dung beetles offer several benefits from the obvious one of getting rid of manure so that it doesn’t runoff into waterways, to reduced worm burden in the paddock, increased pasture, reduced fertiliser bills and aerated soil for grass roots to go deeper. It can take up to nine years for a colony of beetles to get really established, but he says there’s anecdotal evidence the beetles have beneficial effects much sooner.

“Putting the dung beetles in is just one of the tools we can use and that is why we subsidise them.”

For fencing, the project funds up to $6/m for materials as well as selling the plants at cost price, with the landowner doing the fencing and planting.

“We pay for the maintenance for two years because they have told us that it is easy to put the plants in, but very, very hard to maintain them and get them to grow. So we will pay a contractor to do that work.”

He says farmers are coming up with ideas as well. A couple of farmers are planning on planting decommissioned effluent ponds as artificial wetlands to filter the runoff from farm tracks.

Another is looking at redesigning their paddocks so that instead of a stream dissecting several paddocks, the fences run in the same direction of the stream and therefore reduce the amount of fencing and culverts.

“Farmers are can-do people who are willing to do stuff and we are doing our best to keep up with them.”

The council also has its part to play in improving water quality and is spending money on developing a land disposal system from its sewerage ponds at Havelock.

A second phase of the catchment project begins next year to encompass the wider Pelorus Sound out to the Chedwode Islands.

Beetles to the rescue

Karen Morrison has bought a pack of dung beetles for her 240-cow family dairy farm at Linkwater, with the first of the four-season pack arriving this summer.

She is part of the Linkwater Catchment Group that is now part of the wider Te Hoiere/Pelorus Catchment Project and says it is a group that wants to get ahead of the rules. Six dairy farms are involved with the Linkwater group who work together on ideas and resolving problems. All have either bought packs of dung beetles or plan to buy packs as they become available because they view them as another tool to use for the environment. Karen has a few dung beetles already burrowing their way into dung after hosting a field day where they were released to show farmers.

She is third generation on the farm and the family has been proactive with fencing and plantings over the years, including planting a wet area on the farm with 2,500 native trees. Since the farm has been mapped and measured, another wet area has been identified for similar planting, with advice provided about planting. She says there have been a few areas on the farm highlighted by the project, with suggestions for change, but it hasn’t felt pressured.

Not far away in Canvastown, Michael Shearer says the best part about the project is getting more information about the water coming onto a property and then when it leaves the property.

“You need to know what is there beforehand and what impact you are having. Then once you know, you can find ways to fix it.”

He and his wife, Cheryl, bought their first farm three years ago and milk 180 cows, plus sharemilk with an equity partner on a nearby farm. They have all the main waterways fenced and he knows there will be more to do.

The catchment project is a lot more detailed than Fonterra’s environmental plans and more targeted because it has more information on a large number of sites. He says farmers are generally keen to get things done where it is needed and the way it has been done is creating good healthy relationships with council.

He says it is great to get the financial help for fencing and planting but finding the time to do the work is always hard and the reality is that farmers will do the work.

Getting paid contractors to maintain any plantings will be a huge help because that work usually needs to be done at the busiest time on the dairy farm calendar.