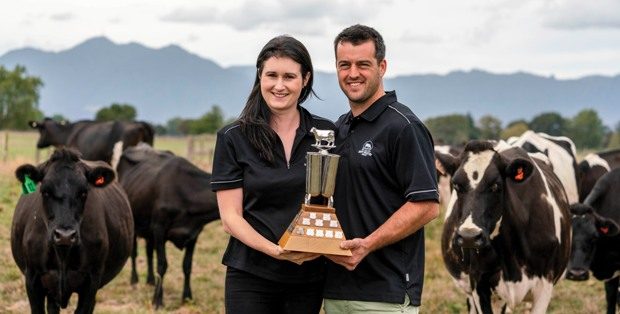 The 2020 Waikato Share Farmers of the Year Aidan and Sarah Stevenson use genetic technology to improve their biggest asset. Their cows.

Aidan and Sarah, both 31, have been milking on Sarah’s family farm for the last eight years, sharemilking for seven seasons. They bought the family herd which has been Genemark DNA parentage tested for 10 years. The 340-cow Friesian/ Friesian crossbred herd has 99% recorded ancestry and they are aiming to hit 100%.

Aidan and Sarah have also used embryo transfer (ET) technology for the last four years to multiply their best genetics.

Their investment in their cows has been rewarded by getting their first contract bull purchased by LIC in December 2017. The bull, Waimata SB Ransom, was marketed in the 2019 genomic Friesian bull team.

“We are humbled to have a bull in the bull team so quickly,” Sarah says. 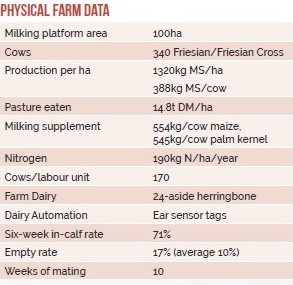 Some of it comes down to luck, but it’s also recognition of making good breeding decisions.

Their herd has always been in the top 10% for Breeding Worth (BW) but has dropped to the top 25% with the recent changes in animal evaluation. The current herd BW is 115 and PW is 134.

As Tatua suppliers, who pay more for protein than fat, they need to find a balance between breeding for BW and profit, Sarah says.

They mate the bottom 30% of their herd to beef and nominate everything else to a mixture of LIC genomic and sire proven bulls.

Investing in ET work has boosted their herd, but also elevated their empty rate this season after getting more embryos than anticipated.

They flushed three cows last year and got 12, 13, and 30 embryos, instead of the 3-5 per cow embryos one would typically expect.

“We ended up with 55 embryos which was a challenge to get them back into our cows,” Aidan says.

“We use natural heats, no CIDRs, embryos have a lower hold rate, and if a cow didn’t meet our recipient criteria she had to wait to cycle again before being mated, so it contributed to our high empty rate.”

They were happy with their 71% six-week in-calf rate despite these challenges.

They invested in ear sensor tags two years ago, which are already earning their keep by helping Aidan identify cows on heat. It eliminates the issue of mental fatigue during mating, especially now they are doing 10 weeks of AI and no bulls are used on the main herd, he says.

The ear tags also measure temperature and activity so they can pick up any health issues earlier and as a result their cow mortality rates have dropped. 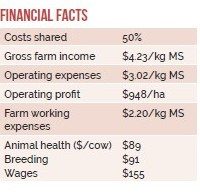 Rearing good young stock is another focus for them after having had a bad experience with graziers.

Now they keep all calves on the milking platform until May 1 and have reduced their herd numbers to make room.

“For us it’s important to nurture the calves and ensure they are reaching those target liveweights,” Sarah says.

They have found a great grazier 15km away who delivers their heifers back in good order.

“We’ve found a former dairy farmer who does a great job and our heifers are coming home over 500kgs.

“If they’re not grown well it puts you on the backfoot, so that’s a real target for us to meet those liveweights.”

Aidan and Sarah first met when they were 15 through mutual friends in Morrinsville. Aidan lived in Morrinsville where his parents own an electrical business, while Sarah lived on her parents’ dairy farm.

After school, Aidan completed a building apprenticeship while Sarah studied a Bachelor of Commerce majoring in Accounting and Commercial Law at Victoria University of Wellington.

They started dating in Sarah’s second year and had a long-distance relationship, which suited Sarah who could concentrate on finishing her degree.

The couple then wanted to go dairy farming so moved on to the family farm as contract milkers for the first season and then bought the herd and went sharemilking.

Sarah’s father died when she was just 12, and as the eldest of the four siblings she helped her mother a lot with the farm business growing up, so it was nice to come home.

“When dad died, mum didn’t even know how many cows we milked. I became her right-hand man.”

The family’s farm consultant Wayne Berry has been with them since they started as contract milkers. He is an independent voice in a family business which is key to keeping things professional. For Aidan, Wayne has helped him tackle the challenges of going dairy farming with limited background.

“Wayne is my farming dad, not growing up on a dairy farm it’s been a steep learning curve. He’s always happy to take my calls.”

Leaving building to go dairy farming has been a great decision for their young family. Aidan and Sarah have three children, Emily, 5, Jacob, 4, and Zac, 10 months.

“If Aidan was building now he would be leaving home at 6am and not get home until 6pm and wouldn’t see the kids,” Sarah says.

Instead of the Monday to Friday grind, there is always another day with farming and he can prioritise family, Aidan says.

“With farming I get to have breakfast and lunch with them most days and can go into school during the day to watch swimming sports or whatever is on.”

The couple entered the Dairy Industry Awards for the first time last year because they wanted to make sure they weren’t being complacent and were running the business the best they could.

“We wanted to push ourselves out of our comfort zone,” Sarah says.

“We wanted to seize the opportunity to identify any of our weaknesses in our business.”

It was also a great networking opportunity to try and secure another sharemilking position or to lease land in the future.

Some of the feedback last year made them look at their recruitment strategy and focus more on the people they employed in their business.

“We’ve changed our recruitment process to get the right person,” Aidan says.

“We have since hired our farm assistant Kevin Garaway who is really passionate about the dairy industry and who also wants to progress. Having good staff makes every day easier.”

Last year in their presentation to judges they didn’t personalise the people in their business enough and so to turn that around and win the DairyNZ Human Resources Award was a huge milestone for them, Sarah says.

“One of our downfalls last year was that I was too focused on winning the Business Performance Award. This year I shaved 10 minutes off that section in our presentation to make more time for other sections,” Sarah says.

They have a Farm Environmental Plan which they treat as a living document in their farm business.

“We refer to it all the time to improve the sustainability of our business. We have documented hotspots on the farm and we have brought actions forward.”

Being on their family farm does make it easier to prioritise the environment.

“We are thinking more big picture. We are the guardians of this land on behalf of the whole family.”

One of the biggest takeaways from the competition has been to learn more about what each other does in the business, Sarah says.

“Nitrogen conversion rates mean a lot more to me now. That learning has been invaluable.”

Sarah has been a member of Chartered Accountants Australia and New Zealand since 2014 and has maintained her qualifications while having a family by working two days a week for a Matamata firm, although she is currently on maternity leave.

“I enjoy working with farmers to understand their numbers, especially when they light up, when they get it.”

The couple are looking for a second sharemilking job or to lease land around them to expand their business.

“When the next opportunity comes along we are ready to take that next step.”

They bought a rental property in Mount Maunganui in 2016 which has already seen a capital value lift.

“Aidan’s skills in building means we can consider diversified investments outside of the dairy industry, such as housing,” says Sarah.

Even onfarm, Aidan’s building skills help to keep capital costs down as he can do a lot of building and framing work instead of paying contractors. Their ultimate goal will be farm ownership, whether it is the family farm or somewhere else.

“We would love to keep the farm in the family, we are putting a lot of thinking into how that would work for everyone.”

Runner-ups in the Waikato Share Farmer were Hayden and Kate MacPhail, and Kirsty Dallinger was third.