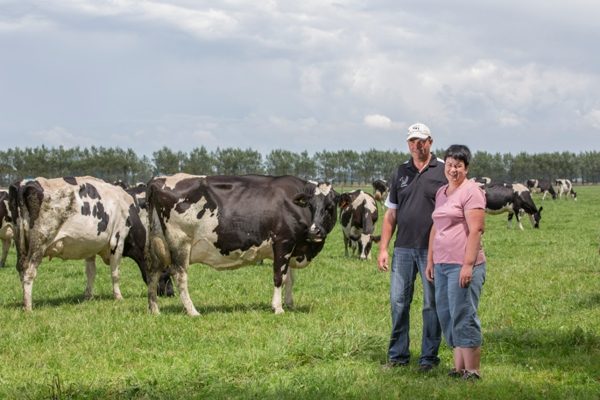 A cow with right shaped udder has the money-maker that will keep her in the herd. Anne Lee reports.

If the rumen is the power house of our bovine friends the udder must be her money-maker, so breeding for a great udder isn’t about winning beauty competitions, it’s about making sure she’s equipped to produce well, stay in the herd and be comfortable at the same time.

Avoiding splayed or crossed teats and traits that can lead to a low hanging or poorly supported udder can be done with breeding, but you need to know what you’re looking for when it comes to the herd and the bulls you’re selecting.

Canterbury dairy farmer and Holstein Friesian breeder Tony O’Connor is chairman of the Traits other than Production (TOP) advisory committee and says of the 13 traits scored almost half are udder traits and where the most emphasis is placed.

“It’s definitely not about a beauty competition – if an udder is set up so it’s functionally correct you’re going to increase the chances she’ll be in the herd longer.

“The cups are going to sit comfortably and correctly on her, so the risk of teat damage and somatic cells is lower, she’s not going to be kicking the cups off during milking and the quarters are going to milk out properly.

“If she’s walking long distances and her udder’s hanging down and she’s kicking it as she walks along – that’s not going to be comfortable at all for her.”

Breeding cows with the ability to produce well but, just as importantly, have good longevity and be good commercial cows has been a passion Tony inherited from his late father Basil and mother Shirley who owned Ronnoco Holstein Friesians.

‘It’s definitely not about a beauty competition – if an udder is set up so it’s functionally correct you’re going to increase the chances she’ll be in the herd longer.’

They converted their Seadown property to dairy in the 1960s and Tony’s mum remembers Tony taking a keen interest in pedigree herds from when he was just four years old.

At nine, having saved his hard-earned money and, as Shirley recounts, “consuming and digesting the Ashley (stud’s) catalogue”, he gave his parents strict instructions to check out Ashley GP Echo at the sale and make the purchase on his behalf.

That cow became the foundation of his own stud, Tronnoco.

Tony and Keri stepped up to 50-50 sharemilk the property in 1996 and by 1999 they were able to buy and convert their own 66-hectare block neighbouring 65ha of the home farm, putting in a 40-bail rotary farm dairy.

Over the years the family has added to the property, even purchasing a 50ha block as a runoff that had been Shirley’s original family farm.

Tony and Keri own and milk 500 cows with 200 of them autumn calvers which supply Fonterra on a winter milk contract.

The whole herd averages 620-650kg MS over a typical 292-day lactation with a number of cows having produced more than 800kg MS/cow in a season.

Pasture management is a focus to ensure cows firstly get high quality pasture with an average 1.8 tonnes drymatter/cow/year bought in as supplement to feed both the spring and autumn-calving cows.

Maize silage and a grain mix account for most of the bought-in feed.

With such high levels of production, Tony and Keri’s cows must have udders capable of supporting what can be a significant weight of milk, particularly as they walk to milking twice-a-day.

There are five udder traits which are scored individually but also considered together to give an udder overall score.

The five traits are:

For the first three traits, the higher the score the better, while for the front and rear teat placement traits a mid-score is best.

But the TOP committee and Animal Evaluation are also looking at new traits which may be included.

Teat length is one and has come from industry feedback not just breeder input.

“There’s concern over teats that are too short – they make it difficult to get the cups on properly and to get them to stay on,” Tony says.

Udder support combines two traits – the strength of the median suspensory ligament, which dissects the udder lengthwise, and udder depth.

“The suspensory ligament attaches to the abdominal wall, runs through the udder dividing left from right and hooks up to the pelvis. It’s the primary support for the udder.

“When looking at the cow from the back end the aim is to have a well-defined cleavage, a defined line running between the left and right quarters demonstrates a strong ligament.”

From the side view the udder should be held up tightly with the front and back quarters even in terms of depth.

“You don’t want to see the back quarters hanging lower,” Tony says.

Walking to milking is going to be a lot more comfortable if the udder is held high.

From a side view the front portion of the udder should be blended onto the body wall at a slope that’s neither too steep or too long.

“If it’s too long it means there can be too much tissue there that’s not necessarily mammary or milk producing tissue and if it’s too short the udder is at risk of being poorly supported at the front so it drops down and you get all those problems you get with a low hanging udder – damage to the udder and difficulty with getting the cups on so more mastitis and high somatic cells.”

“From the back end you’re wanting to see the udder attachments are high and wide.

“If the attachment to the cow is too low or too narrow it’s not going to do a good job of holding up that full udder.

“I liken it to holding up a shopping bag – if you only have hold of one handle or if you’re holding the handles too close together you’re not going to hold has much as if you have a grip of both handles and you’re holding those handles out widely.”

The three characteristics – udder support, fore udder and rear udder are all part of making sure that the udder can hold a lot of milk and support it well so that the udder remains nicely intact, not just through the peak milk production period or when the time between milkings is extended (once-a-day or 16-hourly) but also over repeated lactations.

It will also become more of an issue as more is expected of cows on an individual basis.

Nutrient and financial pressures are seeing a reduction in stocking rates in some cases with the aim to maintain per hectare performance by lifting per cow production.

“We’ll see a drive to get more per cow production start to test cows that might not have been challenged before in that sense,” Tony says.

Teat placement relates to where and how the teats sits within each quarter.

“It’s what we call a two-way trait in that we want it to be mid-scoring – a five or six.

Low scores mean the teat will be pointing outwards which can cause problems for the cups to stay securely on.

“We also want the teat to sit right in the middle of the quarter. That gives us a good drainage point so the milk comes nicely to the centre and will drain right out.

The ideal siting of the teat on the rear quarter is the same as it is for fore teat placement.

“Teat placement is a bit like where you put the spout on a funnel – if it’s off to the side it’s not going to work properly – it’s going to be harder to empty.”

“An eight for rear teats means they (the right and left rear teats) will be touching and a nine means they’ll be crossing over. That’s going to make getting cups on and keeping them on difficult. It could lead to teat damage and somatic cells and mastitis problems.

“It’s not going to be comfortable for the cow either.”

Top scores for udders aren’t directly considered in calculating the breeding worth (BW) but they do indirectly have a link via the impact they have on longevity breeding values(BV).

How well famers can use TOP scores will depend to a large extent on the level of voluntary culling they can do, which is primarily determined by reproductive performance.

Cows with poor udder traits are likely to end up on the cull list sooner rather than later because of mastitis issues, problems in the farm dairy because milking is uncomfortable for them or because their udder has “blown out”.

“If farmers recognise they have a problem they want to correct they can look at the scores for the bulls they’re using. Udder traits are heritable, so they can be corrected.

“But it also means that if you’re keeping heifers out of these cows and you’re not taking any notice of the scores that go along with the bull, you may very well be carrying the problems through or even making them worse.

“Culling them is dealing with the problem after the fact, whereas looking at TOP scores is something that can be used as a predictive tool – it’s dealing with it before it becomes a problem.

“You can have a cow that’s a top producer in her first or even second lactation but she’s not going to last because her udder traits mean she’s getting mastitis regularly or her udder’s blown out.”

Breed societies carry out TOP assessments with the full scores provided to the farmer.

If that’s been carried out, breeding values for those cows will be calculated by Animal Evaluation but at the moment the only way to get that breeding value information is to purchase a traits evaluation report, get a three-generation pedigree or pay to be part of a selective breeding programme where sires can be nominated.

But Tony says that while the BVs might not be readily available the raw scoring data is still useful to a farmer so they can steer clear of bulls that could be exacerbating a problem they have in the herd.