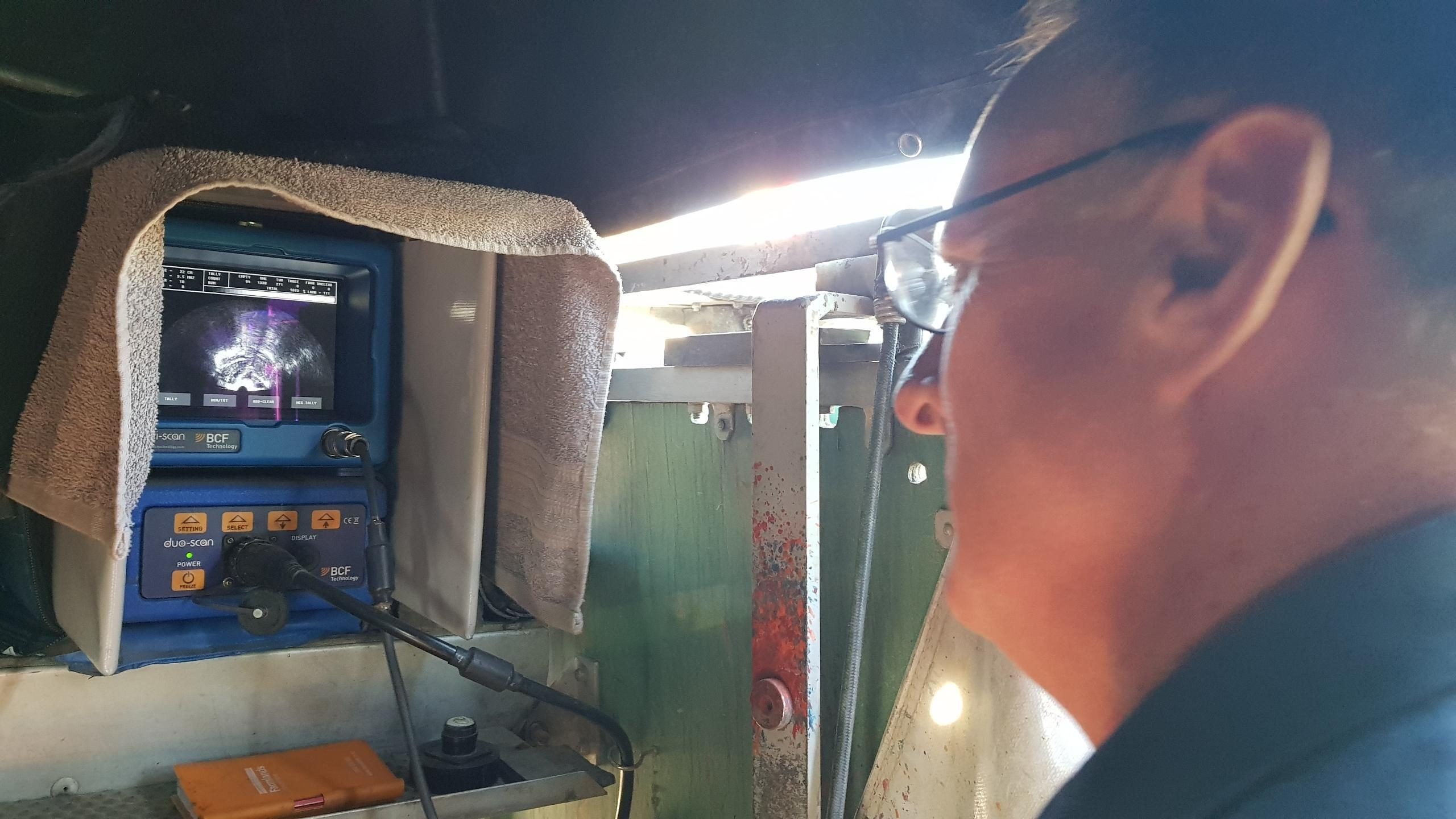 I made the temporary job switch from journalist to offsider to get away from my computer screen and deadlines, and back to some real-life hands-on farming.

My job description was ‘worker’ and my main tasks were shoving ewes into the crate for scanning, ‘dotting’ them with raddle on backs or nose according to their pregnancy status, and generally making sure the sheep kept coming.

It was a mind numbingly repetitive job, although boss Blair Stewart frequently reminded me that I was “living the dream”.

My typical day from mid-June until early mid-August started with a 4.15 alarm wake-up, then pick-up and travel to far-flung woolsheds and yards throughout the Central and West Otago regions.

After arrival in the dark at the destination in sub-zero temperatures the set-up process started: on with a headlamp then up onto the trailer to help lug off the crate, panels, pins across muddy yards to set up for scanning.

A tolerance for cold hands, cold feet and freezing cans of raddle were unwritten expectations as was the ability to deal with the quirks of different sheep. At one end of the spectrum were sulky Merinos that on a bad day had to be physically pushed and shoved in and out of the crate; at the other extreme were turbo-charged run country Perendales hell-bent on head-butting anything and anyone in their way.

My tales of woe would lead you to believe I hated every minute of my temporary work status but the weird thing is that despite the cold, the early starts, the mud and long days I generally enjoyed the job. Knowing it was a temporary gig helped but I liked being the anonymous worker and observer of the everyday stuff that goes on within farm gates around the countryside.

The smokos and lunch were always a highlight as were the random topics of conversation, and the occasional off-colour story.

The dogs were another source of entertainment. Most were good and keen; the names of the not so good were etched on my brain by the end of the day.

I worked for Scan Central owned by Blair Stewart who’s been in the business for 25 years. As well as ewes he scans beef and dairy cows. Blair, along with three sub-contractors scan thousands of ewes throughout Otago. The season kicks off in June with crossbreds and finishes in August with halfbreds and Merinos.

He spends several weeks in the lead up to the season putting together a scanning roster. It’s a juggling act based around ewe mating dates, mob sizes and farm location. Coming up with the perfect plan is impossible because there’s always someone who wants to change their date at the last minute, or someone who leaves booking in till the last minute. It happens every year and usually it’s the same repeat offenders .

“They forget that with scanning there is no tomorrow. There’s a very limited window for accurate scanning which is why we have to get the job done as quick as possible and move on to the next,” Blair says.

Typically, farmers will put shearing ahead of scanning which in his view is the wrong way around.

“With shearing another week of wool growth doesn’t make a lot of difference, but holding off scanning for a week can make a big difference.”

Scanning is a mentally and physically demanding job. To get an accurate image means getting good contact between the scanning probe and the skin on the right hand side of the udder which is hard physical work, especially on the denser-woolled halfbreds and merinos. The intensely repetitive shoulder, arm and wrist action can wreak havoc on the body, so too can prickles and thistles in the belly wool. It takes concentration to quickly decipher what’s on the screen and work out the pregnancy status of a ewe. Then there’s a strange co-ordination sequence of recording the number of lambs with a button on the hand control while foot operating pneumatic gates to draft the ewe into the right mob.

Of course, farmers aren’t interested in the process and the aches and pains involved, what they want are the results and how they compared with the previous year.

“We do the job and give them the results but how they use them to maximise production is up to them.”

They also want to know how they compare with the neighbours, a question that is deflected with a standard “not bad” reply.

At most of the farms I went to twins, single and dries plus ‘early’ and ‘late’ lambing ewes were identified. For the record this year’s scanning percentages were slightly back, especially so in Central Otago where farmers had less-than-usual feed on hand for flushing due to the dry autumn and Covid-19 which left them stuck with lambs they couldn’t send away.

MAKE SCANNING COUNT
B+LNZ has a number of suggestions on how to practically use scanning information: culling dries and priority feeding of multiple lambing ewes is the obvious. Good feeding of multiples during lactation should help ewes wean a heavier weight of lamb and increases their chances of having multiples the next season.

Scanning information can also help quantify losses between scanning and birth or tailing. Some farmers use scanning to condition score ewes, taking off lighter weight ewes for priority feeding.

PLANNING FOR SCANNING
The optimal time for scanning is between days 70 and 100 of pregnancy, if it’s held off beyond this time it’s usually difficult to accurately decipher twins.