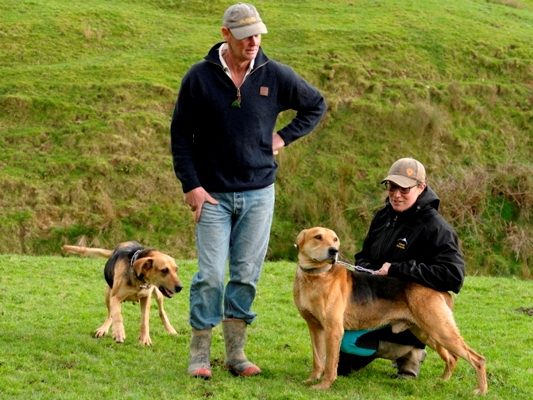 A Manawatu sheep and beef farming couple who recently bought their third farm give Jill Galloway their farming operation recipe.

Mark and Ollie Duffy are big fans of same-day killing. That and consistent grading is the main reason they have sent most of their lambs to the ANZCO plant in Marton for the past 10 years.

“ANZCO always seems up there with its pricing. The same-day kill helps with a higher dressing out percentage.”

The couple are running Romneys with Suffolk/Texel cross rams across 1800 ewes in the terminal sire mob.

Depending on the season, their lambs kill at about 19kg carcaseweight (CW) in spring and hit 21-22kg by autumn. About 3000 lambs will have been processed during this period, all fattened on grass and a chicory crop.

“That cheers you up.”

‘I probably should have used the degree a bit more wisely, but it wouldn’t have been so much fun.’

He’s making the most of the higher prices but he’s not getting carried away.

“You’d be mad to put it in the budget for next year.”

The animal liveweight is 620kg/ha and Mark says it is hard to come up with a meat weight per hectare as the Duffys have been in expansion mode for the past three years.

He says the draft off the mother was 35kg, rising to 40kg for summer lambs, then rising again to 48kg for autumn/winter if the season allowed for that.

Five years ago, Mark and Ollie were farming in partnership with both his parents, Lloyd and Fiona. Three years ago, he and Ollie bought his parents out of the home farm at Ararata, near Hawera.

Ollie grew up on a farm, and the family had been near Hawera 39 years.

“I always loved helping on the farm. I did a BBS in agribusiness at Massey University.

“The original family block was only 230ha then we leased some land.”

He did casual work, shearing and reared calves for a few years to build equity to buy the block next door.

“I probably should have used the degree a bit more wisely, but it wouldn’t have been so much fun.”

The Duffys work the farm in Ararata near Hawera, with the help and support of Mark’s father, Lloyd.

His parents still live just up the road on 20ha.

They have a manager, Reed Connors on the Dannevirke farms and Mark goes over every three weeks which is a three-hour trip.

“Being off the place keeps him fresh,” Ollie says.

Almost everything is finished to a slaughter weight, although some bulls are sold as dairy service bulls.

Hoggets which don’t get in lamb are retained.

Mark and Ollie say lambing dates are complicated, with two dates for lambing in Dannevirke and two at the farm. Spreading the lambing is some insurance against the weather.

A few lambs are weaned straight off mum and sent for slaughter.

They get one cut of about 800 lambs off the Dannevirke operation and a handful goes from Ararata, but most are weaned in December and are trickled to the meat plant from there through to winter.”

They buy most of their rams from ARDG (Advanced Romney Designer Genetics) from Craig and Tina Alexander in the Waikato.

They like the fact that rams are challenged for facial eczema.

“We need rams with FE resistance. It’s a big issue here in Taranaki and getting worse each year,” Mark says.

They also buy Romney rams from Manawatu’s Forbes Cameron for the Dannevirke farm and say the lambs seem to have good survivability.

“Twins are okay, but I am not keen on triplets.”

About 100 triplet-bearing ewes are at the Dannevirke farm with a similar number on the Taranaki farms.

He says some ewes can rear three, but it takes a very good ewe to manage that.

“I tried lots of recipes to get them to survive.”

Ewes carrying twins or triplets are preferentially fed. All ewes at Ararata go on swedes for a period of winter.

At Ararata, soils are volcanic and hill country – Dannevirke it is hill country too, but the soil is limestone.

Ollie says the home farm at Hawera, is long and disjointed and that presents problems.

The good paddocks are out the back of this farm.

“We could calve cows out there. But checking on them twice a day, would take ages.”

They leave the ewes to lamb, and don’t do a lambing beat.

“I glance, notice and deal with any ewes that are cast, or have a bearing. You have to be careful not to save one lamb, and mis-mother others and kill three,” Mark says.

They had 41ha of crops going into mainly chicory, 6ha of kale, 3.5ha of fodder beet and 7ha of hill country going into swedes, sown by helicopter.

Cattle are an important part of the operation.

There are 170 cows, 250 two-year-old bulls, plus younger bulls and heifers.

Most of the cows are Hereford with some Angus cross and Charolais. They kill two-thirds of the offspring of the Charolais cross at 18 months

Mark says they calve earlier in Taranaki, so a truck has taken calves over to Dannevirke.

The plan is to raise the Friesian bulls to slaughter weights.

“It gives us options.”

Mark says the older bulls are the slack in the system. If it is very wet, or dry, they can go to slaughter and take some pressure off the farming system.

“In a good year bulls don’t go until November. In a bad year that could be January.” But the 250 two-year-old bulls provide the flexibility and can be killed at any stage.

Ollie says when the grass grows in spring on the Hawera farm it bolts away.

“We grow a massive amount of grass which goes from winter rates of about 10kg of DM/ha to about 70 or 80,” Mark says.

But Mark says it is lower at the Dannevirke farms.

“We did put 900kg of super on in the first 12 months, which would have given it a kick in the guts.”

Now they are using DAP in autumn on all blocks as well as some nitrogen/sulphur on easy country in spring.

He says Taranaki is FE and internal parasite central, while the Dannevirke farms are at a higher altitude and less likely to have such issues.

He doesn’t faecal egg count and goes on eye instead.

“I spread the drenches out for ewe lambs as much as I can, but in the higher country, Dannevirke, we need fewer drenches.”

He drenches the lambs every four weeks.

“All ewes in-lamb to a terminal ram get a bionic capsule, as do any in–lamb hoggets. Any lighter or younger ewes might get a drench pre-tupping but that is it.’

Mark has been farming for more than 20 years, Ollie 15 years and both love it.

Mark finds time to coach rugby at the school their two children Ben (12) and Casey (9) attend.

Ollie says the children collect possums for pocket money. Ben always gets his sister Casey to carry them home. “She’s a tomboy and is not scared of anything.”

It has been hard for his parents, selling the farm to Mark.

Mark says Dad is 74 now, but he keeps an eye on the stock and the fences. He still has a real interest.

“It is always tough handing on a farm.”

When it comes to the future, they want to consolidate, with three different farms on the go, they are still learning what might be best.

They have a big mortgage and interest is 25% of their gross farm income.

“It is amazing how that motivates us,” Ollie says.

They also like to benchmark themselves against top farmers through discussion groups.

The couple work hard but also take much-needed time out.

They would like to spend more time with the children in the next few years.

An eye dog pup plays with their Jack Russell, Mitchell around the back porch.

It might be a dog trial star of the future.

Mark’s passion may be the farm, but he loves dog trialling.

He is very successful and his dogs are totally under control. They are jumping out of their skin, as he works them on in-lamb ewes.

He says there is not enough work for them at this time of year (winter).

“There is probably enough work in the whole North Island during winter for two huntaways in total.”

When it comes to dog trialling, his huntaways are winners and he has won two North Island titles.

His top dogs are Vella and Shield.  They were bred by a neighbour, the late Graeme Dickson, a dog trial man of note.

They now breed their own pups and trialists give each other pups.

One near Hawera of 450ha and two near Dannevirke of 620ha

10% is cultivatable, the rest hill country

All farms run as one operation

200 Friesian bull calves to be reared

All stock finished ready for slaughter