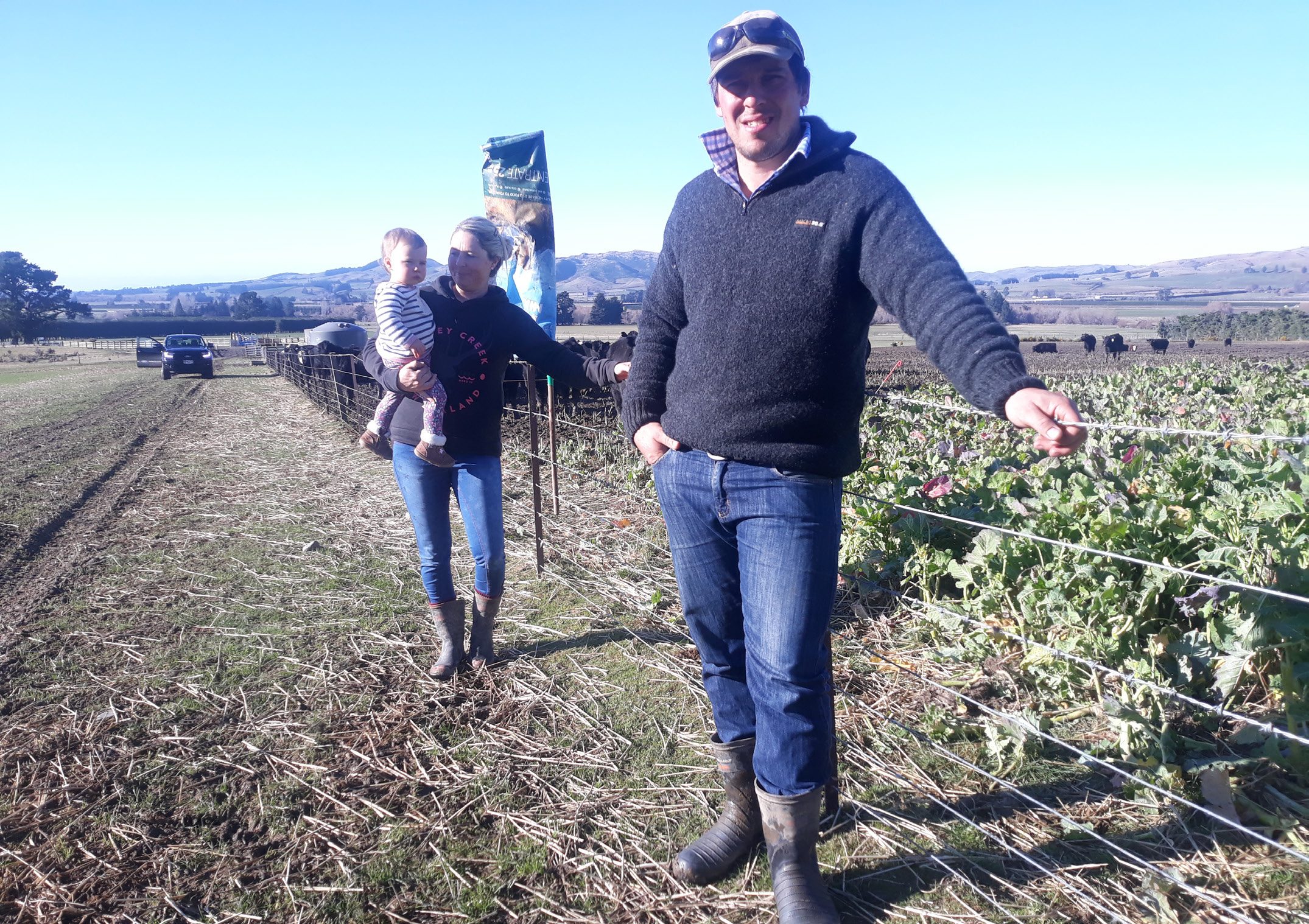 Leasing for sheep and cattle is money in the bank for Banks Peninsula-bred Edward Harrington, a Cantabrian expanding across the plains.

Four years ago Edward and his wife Jenna took up a lease near Springfield, under the foothills of the Southern Alps. It’s one of three properties they lease, in addition to a down-country block at Leeston and a third on Edward’s beloved peninsula.

Edward is from a Banks Peninsula farming family and Jenna from a rural English town in Cornwall. Edward’s parents sold up the majority of their farming land that adjoined their Takamatua property when interest rates spiralled in the late 1980s. “We had a couple of hundred acres when I was a kid so I liked farming and used to go and watch the old man kill the odd sheep in the weekend or help feed out. After leaving school Edward went shearing for a couple of years, did a bit of casual work and then had eight years as a fulltime stock manager.

He had six or seven hundred ewes on the peninsula as well so he looked after them in his spare time, or at weekends. Then by the off chance one weekend a shearing contractor asked if Edward could help him shear at Leeston for the current lessor there. “I happened to ask if he was interested in leasing and sure enough he was. Then once I had that lease which started January 2017 I shot out there and did that after work as well.”

The final piece of the leasing picture was the Springfield block. It was a grass market for sheep and cattle when Edward and Jenna arrived in October 2017 so they made balage, grazed cattle and hoggets until buying ewes at the next round of local ewe fairs. They fattened thousands of lambs in their first year at Springfield, using the HRL Alliance scheme, by which HRL paid for the lambs and Edward killed them back at Alliance, taking a margin on the way out. With their interest rates lower than bank money it was a no-brainer. “That was a big help to us, not having to outlay capital but we took the big whack, the lump sum at the end.”

The Springfield farm is the home base, running 2000 Romdale ewes and 200 Angus cows, as well as 120 ewes and rams in a Dorset Down stud. Their three farms run 7500su on 1200ha and Edward and Jenna do as much as they can themselves, with help from a few casual staff.

The couple are saving for a deposit to buy a house or lifestyle block in the next couple of years so every dollar counts: Edward jumps on the third stand alongside the shearers and does 250-300 sheep a day to save money.

As an earner he prefers lambing ewes to lamb trading or dairy support. “I know dairy support creates cashflow but then at the end of the lease you’ve got nothing to sell. In a leasing situation we need the best product available to the market when we leave the lease.”

The properties have good seasonal balance: Springfield is cold till later, Leeston is warmer and drier earlier and the peninsula block is somewhere in between. Lambing starts at Leeston end of July so that creates cashflow through November and December, just as the peninsula cranks in December/ January and Springfield kicks in January and February.

This year Edward tweaked his system, running an on-farm lamb sale in early February through Hazlett livestock, which sent all their young stock out the gate for $106 a head, leaving only a handful of lambs. Since 2017 all the hoggets have been sent on grazing to the same grazier to get them off the farm for seven months before being brought back to lamb at Springfield. Their lamb covers the grazing cost in a roundabout way which gives some flexibility for the other classes of stock to get preferential feeding without having them on farm. Top end steer calves are sold at weaning in April and the balance are carried through and sold in October which helps with cashflow, hitting the right markets. All yearling heifers are also mated and surplus ones are sold in April each year with annual draft cows.

As a leaseholder, he accepts risks ingrained in his business, like having assets tied up in livestock. Last year was his best for lamb survival and calving, though sheep scanning is back this season and there was a nasty dry spell on the peninsula, followed by flooding at Springfield in late May. He’s well aware of the danger of having so much investment tied up in livestock. “In that flood we lost about 30 ewes. It’s only a small number compared to what some lost in sheep and cows but there’s six or seven grand from a bit of water going down a creek, picking up the ewes. That could have been 300 ewes or more.”

Risk is ingrained in leasing but every lease is different, including the terms. “I know that out on the peninsula it’s done per stock unit but recent leases that I’ve seen advertised have been per hectare. There’s guys paying extravagant money per hectare but they’re all putting dairy support on, which generates a $10-$15 a week income for heifers or cows, or whatever you want to graze.”

But Edward is wary of the flip side, that you’ve paid a lot of money out, with nothing to sell at the end of it. “We can come out of any lease if they ever wind up selling capital stock. At today’s market they’ve been fetching $220-$250 a ewe as capital stock, plus your cows are up to $1500. So that’s all money in the bank that’s literally come from breeding your own stock and keeping numbers up. So, if the leases were to be wound up at some stage in the future there could potentially be over a million dollars worth of capital stock sales.”

On that basis he’ll happily stick to sheep and cattle, playing the long game. If he had any advice for an aspiring leasee it would be to keep an eye on the long term. Good relationships require give and take from lessee and lessor alike, he says.