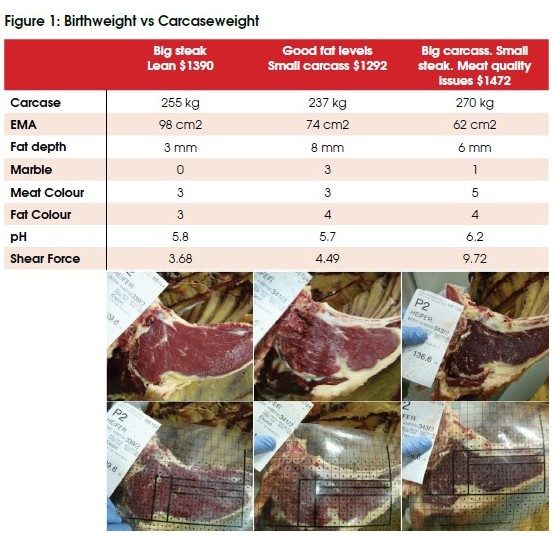 Latest results from the Beef + Lamb New Zealand Genetics dairy beef progeny test show that up to 45kg of additional carcaseweight can be achieved by mating dairy cows to the right beef bulls.

Across the 2016 and 2017 seasons, 39 Hereford and 34 Angus bulls were mated via AI to crossbred dairy cows at Limestone Downs, Port Waikato. The resulting calves were run in large mobs until finishing at 23-31 months at an average of 500kg and 600kg liveweight for heifers and steers, respectively.

Based on their estimated breeding values (EBVs), bulls were selected for lighter than breed average birth weight, gestation length and 600-day weight.

With gestation length and 600-day weight, bulls were selected with a range of EBVs, to assess the relationship between EBV and actual performance, aware the dairy farmer wants a short gestation and the beef farmers wants heaviest carcaseweight.

Earlier reports out of this progeny test show Beedplan EBVs are good predictors of birth weight and gestation length. None of the test’s bulls caused calving difficulty when used over the cow herd.

Calves were hand-reared and weaned at 90kg. At three to four months old – weighing a minimum of 100kg – they moved from the dairy unit to its sheep and beef farm.

At four months old, calves were allocated to their lifetime mobs – based on weight and sex – where they remained until processing.

Once the mob average reached target weight, that mob was processed as a group at Hamilton’s Greenlea Premier Meats. The requirement for all cattle to go in a group meant there was considerable variation in animal liveweights.

An impressive 97% of 1017 cattle graded P2, and the remainder were L2. Carcaseweight and dressing-out percentage were affected by sire, as was eye muscle area. Therefore, for carcases of the same weight, the proportion of weight in the high value muscles varied among sires.

Of the 1017 animals processed, none were downgraded for yellow fat. The majority scored 3 on the fat colour 0-9 scale (higher is more yellow, and less desirable). Sire did not affect fat or meat colour, or ultimate pH.

Marbling was low overall (mean 0.9), with few carcases exceeding 1 and none exceeding 3 on the marble score 0-9 scale (higher is more marbled). However, there was considerable variation among sires. The best sire achieved a progeny mean of 1.6, compared with 0.3 for the worst sire.

Meat samples were taken from 371 cattle, as a random selection of progeny from a selection of sires and dairy-beef meat quality held its own against traditional beef.

Most sires followed the expected pattern of heavier calves at birth growing to become heavier carcases (see Figure 1). However, there were some sires that produced above average carcases, despite their progeny being born at below average birth weight.

There was a spread of carcaseweights at any birth weight. This means that a dairy farmer wanting calves to be born in the 36-37kg range can select sires that achieve this, but these calves could vary by more than 30kg in carcaseweight.

The key is to target the EBV for birthweight and 600-day weight.

It is worth noting that, while four-day-old calf weight (as indicated by birthweight) is a better indicator of finishing performance compared to no selection criteria at all, there is still large variation in carcaseweight for any range of birth weight. Ideally, rearers should buy calves through established relationships, where they know a good growth bull has been used.