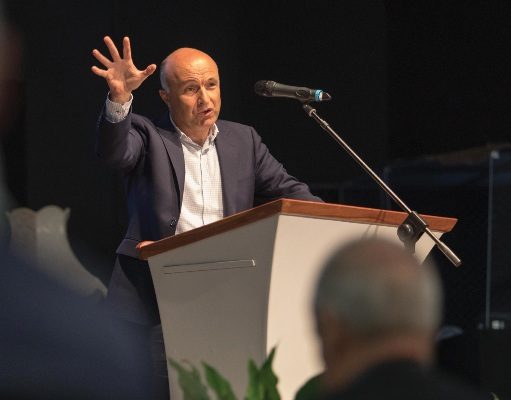 Low footprint farmers should be rewarded, Ministry for the Environment director of water Martin Workman told a group of farmers and growers in October.

The Ministry had received more than 10,000 submissions with a week to go on the freshwater proposals, and there was a lot of messages coming in around how low footprint farmers would be treated in the package, he told the Bay of Plenty Future Farming Symposium, an event organised by a sub-committee of the Bay of Plenty Ballance Farm Environment Awards.

“We are getting that feedback of how we need to get those high polluters down – providing flexibility for lower intensity farmers is something we want to do some more work on.”

More work needed to be done to get that right, he said.

Workman said hundreds of farmers and growers had turned up to freshwater meetings across NZ and the biggest concern he heard was around the lack of certainty for their businesses.

“We need to get these plans in place at a catchment level so that farmers can have that certainty, so they can have a plan on where they need to get to and how they get there.”

It had become clear there was more information and data to come through and it would need to be considered in amendments by the independent panel before a freshwater policy would be finalised early next year.

Farm Environment Plans would be a critical part of the package, and would also include agricultural emissions, Workman said.

People buying New Zealand products are wanting to know where the products are coming from and how they are produced, and credibility of those farm plans was crucial to the NZ story.

“A part of the driver of these proposals and what we are doing in water, climate change, is how do we build our brand and our story as a country going forward.”

The aim of the Bay of Plenty Future Farming group was to get farmers and growers from across the agricultural sector together on environmental issues, chairman and sheep and beef farmer Rick Burke said.

“We want a pan-sector approach to the challenges ahead, rather than acting in a silo,” Burke said.

“We believe success will be at a sub-catchment level, from the bottom up, empowering communities to work together and for farmers to be in control of their own destinies.”

“My view is that the solutions to local problems are best resolved by local people. There is place for national policy, national regulations, but come back to the people who understand their catchments and sub-catchments better than anyone else – the people who live in those catchments.”

Ecological health and what that looked like at a catchment level was different across NZ. A strict bottom line didn’t always correlate with ecological health in some waterways.

“In some geographical areas you can still have ecological health without going down to 1mg/L DIN (the suggested dissolved inorganic nitrogen figure).”

It was important to have catchment and sub-catchment objectives for water quality and what that looked like.

That same approach had to be taken to the stock exclusion proposals, he said.

In some cases where community initiatives had carried out fencing and riparian planting, they should not necessarily be asked to shift that fence, he said.

“In my view, the decision around where to put fencing is best left to the people who understand fencing, who understand the topographical nature of their farms, rather than a central directive out of Wellington.”

Leeder outlined some of the issues council had submitted on. A big discussion within Bay of Plenty council was a concern around resourcing. Under the freshwater proposals Farm Environment Plans would be mandatory and would be audited.

Bay of Plenty Regional Council was already under resourcing pressure. It received 3500 calls through the council’s pollution hotline last year, a 20% increase on the year before. Auditing these plans and/or putting the plans together would require significant resources.

“We have a challenge ahead of us.

“We’ve estimated that it will be fulltime work for 12 or more new Bay of Plenty farm planners to deliver these farm plans.”

Industries are already working with farmers on environment plans which should be used and altered if necessary, he said.

“If we want these farm plans put in place in a relative short time, my view is pick up the farm plans from industry. If they have to be improved or bolted on in terms of extra requirements, do that, rather than redesigning the wheel.”

Implementation would be high and a cost to the region and revisiting farm plans every two years to audit farmers was not a good option.

The council would be recommending that auditing should be done on a grading scheme. For example good performers, shouldn’t have to be audited for another five years.

“And it’s not a job for a recent graduate.”

Leeder said he was onboard with the proposed changes to the Resource Management Act for councils to enable faster plan-making process.

The Lakes Rotorua Plan Change 10 started in 2003 and was still before the Environment Court under appeal, Leeder said.

“We have spent millions and it’s still not concluded.”

The future for dairy was positive, but it would need to modify the way it did things, he said.

The focus had been on production and it was an issue the industry and government had to address.

“We have to recognise the dairy industry since 2000 has been production-pushed as opposed to market-pulled. The reason behind that was DIRA.”

vamtam-theme-circle-post
 Category Dairy Exporter
The next generation of farmers won’t have capital gains opportunities, so will have to focus...
 Tags Environment, Systems
Read More

Trusting the grass to deliverJoining the sheep milkers