As a tribute to his late friend and master carver Vince Leonard, John Faulkner has plans to plant natives trees and shrubs around the Amuri Basin in Canterbury. Anne Lee reports on Faulkner’s vision to make the land look similar to that encountered by Maori settlers.

John Faulkner has a vision – a vision that would see pockets of native trees and shrubs planted out around the Amuri basin creating corridors for birdlife and re-creating some of the traditional food gathering and resting sites early Maori would have frequented.

It’s a big, ambitious vision that will depend on others getting on board but John says that by numerous land owners getting involved a little could go a long, long way.

He has started on his 47ha support block that borders the Waiau Uwha River just north of Culverden and has already planted about 3500 native trees and shrubs on a wide, riparian strip that includes about 2.5ha.

His first plantings started on the 154ha dairy farm just along the road, fencing off a riparian area restoring it with natives but it was during his time on the Hurunui/ Waiau Zone Committee that this broader idea for the area had its genesis. Through multiple discussions with Ngāi Tahu Rūnunga representatives he began to understand how early Māori had lived in the area, how they’d come at certain times of the year to collect seasonal plants and to fish from the rivers and wetlands.

He learned that they’d camp at specific sites in areas known as nohoanga – literally translated as a place to sit.

He also learned how important those food gathering expeditions were, the deeper meaning of mahinga kai and how it extends well beyond the fundamentals of fuelling the body to manaakitanga, showing true hospitality, caring and community.

John says he was also deeply affected by the sudden death of his friend and tohunga whakairo, master carver, Vince Leonard.

“After Vince died I just felt strongly that I needed to get on with the idea of restoring these native plant areas – it’s a way of honouring him and Māori, it’s a kind of koha.”

Looking back, and forward

But it’s not just for the past, it’s about looking forward too, for the future generations.

John put countless hours into Canterbury’s collaborative process for environmental management as a member and chair of the Hurunui/Waiau Zone Committee. It achieved a lot but it was a bruising and exhausting process and the committee is now in hiatus.

While he believes the collaborative process can work, he says those at the higher levels of organisations can stifle and hinder progress with entrenched views and dogma.

“I just want to get on with it. We know what we have to do.

“I think there are hundreds of me out there – farmers and people who just want to do stuff.

“They might belong to groups like Fish and Game or Forest and Bird but they’re not interested in politics and advocacy – they just want to get involved and do stuff – to make it happen.

“And that’s where I think we make the most progress – people just getting on with it together in a community.”

John’s first plantings on the support block’s riparian area were to recreate a nohoanga.

He had some help in drawing up a plan for the area but had “boxed on” using his own money to plant about 100 totara and 600 other plants.

John is on the governance committee of the Hurunui District Landcare Group (HDLG) – a group that includes about 140 farmers.

Through funding from the One Billion Trees Project, the HDLG has set up a catchment planting programme that will cover about 65ha of native plantings and 15ha of riparian planting.

John’s 2.5ha riparian strip was included and $50,000 was allocated to the restoration with another $25,000 of in-kind contribution coming from John.

His in-kind contribution has included on-going clearing of blackberry, gorse and broom and maintenance of the area, employing people to help, his time, irrigation and plant purchases.

Native plant and restoration project specialist Sue McGaw has come onboard thanks to the funding.

“Having Sue involved has been a huge turning point because she has the knowledge and expertise to plan out and oversee the plantings and know what’s going to grow well where.”

The aim is for John’s 2.5ha to act as the catalyst and example for other landowners along the 18km from the Twin Bridges to Waiau township to become part of a greater Waiau Uwha River riparian restoration project with HDLG facilitating the funding.

Sue’s very positive that John’s example will bring others into the larger project.

On his site she’s been creating specific biodiversity planting nodes with the aim to have Mahinga Kai and biodiversity at the heart of the plan.

In nature plants have communities so the planting nodes have groups of one plant species such as local kowhai or kanuka with a range of other species planted with them. It creates areas of interest and draws people along and it gives birds and animals such as skinks and lizards a smorgasbord of food and habitats, Sue says.

Planning is all important and taking the time to observe what grows in the district can add to what should be an extensive and varied list of plants to be included in a restoration project.

“You can’t get biodiversity without diversity,” she says.

“Go for a walk along the river bank or up a gully, open your eyes.”

She’s identified more than 43 species locally that will grow on John’s riparian block and has even gone to the trouble of having plants she’s found on her exploratory walks in the area formally identified by experts at the Allan Herbarium at Landcare Research in Lincoln.

She’s then worked with Goughs Nursery to have them propagated from the locally sourced plant material so they can be planted into the project – plants such as the Hebe Veronica traversii and Melicytus crassifolius. Check out our website for more plants in Sue’s extensive plant list for this site. Sue is also running her own study on a dryland plot on the support block.

She’s selected five species and has planted 30 of each species randomly in the area where they haven’t received any irrigation or pest protection.

Of the 150 individual plants only five have failed over what has been a long hot, dry summer. The dry area plants used in the experiment are Sophora prostrata, Coprosma propinqua, Corokia cotoneaster, Melicytus alpinus and Meuhlenbeckia axillaris.

“I think most farmers would have a 150- 250 square metre area on their farm they could fence off and plant species like these.

“It’s very doable to have pockets of plantings on farms all over a district that are within 4km of each other to create “bird hops” and we’ll see kereru and bellbirds and other native birds coming back into areas again.”

Investment into irrigation infrastructure, cutting nitrogen application rates and changes to the type of supplement used have all helped John Faulkner boost profitability while slashing his purchased nitrogen surplus but it hasn’t done much to cut methane emissions.

The 540-cow, 154ha effective farm at Mouse Point, north of Culverden was one of several farms this autumn that opened their farms to their peers and their books for analysis as part of DairyNZ’s Step Change programme.

It’s aiming to help farmers explore their options to decrease both nitrogen losses and greenhouse gas (GHG) emissions while holding or improving profitability.

Irrigation upgrades in the 2018/19 season, that included four new pivots and 196 pole sprinklers to replace Rotorainers,

have led to much improved pasture growth which allowed for 36ha of pasture renewal to be carried out in the following season. The upgrades are seeing an ongoing improvement in pasture growth and quality.

Return rates for irrigation were previously out to 13-days but they’re now back to three days with the pivots with much smaller rates of water applied each time, helping keep water within the root zone and reducing leaching losses.

This season John’s significantly dialled back the nitrogen from 280kg N/ha/year to close to 195kg N/ha/year by reducing the rates from 80kg N/ha/application to 70kg/ha in the first spring application in August followed by a 60kg N/ha application and a reduction to 50kg N/ha for each application after that.

“We do get down to a 21-day round here with rapid pasture growth so if we’re always following the cows we’re missing out on maximising the uptake of N which is at about that 28-day point.

“With twice-weekly, we’re putting more of what we’re applying on three or four days before the cows go into the paddock and with the pivots it’s usually irrigated in.

‘It means we’re getting closer to maximising the uptake and benefit of that N.

“It’s always a balance between maintaining pasture quality and getting optimum pasture eaten by grazing at the 3-leaf stage and managing the nitrogen timing.

“But our contract milker and his staff are very good at monitoring pasture and we’re seeing the benefits of that.”

This season more PKE has been used instead at a 2.4% N content.

“Together the lower nitrogen use and supplement changes have been largely responsible for a drop in purchased nitrogen surplus from 127kg N/ha to 60kg N/ha.”

This year’s operating profit is expected to take a leap too thanks to a drop in fertiliser nitrogen costs, a drop in repairs and maintenance costs – which had been higher in the last few seasons due to deferred maintenance – less money spent on supplement and a drop in the cost of homegrown feed (crops and silage making). Farm working expenses have dropped from $4.18/kg MS last season (excluding contract milker payments) to a projected $3.40/kg MS this season.

Unfortunately, GHG methane emissions have only improved slightly with the changes going from 12.6t CO2 equivalent/ha to 12.4t. 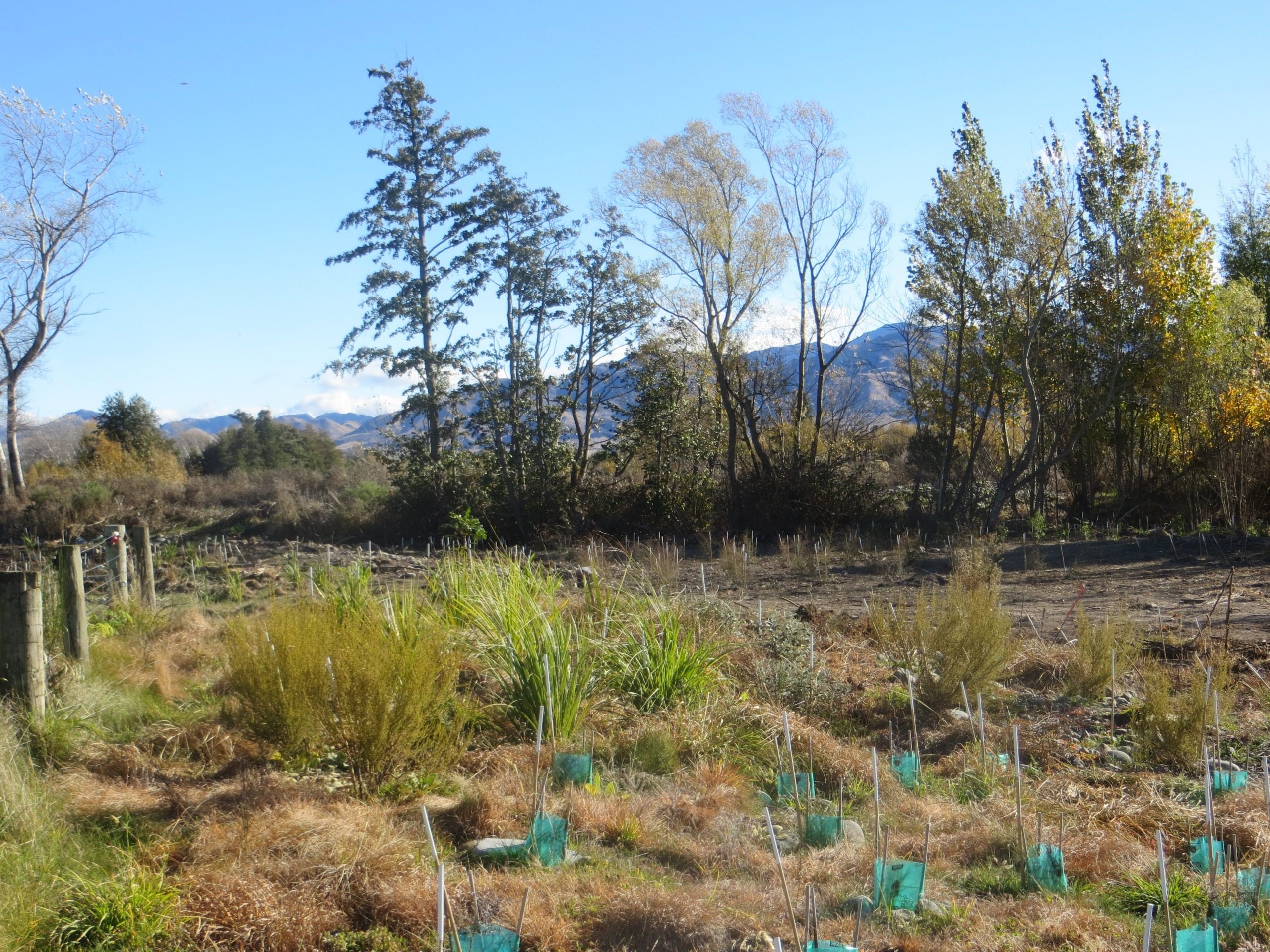 This is a very specific plant list to Lockerbie Farms in the Amuri basin and is based on research of species in the local area. Its aim is to restore and protect and shows how extensive a plant list can be when restoring native species and biodiversity.