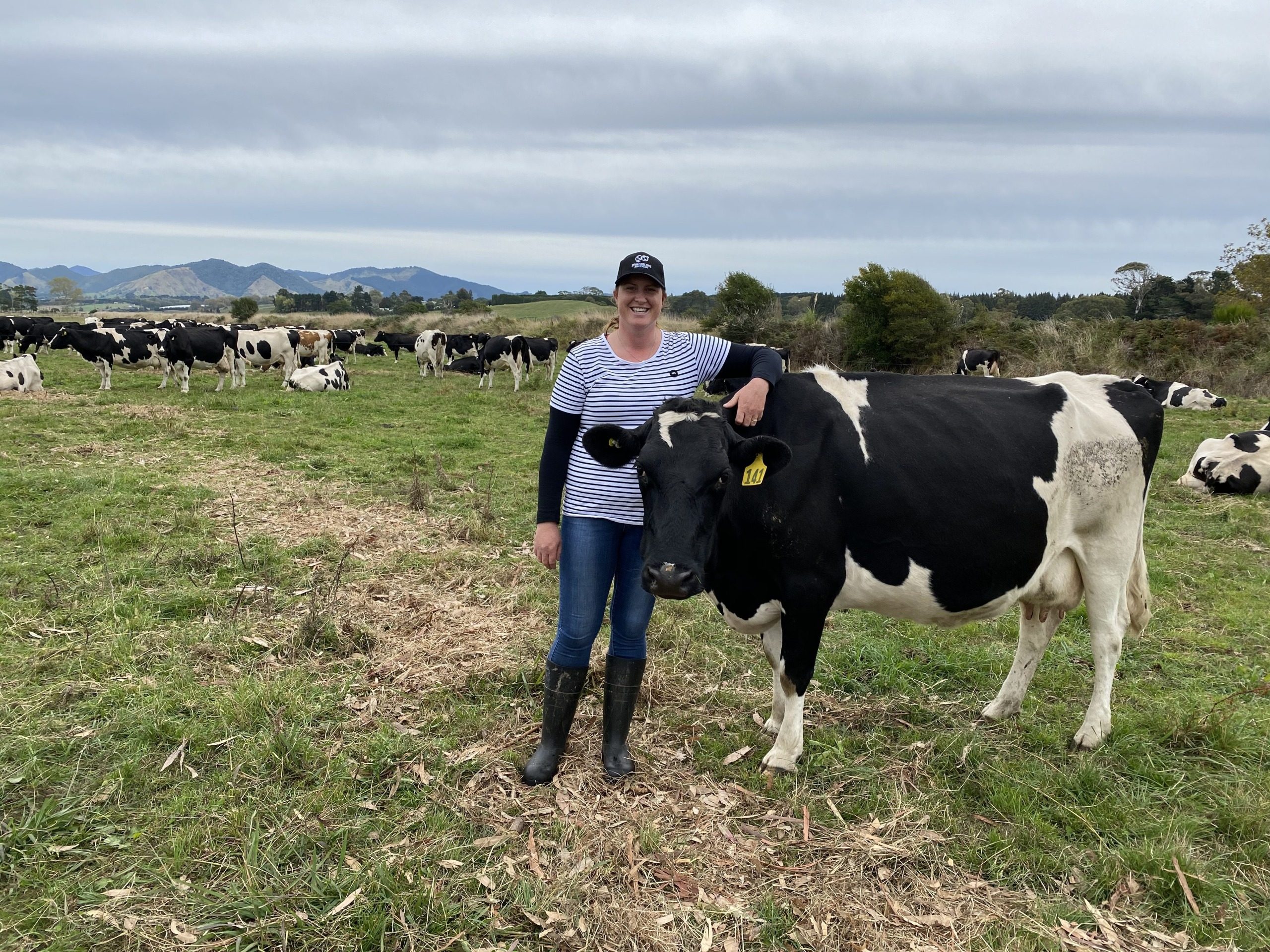 Making changes to cow management and feeding levels in winter and early spring helped Bay of Plenty farm manager Jessica Willis make huge strides in herd production and reproduction.
The 31-year-old ran a 48ha farm, milking 150 Holstein Friesians at Opotiki in the Bay of Plenty until May 2020. The flat property is below sea level and gets extremely wet during the winter and spring.
“It was a constant juggling act to ensure the cows didn’t pug paddocks and damage the pasture when it was wet,” says Jessica.
“Fortunately, the farm doesn’t flood. It has pumps to remove excess water but full drains keep the water table high.”
Jessica moved to the farm in June 2016 when it was bought by Alan Baird and Sandie Redpath-Baird.
Alan and Sandie, who own Wai-Moa Holstein Friesians, live in Rotorua where they milk 380 cows on a 120-hectare property.
“I had worked for Alan and Sandie on and off since I was at high school. It was an amazing opportunity to run my own farm,” says Jessica.
She spent the past four seasons increasing production and improving the genetic make-up of the herd.
“The herd came from a farm where they were milked only once a day. They were producing 280-300 kilograms of milksolids (kgMS) per cow.”
Jessica milked the herd twice a day from the start of calving in mid-July until dry off in May.
Production climbed to 60,000kg MS in the 2018-19 season, or 410kg MS per cow. The farm’s target last season was 64,000kg MS.
A focus on feeding and ensuring cows hit body condition score targets overhauled the herd’s reproductive performance.
The herd’s empty (not in calf) rate in the 2019-20 season was 11%. It usually sat between 18% and 20%.
“It was my best result ever. I was stoked. It was a great feeling to see tweaks in the cows’ feeding start to pay off.”
The herd’s important six-week in-calf rate, which is the percentage of cows pregnant in the first six weeks of mating, was 76%. The result was just 2% shy of the sector target of 78% but well above the industry average of 65%.
“Our six-week in-calf rate usually sat at around 60%,” says Jessica.
She attributes the good result to changes in cow management and feeding during the winter and spring months.
“Last winter was the first time we split the dry cows based on their body condition. We had a mob of fats and a mob of lighter cows.
“The heifers calved in better condition than previous years and held that condition longer into the spring.”
The farm bought in 100t of maize silage and 175t of a palm kernel expeller (PKE) blend annually. Jessica usually fed the maize from March to May to help put condition on cows ahead of dry off and the winter.
But in 2019 she kept feeding the maize right up until the start of mating at the beginning of October.
“Continuing to feed the maize through the spring helped the cows keep condition on their backs after calving and gave them an energy boost,” she says.
Jessica milked the herd through a 16-a-side herringbone shed.
Cows were tail painted when they left the colostrum mob, which enabled her to monitor pre-mating heats.
The farm plays a crucial role in helping to evaluate the performance of young breeding bulls.
It is a sire proving herd with CRV Ambreed, something Alan has always been passionate about.
Each spring the farm is provided with 100 straws of semen from about 10 new, young unproven bulls.
“We could use the straws to inseminate any cow,” says Jessica, who is also a trained artificial insemination technician.
“I enjoyed being part of the programme because it helps highlight the best bulls for the industry.”
The 2019-20 season was Jessica’s first year milking the first progeny-testing daughters born on the farm.
“There were some really good heifers in the group.”
She preferred the heifers born as the result of nominated matings. The business started using overseas genetics from World Wide Sires two years ago.
It also sources semen from other bulls through CRV Ambreed.
Jessica and Alan had a goal of breeding capacious cows with strong udders and high milk production.
The sires they have used in the past include Waihou Thadius Murphy S3F, Lornlace Rupert Dunstan, Maire Mint Geronimo, HSS Mint Rivington, Oakura Oman Overdrive and HSS Format Pascal-ET.
“They produced beautiful daughters with good, well-attached udders,” says Jessica.
Being a sire-proving herd meant all two-year-olds were scored for traits other than production (TOP) each spring.
About 50 replacement heifer calves were reared each year. Any surplus heifers eventually ended up at Alan and Sandie’s Rotorua dairy farm.
It has been six months of change for Jessica.
In mid-December last year she married Andrew Willis, an agri-business banker with ANZ.
A month earlier they bought a house in Rotorua where Andrew lives.
Jessica moved to the geyser city in late May, leaving behind the farm she had called home for the past four years.
“We’re keen to start a family and that’s hard to do if we both lived in different parts of the Bay of Plenty,” she says.
Jessica is still undecided about her next career move but aspires to own her own herd of Holstein Friesians one day.